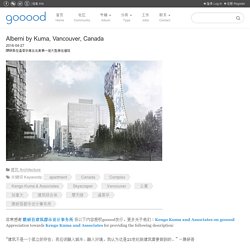 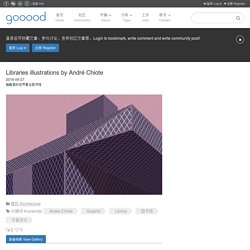 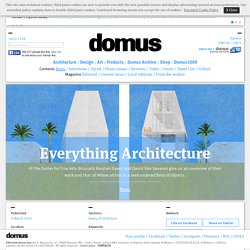 It is a place where practice and theory – creations and theoretical projects – stand side by side. The projects are direct, three-dimensional, and firmly rooted in architectural theory. The firm reduces architecture to its very essence and most original form: a limited set of basic geometric rules is used to create a framework within which life can be played out in all its complexity. Top: Office, Collage Office Dar Al Riffa. Sigalon's Environment/Energy Soup. BIG, Büro Ole Scheeren, and OMA have been announced as the three finalists in the competition to design the new Media Campus for AXEL SPRINGER SE in Berlin, Germany, beating out Kuehn Malvezzi and SANAA. 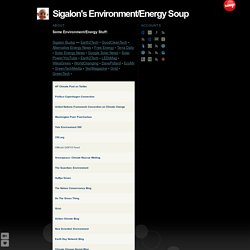 The final ranking will be released in January. The new campus will be located on the historic site of the former Berlin Wall, what was once a no-man’s land. All three proposals address this contentious history as well as the demands of a 21st century workplace. Research - bioLogic - Work in MIT Media Lab. BioLogic is growing living actuators and synthesizing responsive bio-skin in the era where bio is the new interface. 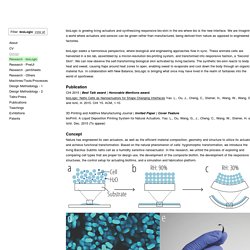 We are Imagining a world where actuators and sensors can be grown rather than manufactured, being derived from nature as opposed to engineered in factories. bioLogic seeks a harmonious perspective, where biological and engineering approaches flow in sync. Architecture and Freedom: Patrik Schumacher. <div class='bg-primary'><div class='white mw8 center pal tc'><img src=" alt="Audioboom logo black and white 280 120 b88e785e28ac617d782143393250002fa1caed2d743e8a34c4d74d988e20e931" /><h1 class='f1'>audioBoom uses Javascript</h1><h2 class='f2'>Please enable it in your browser's preferences. 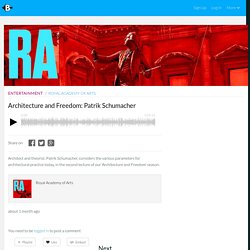 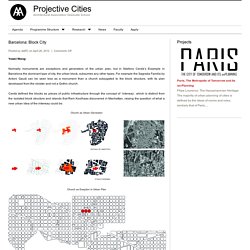 For example the Sagrada Familia by Antoni Gaudi can be seen less as a monument than a church subjugated to the block structure, with its plan developed from the cloister and not a Gothic church. Cerdà defined the blocks as pieces of public infrastructure through the concept of ‘interway’, which is distinct from the isolated block structure and islands that Rem Koolhaas discovered in Manhattan, raising the question of what a new urban idea of the interway could be. Bezier Surface. Written by Paul Bourke December 1996 Contribution by Prashanth Udupa on Bezier Surfaces in VTK Designer 2: Bezier_VTKD2.pdf The Bézier surface is formed as the cartesian product of the blending functions of two orthogonal Bézier curves. 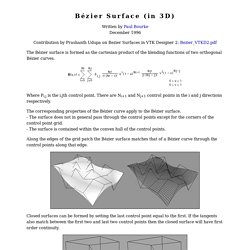 Where Pi,j is the i,jth control point. CS563 Presentations '95. Bézier surface. History[edit] Equation[edit] Sample Bézier surface; red - control points, blue - control grid, black - surface approximation A two-dimensional Bézier surface can be defined as a parametric surface where the position of a point p as a function of the parametric coordinates u, v is given by: [1] evaluated over the unit square, where is a Bernstein polynomial, and. 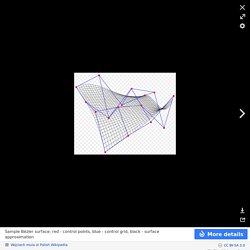 A Unified Agenda for Architecture: The Built Environment as Frame and Interface of Communication. What I am proposing is a global, unified epochal style for architecture, urbanism and all the design disciplines (parametricism[i]), argued for within a comprehensive, unified theory of architecture/design (the theory of architectural autopoiesis) that is embedded within an overarching theory of society (Luhmann’s social systems theory). 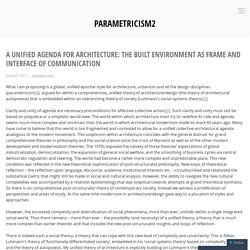 [ii] Clarity and unity of agenda are necessary preconditions for effective collective action[iii]. Such clarity and unity must not be based on prejudice or a simplistic world view. Themes Archives for Bernard Tschumi. Subclip Patrik Schumacher shifts his discussion from projects to the ideas behind them. He argues that architecture is a system of communication, specifically engaged with framing communicative interaction. He presents examples from vernacular pre-industrial settlements through Robert Venturi and Bernard Tschumi. Somol addresses difference in diagramming. He sites Colin Rowe’s Mathematics of the Ideal Villa as an example of starting with configurations of sameness and repetition and then identifying difference secondarily.

Canadian architecture firms, their projects at home & abroad, and the broader built environment. Two individuals, from separate professional backgrounds, and from different parts of the globe, give answers to our question of the week. Model. Experimental Projects. Experimental Projects. Untitled. Space Symmetry Structure. These are Rheotomic Surfaces – from the Greek Rheo – flow and Tomos – cut or section (as in tomography) The horizontal sections of these surfaces correspond to the moving equipotential lines of a 2D Laplacian flow, with height mapped to time.

Such surfaces are complete, embedded and walkably connected. Minimal surface. Triply Periodic Minimal Surfaces. OMA's Reinier de Graaf on EU exits. Opinion: in the noughties, architects OMA worked on a series of optimistic projects for the European Union, including a proposal for a colourful EU Barcode flag and an exhibition suggesting that a united Europe "could be fun". With the EU looking increasingly fragile, OMA partner Reinier de Graaf wonders if they should have bothered. A little over 10 years ago, on the occasion of the Dutch EU presidency of 2004, our office designed an exhibition about Europe. The venue: a circus tent set up on the Place Schuman in the heart of Brussels' European Quarter. The tent, produced especially for the exhibition, was a kind of chromatic spectrum of every single colour of every single flag of every single EU member state. The idea was that the EU could be fun. NUVIS: Urban Design by NUVIS. Sách Kiến trúc - Photos du journal.