The Rise of DIY Libraries. Photo courtesy of Biblioteca Aeromoto. 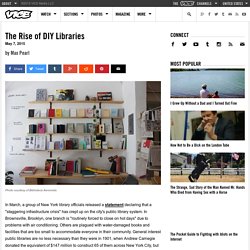 In March, a group of New York library officials released a statement declaring that a "staggering infrastructure crisis" has crept up on the city's public library system. In Brownsville, Brooklyn, one branch is "routinely forced to close on hot days" due to problems with air conditioning. Others are plagued with water-damaged books and facilities that are too small to accommodate everyone in their community. General interest public libraries are no less necessary than they were in 1901, when Andrew Carnegie donated the equivalent of $147 million to construct 65 of them across New York City, but their focus is increasingly shifting away from books and toward things like English classes, job training workshops, community meeting spaces, or just places to read the news online for those without internet access.

Photo courtesy of Personal Libraries Library. Libraries could outlast the internet, head of British Library says. Critically, he told an audience, the history of the institutions had allowed them to build up trust with members of the public. 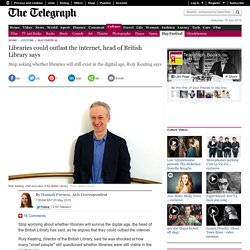 "I was surprised, and continue to be, how many smart people ask me in all seriousness 'do we really still need these library things in this age of smart phones, search engines' and so on? " he said. 6 Terms that Instantly Reveal You as a Librarian. Few professions are as steeped in tradition and esoteric knowledge as librarianship. 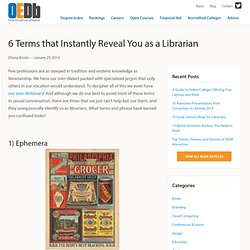 We have our own dialect packed with specialized jargon that only others in our vocation would understand. To decipher all of this we even have our own dictionary! And although we do our best to avoid most of these terms in casual conversation, there are times that we just can’t help but use them, and they unequivocally identify us as librarians. What terms and phrase have earned you confused looks? Before Google ... Who Knew? : The Protojournalist. 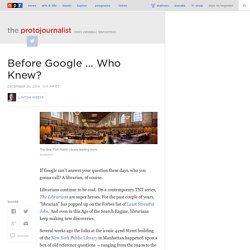 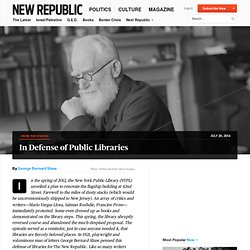 Farewell to the miles of dusty stacks (which would be unceremoniously shipped to New Jersey). An array of critics and writers—Mario Vargas Llosa, Salman Rushdie, Francine Prose—immediately protested. Some even dressed up as books and demonstrated on the library steps. This spring, the library abruptly reversed course and abandoned the much-despised proposal. Hoe zorg je dat 37 collega's het wiel niet opnieuw uitvinden? Knowmads. Love for the Library: A Reading List. My New Year’s resolution for 2014: forgo book-buying—just for a year. 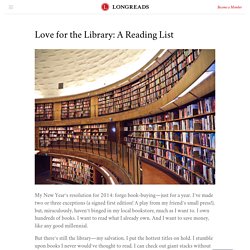 I’ve made two or three exceptions (a signed first edition! A play from my friend’s small press!) Maria Popova on information in the digital age. Social media in de organisatie: kennis delen, is kennis maken. The history of information. The Library of the Future Is Here. Forget what you know about the library of the 20th century. 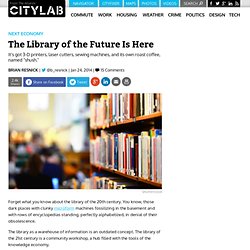 You know, those dark places with clunky microform machines fossilizing in the basement and with rows of encyclopedias standing, perfectly alphabetized, in denial of their obsolescence. The library as a warehouse of information is an outdated concept. The library of the 21st century is a community workshop, a hub filled with the tools of the knowledge economy. "If we can't shine in this environment, in this economy, shame on us," says Corinne Hill, the director of library system in Chattanooga, Tennessee—a system that has thoroughly migrated into the current era.

The library of the 21st century still has books, but it also has 3-D printers, laser cutters, sewing machines, and spaces for conducting business meetings. The Low-Tech Appeal of Little Free Libraries. The "take a book, return a book" boxes are catching in even on places where Kindles and brick-and-mortar books abound. 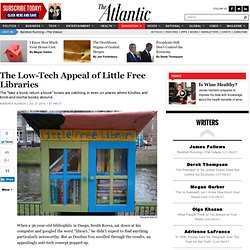 Margret Aldrich When a 36-year-old bibliophile in Daegu, South Korea, sat down at his computer and googled the word “library,” he didn’t expect to find anything particularly noteworthy. The Mission of Librarians is to Empower. Empower - give (someone) the authority or power to do something – Oxford Dictionary of American English Someone whom I greatly admire recently set me thinking about the mission of librarians. 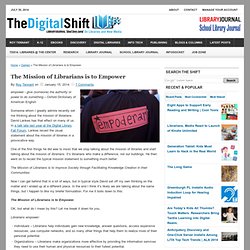 David Lankes has that effect on many of us. Things That Make the Librarian Angry — The Message. In library school we learned a lot about the reference interview; how to take what a patron was saying and convert it into an information need even when the patron might not even know exactly what they wanted. 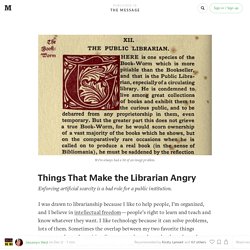 The question “Can I do this?” Has a range of answers depending on what exactly is being asked. Is it technologically possible? Why Libraries [Still] Matter — Biblio. Despite these appearance, libraries — real ones concerned with guarding and curating knowledge — remain crucial to free and open societies, and not simply because their traditional services within academia, from curation to preservation to research, remain in high demand by scholars.

More broadly, they crucially complement the Web in its highest aspirations: to provide unfettered access to knowledge, and to link authors and readers in new ways. Here’s why. First, information may be easy to copy, but it’s also easy to poison and destroy.