Animals (Wildlife) Index. Extinction/ Prehistoric Life/Fossils. Dinosaurs. Millions of years ago, long before there were any people, there were dinosaurs. 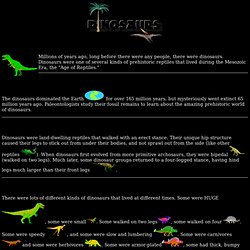 Dinosaurs were one of several kinds of prehistoric reptiles that lived during the Mesozoic Era, the "Age of Reptiles. " The dinosaurs dominated the Earth for over 165 million years, but mysteriously went extinct 65 million years ago. Paleontologists study their fossil remains to learn about the amazing prehistoric world of dinosaurs. Dinosaurs were land-dwelling reptiles that walked with an erect stance. ). (walked on two legs). There were lots of different kinds of dinosaurs that lived at different times. . , some were small. BBC Nature - Dinosaurs videos, news and facts. Io's Endangered Species.

Endangered Animals PBL. Prehistoric Animals Video. How to Make a Worm Compost. Turning Wastes Into Resources. Red Worm Composting. Www.sfenvironmentkids.org/teacher/activities/Worm_Ed_Packet.pdf. How to Make Your Own Worm Compost System: 10 Steps. Steps Part 1 of 3: Making a Home for Your Worms 1Obtain a worm bin. 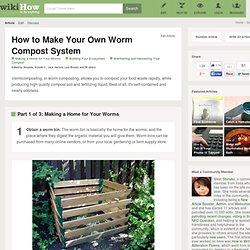 The worm bin is basically the home for the worms, and the place where they digest the organic material you will give them. Worm bins can be purchased from many online vendors, or from your local gardening or farm supply store. Ad 2If you don't want to buy a worm bin, you can also build one on your own. 3Use four old car tires for a makeshift home. Part 2 of 3: Building Your Ecosystem. DragonflyTV . Episodes . Technology and Invention . Worm Farm. Worm Farm by Kevin I love trash! 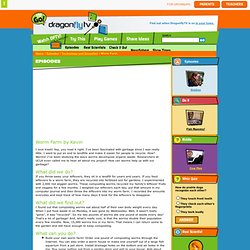 Yep, you read it right. I've been fascinated with garbage since I was really little. I want to put an end to landfills and make it easier for people to recycle. How? What did we do? What did we find out? What can you do? Human Impact on the Environment. Every living thing has an impact on its environment. 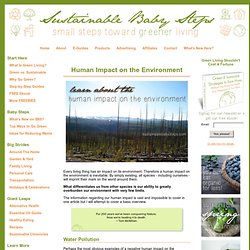 Therefore a human impact on the environment is inevitable. By simply existing, all species - including ourselves - will imprint their mark on the world around them. What differentiates us from other species is our ability to greatly overburden our environment with very few limits. The information regarding our human impact is vast and impossible to cover in one article but I will attempt to cover a basic overview. For 200 years we've been conquering Nature. Water Pollution Perhaps the most obvious examples of a negative human impact on the environment is water pollution. Your Top 16 Ways To Go Green (First and Most Impactful Steps) The following ways to go green are among the first and most impactful steps you can take toward sustainable (and meaningful) living. 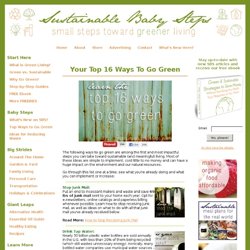 Most of these ideas are simple to implement, cost little to no money and can have a huge impact on the environment and our natural resources. Go through this list one at a time, see what you're already doing and what you can implement or increase: Stop Junk Mail: Put an end to incessant mailers and waste and save 69 lbs of junk mail sent to your home each year. Opt for e-newsletters, online catalogs and paperless billing whenever possible. Learn how to stop receiving junk mail, as well as ideas on what to do with all that junk mail you've already received below.

Read More: How to Stop Receiving Junk Mail Drink Tap Water: Nearly 30 billion plastic water bottles are sold annually in the U.S. with less than 20% of them being recycled (which still wastes unnecssary energy). Read More: Choosing a Safe Stainless Steel Water Bottles. All About: Cocoons, Hatchlings, Juveniles and Adult Red Worms. Cocoons: A cocoon is a small, yellow, lemon colored and lemon shaped object that is produced by red wiggler mating. 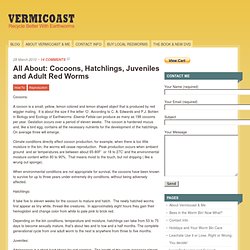 It is about the size if the letter ‘O’. According to C. A. Edwards and P.J. Climate conditions directly effect cocoon production, for example, when there is too little moisture in the bin, the worms will cease reproduction. When environmental conditions are not appropriate for survival, the cocoons have been known to survive for up to three years under extremely dry conditions, without being adversely affected. Red Wiggler Worms vs. Nightcrawler Earthworms. 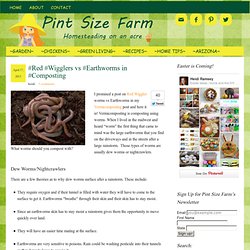 I promised a post on Red Wiggler worms vs Earthworms in my Vermicomposting post and here it is! Vermicomposting is composting using worms. When I lived in the midwest and heard “worm” the first thing that came to mind was the large earthworms that you find on the driveways and in the streets after a large rainstorm. Differences Between Red Wrigglers & Earthworms. Generally, "earthworm" is a term used to refer to any worm whose body is segmented, burrows into the soil and belong to the class Oligochaeta. 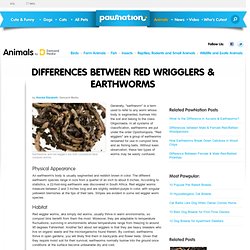 In all systems of classification, earthworms are put under the order Opisthoropora. "Red wigglers" are a group of earthworms renowned for use in compost bins and as fishing baits. Without keen observation, these two types of worms may be easily confused. Red wiggler worms, aka simply red worms, usually thrive in warm environments, so compost bins benefit from them the most. Moreover, they are adaptable to temperature fluctuations, surviving in environments whose temperatures range from freezing to around 95 degrees Fahrenheit. Author. What Red Wiggler Worm Egg Capsules Look Like. Red Wigglers and Heat. 2nd Grade Life Science.