Forest debates rage on after a fire. By Dylan Darling The visual impact of a wildfire once the flames are gone can be just as dramatic as the blaze itself. 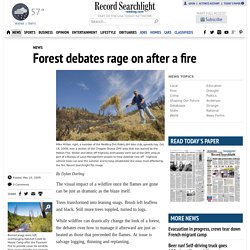 Trees transformed into leaning snags. Brush left leafless and black. Still more trees toppled, turned to logs. While wildfire can drastically change the look of a forest, the debates over how to manage it afterward are just as heated as those that preceeded the flames. Salvage logging and replanting efforts on federal land often draw the same legal challenges from environmental groups as do timber sales and thinning projects. U.S. Wildfire Cost-Plus-Loss Economics Project: The “One-Pager” Checklist. Timber Harvested vs. Burned. May The Lights Go Out At The Ninth Circuit Court.

Unless you've just returned from Mars, you know that there is ahelluva forest fire burning in the Stanislaus National Forest and neighboring Yosemite National Park. 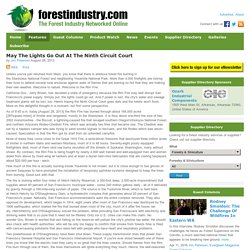 More than 4,000 firefights are risking their lives to defend several rural enclaves against walls of flames that are burning so hot that they are making their own weather. Welcome to nature. Welcome to the Rim Fire. California Gov., Jerry Brown, has declared a state of emergency because the Rim Fire may well disrupt San Francisco's power supply. Simply put, the lights could go out. As of 8:45 a.m. today [August 28, 2013] the Rim Fire has burned through about 184,000 acres [287square miles] of timber and rangeland, mostly in the Stanislaus. None of these fires come close to the Great 1910 Fire, a wind-driven firestorm that destroyed three million acres of timber in northern Idaho and western Montana, most of it in 48 hours.

Two powerhouses at O'Shaughnessy have been shut down. Post-fire logging can reduce fuels for up to 40 years in regenerating forests, new study finds. WENATCHEE, Wash. 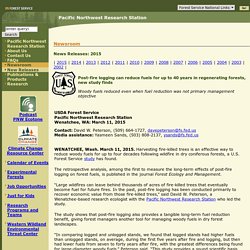 March 11, 2015. Harvesting fire-killed trees is an effective way to reduce woody fuels for up to four decades following wildfire in dry coniferous forests, a U.S. Forest Service study has found. The retrospective analysis, among the first to measure the long-term effects of post-fire logging on forest fuels, is published in the journal Forest Ecology and Management. “Large wildfires can leave behind thousands of acres of fire-killed trees that eventually become fuel for future fires. The study shows that post-fire logging also provides a tangible long-term fuel reduction benefit, giving forest managers another tool for managing woody fuels in dry forest landscapes. The researchers’ analysis revealed that, in unlogged stands, surface woody fuel levels were low shortly after wildfire, peaked 10 to 20 years after wildfire, and then declined gradually out to 39 years past the wildfire.

Massive salvage logging under way at Colville after wildfires

Horror in the forest: Wildfires leave their mark on 9.4 million acres. Photo by Sharganov Aleksandr via Shutterstock.com A LIVING NIGHTMARE: Wildfires across the country have torched 9.4 million acres this year, with many under the jurisdiction of federal agencies. 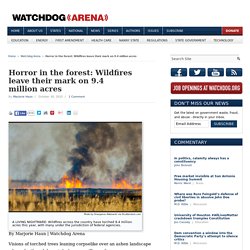 By Marjorie Haun | Watchdog Arena Visions of torched trees leaning corpselike over an ashen landscape where death and despair lurks over millions of acres are unfortunately not scenes from a science-fiction horror movie. Incident Management Situation Report. Extremist Greens reveal environmental hypocrisy by ignoring wildfire impact - American Lands Council. Fuller Fire near Grand Canyon National Park, July 2016 On August 1, 2016 there are 196 major fires burning on federally-controlled lands, most of which are in western states. 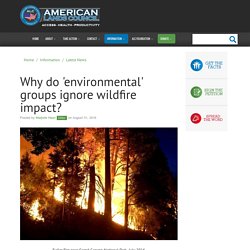 Many are under a hundred acres, but there are several active fires exceeding 30-40,000 acres in size. Strangely, the Sierra Club and Center for Biological Diversity are promoting an end to domestic energy production while ignoring the vast amounts of smoke, soot, ash, haze, CO2, carcinogenic pollution, related erosion and other environmental degradation caused by wildfires on federally controlled public lands as we speak. Strangely, these green groups who claim to care about the environment are rarely supportive of vegetation management that would prevent huge wildfires. This appears to be an attempt to deflect attention away from the truly devastating environmental impact of wildfires on federally-controlled lands while attacking the energy industry for far less significant impacts. Fallout: Forest Service logging undercuts fire victims' recovery efforts. Fallout Forest Service logging undercuts fire victims' recovery efforts Aug. 12, 2016 The Canyon Creek inferno wiped out decades of future timber harvests in eastern Oregon. 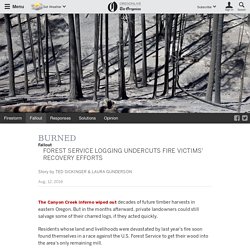 But in the months afterward, private landowners could still salvage some of their charred logs, if they acted quickly. Residents whose land and livelihoods were devastated by last year's fire soon found themselves in a race against the U.S. Congressman McClintock Comments on Priorities and Missions of the Forest Service and the President's FY2017 Budget Proposal. March 23, 2016- Congressman McClintock is the Chairman of the Federal Lands Subcommittee. 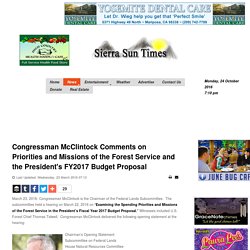 The Subcommittee on Federal Lands meets to review the President’s proposed budget for the U.S. Forest Service for Fiscal Year 2017.