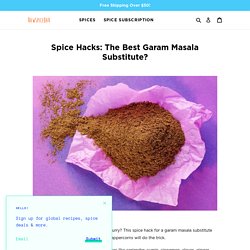 This spice hack for a garam masala substitute of coriander, cumin, cinnamon & black peppercorns will do the trick. Garam masala is a warming blend of spices like coriander, cumin, cinnamon, cloves, ginger, cardamom and nutmeg. First, whole spices are toasted in a dry pan for a minute to release flavor oils, then freshly ground. It is the core flavor base of many South Asian dishes and varies regionally as well as from one cook to another. Be wary of bottled “garam masala” and other Indian spices or masalas on store shelves- often ground months ago and cheapened by reducing or removing cardamom, nutmeg and the other expensive spices.

Authentic garam masala spice blend will have anywhere from 20 to 30 ingredients, or more. If you're totally out of garam masala or yours has been sitting on the shelf for far too many months (or years!) These are some of the best garam masala substitutes: Spice Blends: Masala Curry Powder Sambhar Masala Chaat Masala. Sour Cream Substitutions With Dairy Free Options. Sour cream is one of those ingredients that can be found in both sweet and savory recipes as well as cooked dishes and baked goods. 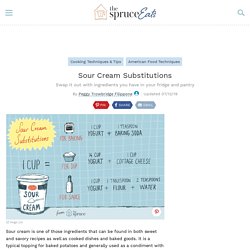 It is a typical topping for baked potatoes and generally used as a condiment with Mexican dishes such as nachos, but can also be the main ingredient in breads, appetizers, and desserts. It adds richness, moistness, and even lightens up a recipe. But, sour cream has a high-fat content, something that the fat-conscious cook or diner may want to avoid. And, as it is made of cream, it is not safe for a dairy-free diet or those who are vegan. Luckily, there are other ingredients you can use to substitute for sour cream, from plain yogurt to evaporated milk to cottage cheese.

Plain Yogurt Yogurt is an excellent substitute for sour cream in most recipes, but keep in mind it is thinner in texture. To substitute 1 cup of sour cream in a baking recipe, use 1 cup yogurt plus 1 teaspoon baking soda. Buttermilk or Sour Milk Cottage Cheese and Cream Cheese Evaporated Milk. The Best Coriander Substitutes to Try. Out of coriander or not a fan of the way it tastes? 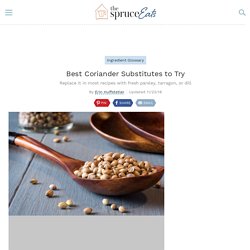 To find a proper substitute for coriander, you first need to understand what your recipe means by "coriander. " In the United States, coriander typically refers to coriander seed or ground coriander, while cilantro is the term used to refer to the fresh leaves of the coriander plant. In the United Kingdom, however, "coriander" refers to the fresh leaves, and the seeds are known as coriander seed or ground coriander. Confusing? Definitely. Cilantro/Coriander Leaf Substitute Replace the coriander called for in your recipe with an equal amount of fresh parsley, tarragon, dill or a combination of the three. 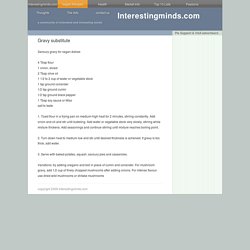 Toast flour in a frying pan on medium-high heat for 2 minutes, stirring constantly. Add onion and oil and stir until bubbling. 2. 3. Variations: try adding oregano and bsil in place of cumin and coriander. Gravy Substitute Ideas by FitGal. You may be looking for gravy substitute ideas because the traditional gravy is full of fat, sodium and calories, of course. 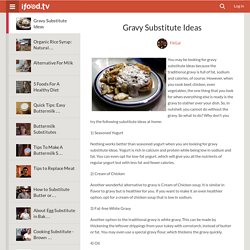 However, when you cook beef, chicken, even vegetables, the one thing that you look for when everything else is ready is the gravy to slather over your dish. So, in nutshell, you cannot do without the gravy. So what to do? Why don't you try the following substitute ideas at home: 1) Seasoned Yogurt Nothing works better than seasoned yogurt when you are looking for gravy substitute ideas. 2) Cream of Chicken Another wonderful alternative to gravy is Cream of Chicken soup. 3) Fat-free White Gravy Another option to the traditional gravy is white gravy. 4) Oil Vegetable oil can be subsituted in place of butter or clarified butter, as a healthier option to gravy. 5) Margarine If you use margarine, especially one that is trans-fat free, instead of the butter to make your gravy, you will have a healthier substitute at hand.

Image Courtesy: ifood.tv. What Can Be Used as a Substitute for Creme Fraiche? Fish Sauce Substitute. Common Ingredient Substitutions Article.