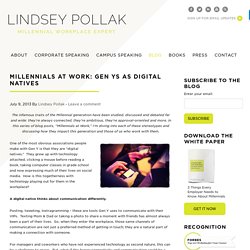 In this series of blog posts, “Millennials at Work,” I’m diving into each of these stereotypes and discussing how they impact this generation and those of us who work with them. One of the most obvious associations people make with Gen Y is that they are “digital natives.” They grew up with technology attached, clicking a mouse before reading a book, taking computer classes in grade school and now expressing much of their lives on social media. How is this togetherness with technology playing out for them in the workplace? A digital native thinks about communication differently. Digital magazines: how popular are they? Despite some big rises in circulation, digital editions still make up only a small part of a magazine's overall circulation. 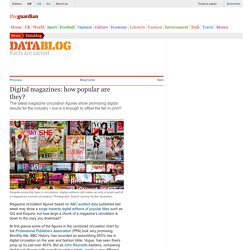 Photograph: David Levene for the Guardian Magazine circulation figures based on ABC-audited data published last week may show a surge towards digital editions of popular titles such as GQ and Esquire, but how large a chunk of a magazine's circulation is down to the copy you download? At first glance some of the figures in the combined circulation chart by the Professional Publishers Association (PPA) look very promising. Monthly title, BBC History, has recorded an astonishing 693% rise in digital circulation on the year and fashion bible, Vogue, has seen theirs jump up by just over 463%. Magazine ABCs: Marie Claire suffers steepest decline in lifestyle sector. Data from the Audit Bureau of Circulations revealed Marie Claire's average monthly joint print and digital circulation fell by 11.2 per cent in the first half of the year, when compared with the previous six-month reporting period from July to December 2013. 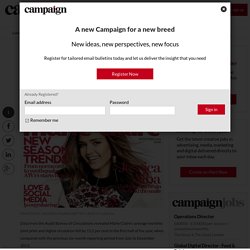 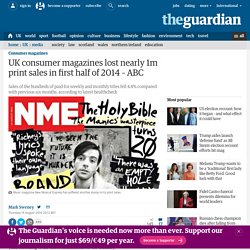 As publishers continue to search for alternative revenue streams from the internet and digital products, the Audit Bureau of Circulations said on Thursday sales of the hundreds of paid-for weekly and monthly titles fell 4.4% compared with the previous six months. Even venerable titles such as the 62-year-old New Musical Express were far from immune, its weekly circulation falling to 14,000, down 28% from a year ago. 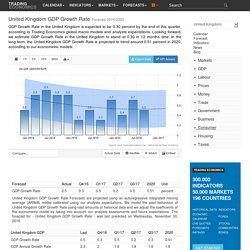 To add alerts for more indicators click here. Fears rise that tablets won't save magazines as digital sales fall - Online - Media. Hopes that the tablet was the saviour of magazines have been undermined by official figures showing a fall-off in sales of digital editions of iconic publications including the fashion titles Harper’s Bazaar, Elle and Vogue. 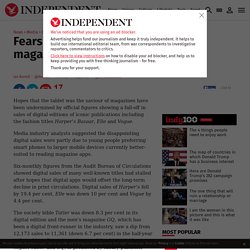 Media industry analysts suggested the disappointing digital sales were partly due to young people preferring smart phones to larger mobile devices currently better-suited to reading magazine apps. Six-monthly figures from the Audit Bureau of Circulations showed digital sales of many well-known titles had stalled after hopes that digital apps would offset the long-term decline in print circulations. Digital sales of Harper’s fell by 19.4 per cent, Elle was down 10 per cent and Vogue by 4.4 per cent. The society bible Tatler was down 8.3 per cent in its digital edition and the men’s magazine GQ, which has been a digital front-runner in the industry, saw a dip from 12,173 sales to 11,361 (down 6.7 per cent) in the half-year to June 2014. UK consumer magazines lost nearly 1m print sales in first half of 2014 – ABC. Print consumption continues to fall and paywalls aren't helping. The fact of declining print readership of newspapers and magazines won’t come as a surprise to anyone who has been paying attention over the past decade or so, but the real impact can be felt when someone puts hard numbers on that trend—as depressing as it might be for traditional print-focused publishers. 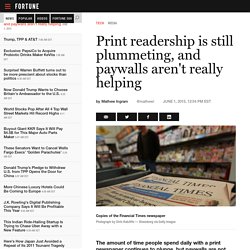 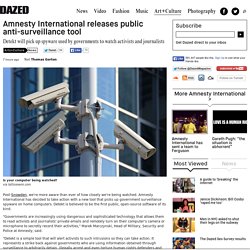 Amnesty International has decided to take action with a new tool that picks up government surveillance spyware on home computers. Detekt is believed to be the first public, open-source software of its kind. "Governments are increasingly using dangerous and sophisticated technology that allows them to read activists and journalists’ private emails and remotely turn on their computer’s camera or microphone to secretly record their activities," Marek Marczynski, Head of Military, Security and Police at Amnesty, said.

Scientists develop thought-controlled gene switch. 11 November 2014Last updated at 11:15 ET By Melissa Hogenboom Science reporter, BBC News The LED light was implanted in mice and when switched on, activated gene expression Genes can be switched on using the power of thought, a study reports. 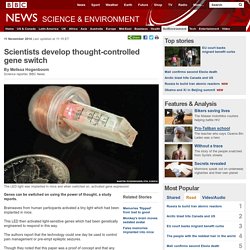 Want to control your dreams? All you need is electricity. Lucid dreaming is the term given to those beautiful moments when you realise that you're dreaming, when you're engaged in a a conscious walkthrough of an otherwise dormant subconscious. 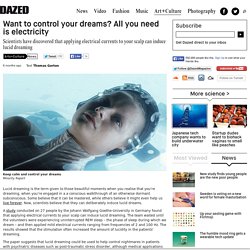 Some believe that it can be mastered, while others believe it might even help us live forever. Now, scientists believe that they can deliberately induce lucid dreams. Dialing With Your Thoughts. Your Brain Is "Hard-Wired" To React Without Thinking. Ever stop to wonder how you’re able to immediately link something you see with something you do? Turns out, we do many things without thinking about it because our brains are hardwired to react, and scientists may have found the pathway in the brain that makes that connection.

Take, for example, a simple game of basketball. When several players jump for the ball at the same time, each one must track visual information about the ball’s whereabouts as well as his own hand, while ignoring the other players' hands, the cheering fans, and other distractions -- all within seconds. Are we close to making human ‘mind control’ a reality? Mind control used to switch on genes. Direct Brain-To-Brain Communication Used in Humans. Tapping directly into someone’s brain in order to share thoughts isn’t just for Spock anymore. An international team of researchers were able to replicate the Vulcan Mind Meld by creating a device that allows two people to share information through thought.

The researchers tested the technology by separating the users over 8,000 km (5,000 mi) apart—with one user in France and the other in India. The paper has been published in PLOS ONE. "We wanted to find out if one could communicate directly between two people by reading out the brain activity from one person and injecting brain activity into the second person, and do so across great physical distances by leveraging existing communication pathways," co-author Alvaro Pascual-Leone said in a press release. Population controls 'will not solve environment issues'

27 October 2014Last updated at 17:50 ET By Matt McGrath Environment correspondent, BBC News Nargis, born in 2011, was named the world's seven billionth person by Plan International Restricting population growth will not solve global issues of sustainability in the short term, new research says. A worldwide one-child policy would mean the number of people in 2100 remained around current levels, according to a study published in the Proceedings of the National Academy of Sciences.

Chattering brain cells hold the key to the language of the mind. Samsung works on mind-control tablet. 23 April 2013Last updated at 12:21 ET. "Behind the Mirror": Another Mind Control-Themed Fashion Movie. Exploiting Bacteria to Produce "Living Materials" Art in the drone age. Taken from the June 2013 issue of Dazed: The future rarely comes to pass the way we imagine, or, more accurately, as we hope for.