How to Find Out Who’s Tracking You Through Your Smartphone. Safety should always be our top priority. 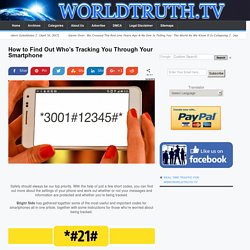 With the help of just a few short codes, you can find out more about the settings of your phone and work out whether or not your messages and information are protected and whether you’re being tracked. Bright Side has gathered together some of the most useful and important codes for smartphones all in one article, together with some instructions for those who’re worried about being tracked. With this code, you can find out whether your calls, messages, and other data are being diverted. The status of the different types of diversions that are taking place along with the number the information is being transferred to will be displayed on your phone’s screen.

This function is most often set up by either jealous partners or parents who are trying to protect their kids from spam or criminals. Dial this code if you want to find out where calls, messages, and data are being redirected to if it seems that no one can get through to you. Step 1. It's Official! The Pyramid Builders Knew The Laws Of Universal Gravitation! Unbelievable!

The secret is discovered! 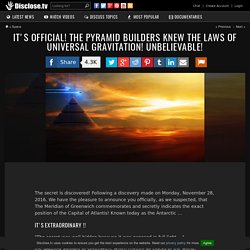 Russia Spills The Beans: Antarctica, It’s Not What We’re Being Told! Will This Be The Real Jurassic Park? Ground-penetrating radar has discovered another continent under the Antarctic ice. 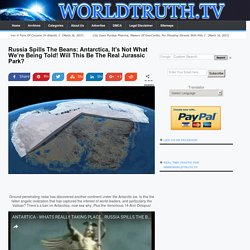 Is this the fallen angelic civilization that has captured the interest of world leaders, and particularly the Vatican? There’s a ban on Antarctica, now see why. Plus the Venomous 14-Arm Octopus! Russian Scientists in Antarctica battle Organism 46b, Antarctic Creature, Lake Vostok Octopus. JFK 50-year cover-up, ‘Sequestering’ 9/11 first responders, Cops becoming Stormtroopers RT — Breaking the Set.

On this episode of Breaking the Set, Abby Martin talks to Russ Baker, managing editor of WhoWhatWhy.com, about President Obama withholding more than 50,000 pages of JFK assassination-related documents, and looks at the unanswered questions in the case. 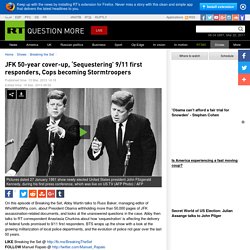 Abby then talks to RT correspondent Anastasia Churkina about how ‘sequestration’ is affecting the delivery of federal funds promised to 9/11 first responders. THEY LOOK LIKE PEOPLE. Russia Spills The Beans: Antarctica, It’s Not What We’re Being Told! Will This Be The Real Jurassic Park? Patent US6506148 - Nervous system manipulation by electromagnetic fields from monitors - Google Patents. The invention relates to the stimulation of the human nervous system by an electromagnetic field applied externally to the body. A neurological effect of external electric fields has been mentioned by Wiener (1958), in a discussion of the bunching of brain waves through nonlinear interactions. The electric field was arranged to provide “a direct electrical driving of the brain”. Wiener describes the field as set up by a 10 Hz alternating voltage of 400 V applied in a room between ceiling and ground.

Brennan (1992) describes in U.S. Hitler’s Mind Control Experiments and How They Influenced Modern Propaganda. By: Karla Fetrow The CIA’s Secret Agreement with Third Reich Scientists A new age has dawned on all of us; an age of remarkable technology. 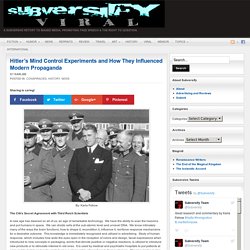 We have the ability to scan the heavens and put humans in space. We can divide cells at the sub-atomic level and unravel DNA. We know intimately many of the ways the brain functions; how to shape it, recondition it, influence it, reinforce response mechanisms for a desirable outcome. Patent US6506148 - Nervous system manipulation by electromagnetic fields from monitors - Google Patents.

Mind Control is Real: United States Patent 6506148 B2 Confirms Human Nervous System Can be Manipulated Through Electromagnetic Fields from Monitors. The subject of mind control has been keenly contested for some time now. 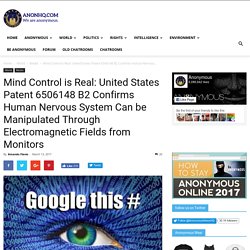 Mind or thought control is broadly defined as human subjects being indoctrinated in a way that causes an impairment of autonomy – the inability to think independently, and a disruption of beliefs and affiliations. Mind control was initially considered a mere conspiracy theory. Are we close to making human ‘mind control’ a reality? With one tap on his space bar, Andrea Stocco fires the cannon on his computer game and blows a rocket out of the sky. 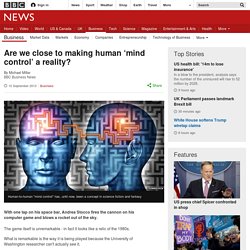 The game itself is unremarkable - in fact it looks like a relic of the 1980s. 25th JFK Assassination Secrets Scheduled for 2017 Release. Murdering Apollo: John F. Kennedy and the retreat from the lunar goal (part 2) By Dwayne A. 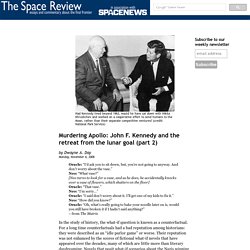 DayMonday, November 6, 2006 Oracle: “I’d ask you to sit down, but, you’re not going to anyway. And don’t worry about the vase.”Neo: “What vase?” [Neo turns to look for a vase, and as he does, he accidentally knocks over a vase of flowers, which shatters on the floor]Oracle: “That vase.”Neo: “I’m sorry…”Oracle: “I said don’t worry about it. I’ll get one of my kids to fix it.” In the study of history, the what-if question is known as a counterfactual. But even while counterfactual fiction grew in popularity, the practice of counterfactual history also gained credibility, and a theoretical foundation. Counterfactuals can be useful in determining if the conventional explanation of events is correct. As counterfactual theorists have pointed out, the actual practice of writing history requires the historian to make assumptions about causal events, and this inherently requires assuming that different choices and events would lead to different results. 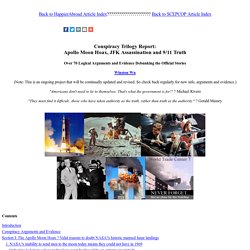 So check back regularly for new info, arguments and evidence.) "Americans don't need to lie to themselves. Flat Earth - Do you really believe the US went to the Moon.