Situation awareness. Situation awareness (SA) involves being aware of what is happening in the vicinity, in order to understand how information, events, and one's own actions will impact goals and objectives, both immediately and in the near future. 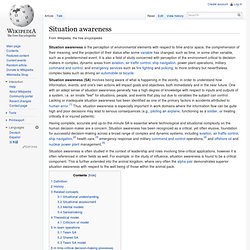 One with an adept sense of situation awareness generally has a high degree of knowledge with respect to inputs and outputs of a system, i.e. an innate "feel" for situations, people, and events that play out due to variables the subject can control. Lacking or inadequate situation awareness has been identified as one of the primary factors in accidents attributed to human error.[1] Thus, situation awareness is especially important in work domains where the information flow can be quite high and poor decisions may lead to serious consequences (e.g., piloting an airplane, functioning as a soldier, or treating critically ill or injured patients). OODA loop. Diagram of a decision cycle known as the Boyd cycle, or the OODA loop Overview[edit] The OODA loop has become an important concept in litigation,[1] business[2] and military strategy. 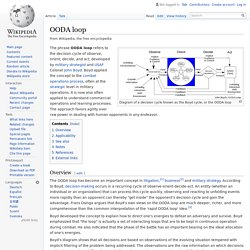 According to Boyd, decision-making occurs in a recurring cycle of observe-orient-decide-act. An entity (whether an individual or an organization) that can process this cycle quickly, observing and reacting to unfolding events more rapidly than an opponent can thereby "get inside" the opponent's decision cycle and gain the advantage. Frans Osinga argues that Boyd's own views on the OODA loop are much deeper, richer, and more comprehensive than the common interpretation of the 'rapid OODA loop' idea.[3] Boyd developed the concept to explain how to direct one's energies to defeat an adversary and survive. Boyd’s diagram shows that all decisions are based on observations of the evolving situation tempered with implicit filtering of the problem being addressed. Customer feedback management services. 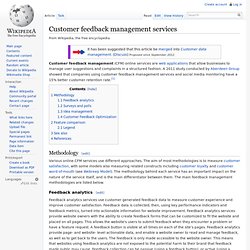 The methodology behind each service has an important impact on the nature of the service itself, and is the main differentiator between them. Control–feedback–abort loop. Too often systems fail, sometimes leading to significant loss of life, fortunes and confidence in the provider of a product or service. 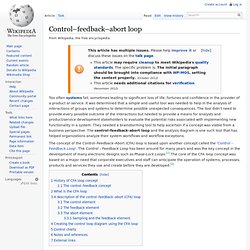 It was determined that a simple and useful tool was needed to help in the analysis of interactions of groups and systems to determine possible unexpected consequences. The tool didn’t need to provide every possible outcome of the interactions but needed to provide a means for analysts and product/service development stakeholders to evaluate the potential risks associated with implementing new functionality in a system. They needed a brainstorming tool to help ascertain if a concept was viable from a business perspective. The control–feedback–abort loop and the analysis diagram is one such tool that has helped organizations analyze their system workflows and workflow exceptions. The concept of the Control–Feedback–Abort (CFA) loop is based upon another concept called the ‘Control – Feedback Loop'. History of CFA loop concept[edit] In 1997, Mr. A. B. C. Control theory (sociology) Control Theory Diagram[1] Control Theory, as developed by Walter Reckless in 1973, states that behavior is caused not by outside stimuli, but by what a person wants most at any given time.

According to the control theory, weak containing social systems result in deviant behavior. Deviant behavior occurs when external controls on behavior are weak. According to control theory; people act rationally, but if someone was given the chance to act deviant they would. So, basically, if you have strong social bonds to positive influences, deviant behavior is less likely than someone who has no family or friends. Control theory stresses how weak bonds between the individuals and society free people to deviate or go against the norms, or the people who have weak ties would engage in crimes so they could benefit, or gain something that is to their own interest. Hirschi (1969) identifies four elements of social bonds: attachment, commitment, involvement, and belief.[2] Hamlin, John. O'Grady, William. PDCA. PDCA (plan–do–check–act or plan–do–check–adjust) is an iterative four-step management method used in business for the control and continuous improvement of processes and products. 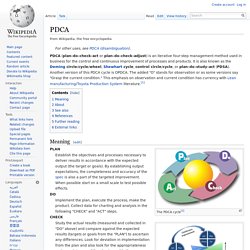 It is also known as the Deming circle/cycle/wheel, Shewhart cycle, control circle/cycle, or plan–do–study–act (PDSA). Another version of this PDCA cycle is OPDCA. The added "O" stands for observation or as some versions say "Grasp the current condition. " This emphasis on observation and current condition has currency with Lean manufacturing/Toyota Production System literature.[1]