The Not-So-Universal Language of Laughter. Exploredigital.eu sur Twitter : "The #shesaidso audience was encouraged to identify new #content opportunities - how's your #social #storytelling? Net-A-Porter launches the world's first shoppable social network. The Net Set app will allow users to shop and socialise with the stylish Net-A-Porter community BY Bibby Sowray | 06 May 2015 Alexandra Hoffnung, Natalie Massenet and Sarah Watson Taking its name from the exclusive 'Jet Set', the Net Set is Net-A-Porter.com'sb at creating its very own social network. 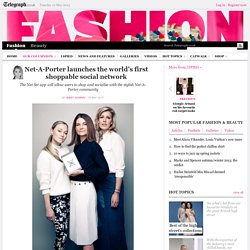 The app, which will launch initially on an invite-only basis on May 13, will allow users to share their style, their 'loves' and their inspirations and interact with fellow like-minded consumers, style leaders, designers and brands. Instagram photos and videos. Facebook at Work: Enterprise Social Networks. Efficiency and spending time on social networks may sound like two contradictory terms, but Facebook actually wants companies to believe its latest offering will be able to achieve this. 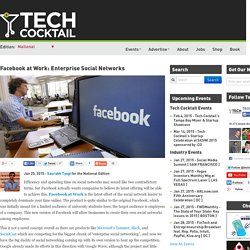 Facebook at Work is the latest effort of the social network leader to completely dominate your time online. The product is quite similar to the original Facebook, which was initially meant for a limited audience of university students-here, the target audience is employees of a company. This new version of Facebook will allow businesses to create their own social networks among employees. This is not a novel concept overall as there are products like Microsoft’s Yammer, Slack, and SocialCast which are competing for the biggest chunk of “enterprise social networking”, and now we have the big daddy of social networking coming up with its own version to heat up the competition. Google already made its efforts in this direction with Google Wave, although the project met little success. Winners & Losers Episode 10. Growing Conscious Entrepreneurs. “Change always comes bearing gifts.” – Price Pritchett As I explained in a previous post, I’m making an evolution in my work so I’d like to elaborate on my convictions. 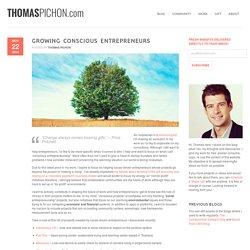 Although I still want to help entrepreneurs, I’d like to be more specific when it comes to who I help and want to focus on what I call “conscious entrepreneurship”. More often than not I used to give a hand to startup founders who tackle problems I now consider irrelevant concerning the alarming situation our world is facing nowadays. Due to this latest pivot in my work, I aspire to focus on helping cause-driven entrepreneurs whose projects go beyond the pursuit of “making a living”. Social Network Icon Pack.

No frilly styles, gradients or lighting effects — just the basics.

This set of social media icons is optimized at 32 and 64 pixels in five different shapes (over 1100 icons). All files are semi-transparent bitmap PNGs. Included in the download are these variants: CircleRounded SquareSquareSymbol (just the logo) Monochrome Simple & Styleable I kept them simple intentionally, but with a little know-how and a sprinkling of pixie dust, you can pull off some pretty sweet styles, like these: 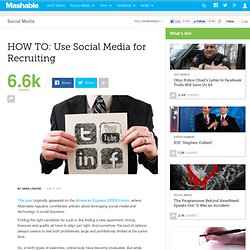 Finding the right candidate for a job is like finding a new apartment: timing, finances and quality all have to align just right. And somehow, the pool of options always seems to feel both prohibitively large and prohibitively limited at the same time. So, in both types of searches, online tools have become invaluable. But while tweeting out a call for a good real estate agent is fairly straightforward, using social media for recruiting has nuances that, if overlooked, can render the process far less useful. Here are a few key pointers from experts in the field to remember when getting started. 1. Simply tweeting out a link to a job posting might get you some viable candidates, but to really make sure you’re reaching your target audience, it’s important to cultivate your personality as an employer early on. 2. 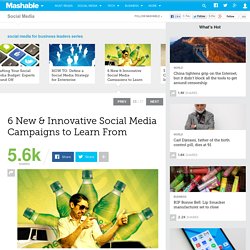 This week we scoured the web and our Twitter feeds to find some of the most interesting campaigns out there. From utilizing online video in an inventive way to creating a unique presence on Facebook, these six social media campaigns are some of the most original pieces of work as of late. Let us know about your favorite recent social media campaigns in the comments below. 1. Intel: Targeting a Digitally Savvy Audience Ad agency Amsterdam Worldwide unveiled the first in a series of blogger films, called “Visual Life,” for technology brand Intel back in January 2011. The first video of the series documented the work of fashion blogger and photographer Scott Schumann, The Sartorialist. The video went viral when it was embedded on The Sartorialist blog, but also gained a lot of views from Facebook, The Cool Hunter and mobile devices. 2. 3. 4. 5 Content Marketing Strategies for Small Business. This post originally appeared on the American Express OPEN Forum, where Mashable regularly contributes articles about leveraging social media and technology in small business.

One of the most effective, lowest-cost ways to drive traffic and build awareness for your business is through content marketing: creating and distributing relevant content to attract, acquire, and engage your target audience. Content marketing can run the gamut from publishing status updates and photos on Facebook Pages and Twitter, to writing compelling blog posts and posting videos on YouTube. Popular types of content you can start with include how-to articles and videos, Q&As, behind-the-scenes looks at your business, photos and videos showcasing your work and first-hand accounts of your staff participating in local or industry events. While many businesses have already tried a hand at content marketing, not all have been successful at getting their content found, consumed and shared. 1. 2. 3. 4. 5. CHOW - Recipes, cooking tips, resources, and stories for people who love food. 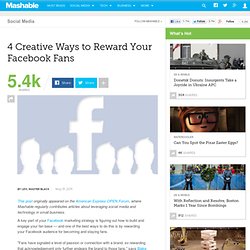 A key part of your Facebook marketing strategy is figuring out how to build and engage your fan base — and one of the best ways to do this is by rewarding your Facebook audience for becoming and staying fans. Social video advertising, viral marketing & branded content distribution. Twitter ads don't deliver: reports. The Real Cost Of Social Media  What’s the real cost of social media? 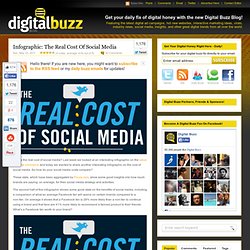 Last week we looked at an interesting infographic on the value of social commerce and today we wanted to share another interesting infographic on the cost of social media. So how do your social media costs compare? These stats, which have been aggregated by Focus.com, show some good insights into how much brands are paying, on average, for their social media strategy and activities. The second half of this infographic shows some good stats on the benefits of social media, including a comparison of what an average Facebook fan will spend on certain brands compared to a non-fan. 101 examples of f-commerce. I’ve previously ranted a bit about how Facebook is driving forward a large element of social commerce, but I’ve always found that it helps to provide evidence for any argument. 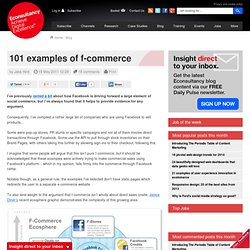 Consequently, I’ve compiled a rather large list of companies who are using Facebook to sell products... Some were pop-up stores, PR stunts or specific campaigns and not all of them involve direct transactions through Facebook. What The Trend: Week In Review. Social Media Monitoring and Analysis Made Easy. Twitter hash tag search ban?