How To Rid the World of Rabies. Most dog owners have no doubt heard about the horrors of rabies, an infection that’s usually transmitted through dog bites. 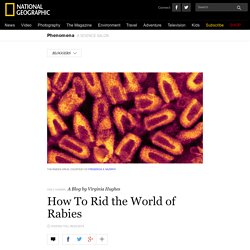 The bullet-shaped virus begins replicating, quietly, in a dog’s muscle. Then it travels to motor neurons in the central nervous system, and eventually reaches the brain. It wreaks inflammatory havoc there, leading the dog to become confused and extremely aggressive. Rabies. Rabies (/ˈreɪbiːz/; from Latin: rabies, "madness") is a viral disease that causes acute inflammation of the brain in humans and other warm-blooded animals.[1] The time period between contracting the disease and the start of symptoms is usually one to three months; however it can vary from less than one week to more than one year.[1] The time is dependent on the distance the virus must travel to reach the central nervous system.[2] Early symptoms may include fever and tingling at the site of exposure.[1] This is then followed by either violent movements, uncontrolled excitement, and fear of water or an inability to move parts of the body and confusion followed by loss of consciousness.[1] In both cases once symptoms appear it nearly always results in death.[1] Signs and symptoms[edit] Person with rabies, 1959 The period between infection and the first flu-like symptoms is typically 2 to 12 weeks. 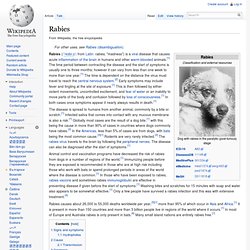 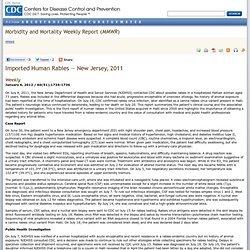 Rabies was included in the differential diagnosis because she had acute, progressive encephalitis of unknown etiology. No history of animal exposure had been reported at the time of hospitalization. On July 18, CDC confirmed rabies virus infection, later identified as a canine rabies virus variant present in Haiti. The patient's neurologic status continued to deteriorate, leading to her death on July 20. Case Report On June 30, the patient went to a New Jersey emergency department (ED) with right shoulder pain, chest pain, headaches, and increased blood pressure (157/100 mm Hg) despite hypertension medication. 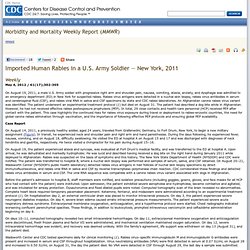 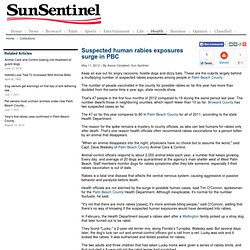 These are the culprits largely behind a multiplying number of suspected rabies exposures among people in Palm Beach County. The number of people vaccinated in the county for possible rabies so far this year has more than doubled from the same time a year ago, state records show. That's 47 people in the first four months of 2012 compared to 19 during the same period last year. The number dwarfs those in neighboring counties, which report fewer than 10 so far.

The 47 so far this year compares to 80 in Palm Beach County for all of 2011, according to the state Health Department. The reason for the spike remains a mystery to county officials, as labs can test humans for rabies only after death. "When an animal disappears into the night, physicians have no choice but to assume the worst," said Capt. They found "Lucky," a 2-year-old terrier-mix, along Florida's Turnpike, Walesky said. HPA Launches Rabies E Learning Module for Health Care Workers. 22 June 2012 A new online training module for public health professionals and healthcare workers dealing with patients who may have been exposed to rabies has been launched today by the Health Protection Agency (HPA). 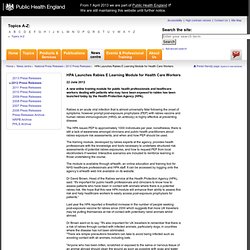 Rabies is an acute viral infection that is almost universally fatal following the onset of symptoms, however prompt post-exposure prophylaxis (PEP) with rabies vaccine and human rabies immunoglobulin (HRIG, an antibody) is highly effective at preventing disease. The HPA issues PEP to approximately 1000 individuals per year, nonetheless, there is still a lack of awareness amongst clinicians and public health practitioners about rabies exposure risk assessments, and when and how PEP should be used. Rabies surveillance in Poland (1992-2006). [Dev Biol (Basel). 2008. Can Rabies Be Eradicated? Titre du document / Document title Auteur(s) / Author(s) Affiliation(s) du ou des auteurs / Author(s) Affiliation(s) 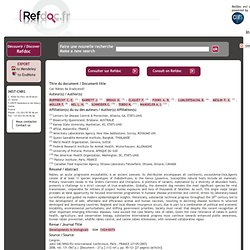 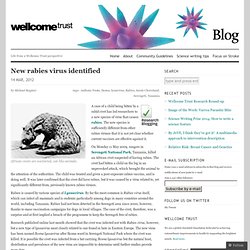 A case of a child being bitten by a rabid civet has led researchers to a new species of virus that causes rabies. The new species is sufficiently different from other rabies viruses that it is not yet clear whether current vaccines are effective against it. On Monday 11 May 2009, rangers in Serengeti National Park, Tanzania, killed an African civet suspected of having rabies. The civet had bitten a child on the leg in an unprovoked attack, which brought the animal to the attention of the authorities. 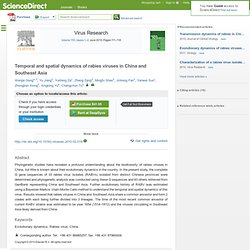 In the present study, the complete G gene sequences of 33 rabies virus isolates (RABVs) isolated from distinct Chinese provinces were determined and phylogenetic analysis was conducted using these G sequences and 93 others retrieved from GenBank representing China and Southeast Asia. Further evolutionary history of RABV was estimated using a Bayesian Markov chain Monte Carlo method to understand the temporal and spatial dynamics of this virus. Results showed that rabies viruses in China and Southeast Asia share a common ancestor and form 2 clades with each being further divided into 3 lineages. The time of the most recent common ancestor of current RABV strains was estimated to be year 1654 (1514–1812) and the viruses circulating in Southeast Asia likely derived from China. Keywords. Culling bats does not halt rabies, says report. 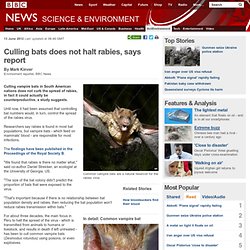 Phylogenetic Analysis of the Rabies Virus N-coding Region in Lithuanian Rabies Isolates. Acta Vet. Brno 2009, 78: 273-280 doi:10.2754/avb200978020273 Dainius Zienius1, Kristina Sajute2, Henrikas Zilinskas2, Arunas Stankevicius2. WEST GERMANS REPEL RABIES INVASION FROM EAST. TUBINGEN, West Germany— Since 1950, slinking westward at a rate of 30 miles a year, foxes have been spreading a rabies epidemic from Poland and East Germany into Western Europe. Rabies is as much of a menace in the East as it is in the West. Yet a cartographic rendering of the incidence of rabies looks very much like a battlefield map of Europe, with rabid foxes clustered in the woodsy central front of Poland, East Germany, Czechoslovakia, West Germany and eastern France.

The migrating fox population is so dense that in 1980 the Communist masters of the concrete-and-metal wall that snakes along the German frontier installed tiny wooden doors at regular intervals permitting the bushy-tailed travelers to slip into West Germany. Historical Perspective of Rabies in Europe and the Mediterranean Basin.