GM mosquito could help slash dengue vectors. [LIMA] The release of genetically modified (GM) mosquitoes could help reduce the numbers of dengue-transmitting wild mosquitoes, although it is unlikely to eliminate them entirely, according to a study. 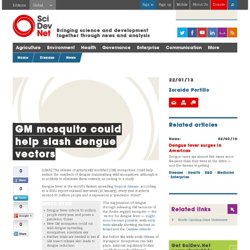 Dengue fever is the world's fastest spreading tropical disease, according to a WHO report released last week (16 January): every year it infects around 50 million people and it represents a "pandemic threat". New discovery on how the body fights dengue fever. Public release date: 12-Dec-2011 [ Print | E-mail Share ] [ Close Window ] Contact: Jim Sliwajsliwa@asmusa.org 202-942-9297American Society for Microbiology Worldwide, dengue fever strikes roughly 50 million people every year and takes the lives of thousands, but specific therapies or a vaccine for this mosquito-borne illness remain unavailable. 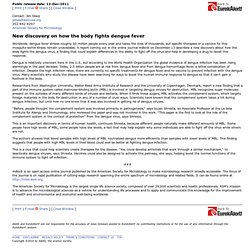 A report coming out in the online journal mBio® on December 13 describes a new discovery about how the body fights the dengue virus, a finding that could explain differences in the ability to fight off the virus and help in developing a drug to boost this response. Dengue is relatively unknown here in the U.S., but according to the World Health Organization the global incidence of dengue infection has been rising alarmingly in the past decades. This is an important discovery in terms of human health, continues Shresta, because different people naturally make different amounts of MBL. New model accurately predicts who will develop deadly form of dengue fever. Public release date: 16-Feb-2012 [ Print | E-mail Share ] [ Close Window ] Contact: Olivia Goodmanolivia.goodman@gabbe.com University of Texas Medical Branch at Galveston Researchers at the University of Texas Medical Branch have developed the first accurate predictive model to differentiate between dengue fever (DF) and its more severe form, dengue hemorrhagic fever (DHF). 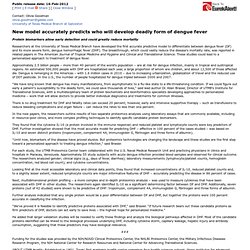 The breakthrough, which could vastly reduce the disease's mortality rate, was reported in related papers in The American Journal of Tropical Medicine and Hygiene and Clinical and Translational Science. These studies could lead to a personalized approach to treatment of dengue fever. Approximately 2.5 billion people – more than 40 percent of the world's population – are at risk for dengue infection, mainly in tropical and subtropical regions.

"We have long known that dengue has many manifestations, from asymptomatic to a flu-like state to a life-threatening condition. Study details how dengue infection hits harder the second time around. Public release date: 21-Dec-2011 [ Print | E-mail Share ] [ Close Window ] Contact: Sarah Yangscyang@berkeley.edu 510-643-7741University of California - Berkeley One of the most vexing challenges in the battle against dengue virus, a mosquito-borne virus responsible for 50-100 million infections every year, is that getting infected once can put people at greater risk for a more severe infection down the road. 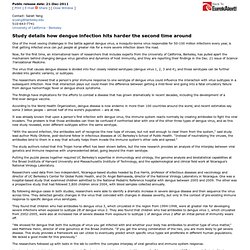 Now, for the first time, an international team of researchers that includes experts from the University of California, Berkeley, has pulled apart the mechanism behind changing dengue virus genetics and dynamics of host immunity, and they are reporting their findings in the Dec. 21 issue of Science Translational Medicine. The virus that causes dengue disease is divided into four closely related serotypes (dengue virus 1, 2, 3 and 4), and those serotypes can be further divided into genetic variants, or subtypes. Harris understands this risk on a personal level. Research Points to Developments in Dengue Prevention and Treatment. Dengue infection is a leading cause of illness and death in the tropics and subtropics. 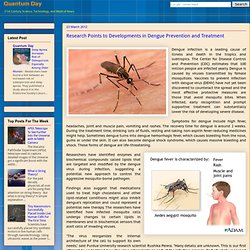 The Center for Disease Control and Prevention (CDC) estimates that 100 million people are infected yearly. Dengue is caused by viruses transmitted by female mosquitoes. Vaccines to prevent infection with dengue virus (DENV) have not yet been discovered to counteract the spread and the most effective protective measures are those that avoid mosquito bites. When infected, early recognition and prompt supportive treatment can substantially lower the risk of developing severe disease. Symptoms for dengue include high fever, headaches, joint and muscle pain, vomiting and rashes.

Researchers have identified enzymes and biochemical compounds called lipids that are targeted and modified by the dengue virus during infection, suggesting a potential new approach to control the aggressive mosquito-borne pathogen. Scientists to breed GM mosquitoes to stop spread of dengue fever. Japan tackles first dengue fever outbreak in 70 years. A Scientist's 20-Year Quest To Defeat Dengue Fever. Hide captionScott O'Neill wants to rid the world of dengue fever by infecting mosquitoes with bacteria so they can't carry the virus that causes the disease. 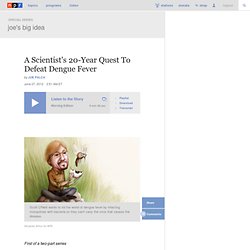 Benjamin Arthur for NPR First of a two-part series This summer, my big idea is to explore the big ideas of science. Instead of just reporting science as results — the stuff that's published in scientific journals and covered as news — I want to take you inside the world of science. I hope I'll make it easier to understand how science works, and just how cool the process of discovery and innovation really is. A lot of science involves failure, but there are also the brilliant successes, successes that can lead to new inventions, new tools, new drugs — things that can change the world That got me thinking that I wanted to dive deeper into the story of an Australian scientist named Scott O'Neill.

Dengue is a terrible disease. Colyn Huber But last summer, when I read about O'Neill's work, it really knocked me out. The stakes are high.