An Introduction to psychology

"psychology is common sense made difficult", said our psychology professor. In a a sense, he is right; sometimes psychology IS indeed common sense. On the other hand, sense would suggest.

Formally defined, psychology can be called the scientific study of behavioural and mental processes. Parenting Children with Positive Reinforcement (Examples + Charts) Children don’t come with instructions and discipline is often experienced by parents and children alike as an arena where our will and wits are tested.

Not many people “like” punishment, right? The disconnect in understanding this concept comes from the usage of the word “positive;” here at PositivePsychology.com, we generally use the term “positive” to refer to things that are inherently good, things that are life-giving, and things that promote thriving and flourishing. Parents, Kids, and Discipline. How can you provide discipline to your child so that they can function well at home and in public? 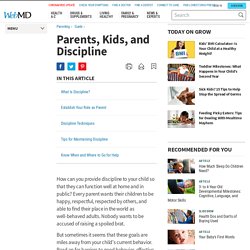 Every parent wants their children to be happy, respectful, respected by others, and able to find their place in the world as well-behaved adults. Nobody wants to be accused of raising a spoiled brat. But sometimes it seems that these goals are miles away from your child's current behavior. Skinner's 'reinforcement' and 'conditioning' theories lecture. Introduction This chapter introduces the broad theory of Behaviourism, explaining where it comes from and what it means in terms of ideas and methods. 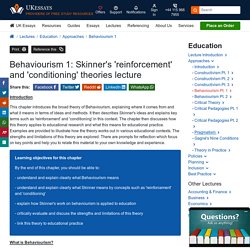 It then describes Skinner's ideas and explains key terms such as 'reinforcement' and 'conditioning' in this context. The chapter then discusses how this theory applies to educational research and what this means for educational practice. Examples are provided to illustrate how the theory works out in various educational contexts. The strengths and limitations of this theory are explored. Learning objectives for this chapter. 7 Types of Parental Abuse - Psych Central. A bruise should not be the requirement for evidence of parental abuse. 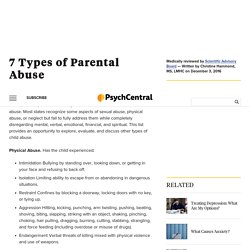 There are many other ways a child can be harmed. While this list may not be all inclusive, it is meant to expand on the traditional definition of child abuse. Behavior Modification to Help Your Child. Behavior modification is defined as "the alteration of behavioral patterns through the use of such learning techniques as biofeedback and positive or negative reinforcement. 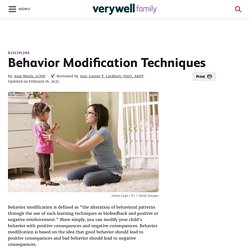 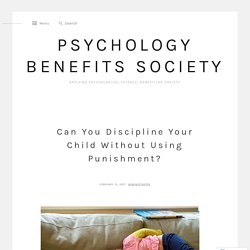 In this series we will explore the reasons that parents choose among discipline approaches, the science behind those techniques, and alternative approaches to discipline. By Alan E. Kazdin, PhD, ABPP (Yale University) When we talk about discipline, we usually refer to the efforts by parents and teachers to reduce or eliminate annoying or inappropriate child behaviors. Punishment is designed to suppress or reduce behavior and may appear like the perfect match for these goals. From the standpoint of psychological science, there is another way to consider the topic of discipline that sidesteps a sole focus on punishment.

Punishment in Brief As a general rule, punishment is not a very effective way of changing behavior, at least in the usual way it is administered. There are three major concerns relevant to the use of punishment. 1. 2. 3. So, How to Eliminate Behavior without Punishment 1. 2. 3. Parenting. Process of raising a child Parenting or child rearing is the process of promoting and supporting the physical, emotional, social, and intellectual development of a child from infancy to adulthood. 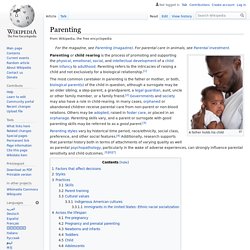 Parenting refers to the intricacies of raising a child and not exclusively for a biological relationship.[1] The most common caretaker in parenting is the father or mother, or both, biological parent(s) of the child in question, although a surrogate may be an older sibling, a step-parent, a grandparent, a legal guardian, aunt, uncle or other family member, or a family friend.[2] Governments and society may also have a role in child-rearing. In many cases, orphaned or abandoned children receive parental care from non-parent or non-blood relations. Positive reinforcement is the one parenting trick everybody needs to know. At the start of the school year, Lonnie Starling was struggling with her eight-year-old son’s behaviour. 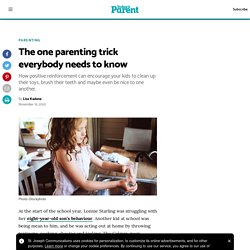 Another kid at school was being mean to him, and he was acting out at home by throwing tantrums, pushing, shoving and kicking. The Calgary mom remembered that using positive reinforcement—that is, focusing on the positive things he was doing, rather than constantly correcting his behaviour—had been effective to influence his actions when he was a toddler, so she got into the habit of praising him again. “When he does something good, we kind of go overboard. We make a huge deal of it—if he’s helpful with things around the house, when he shovels the walk,” explains Starling. “His sister was upset and he brought her a stuffie.