Blasphemy Day. Blasphemy Rights Day International encourages individuals and groups to openly express their criticism of, or even disdain for, religion. 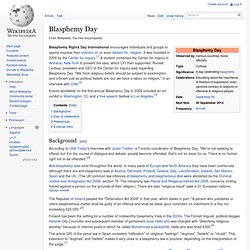 It was founded in 2009 by the Center for Inquiry.[1] A student contacted the Center for Inquiry in Amherst, New York to present the idea, which CFI then supported. Ronald Lindsay, president and CEO of the Center for Inquiry said regarding Blasphemy Day, "We think religious beliefs should be subject to examination and criticism just as political beliefs are, but we have a taboo on religion," in an interview with CNN.[2] Events worldwide on the first annual Blasphemy Day in 2009 included an art exhibit in Washington, DC and a free speech festival in Los Angeles.[3] Background[edit] According to USA Today's interview with Justin Trottier, a Toronto coordinator of Blasphemy Day, "We're not seeking to offend, but if in the course of dialogue and debate, people become offended, that's not an issue for us.

Anti-blasphemy laws exist throughout the world. Boobquake. Boobquake was a rally which took place on April 26, 2010. 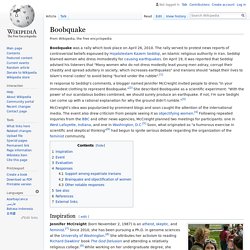 The rally served to protest news reports of controversial beliefs espoused by Hojatoleslam Kazem Seddiqi, an Islamic religious authority in Iran. Seddiqi blamed women who dress immodestly for causing earthquakes. On April 19, it was reported that Seddiqi advised his listeners that "Many women who do not dress modestly lead young men astray, corrupt their chastity and spread adultery in society, which increases earthquakes" and Iranians should "adapt their lives to Islam's moral codes" to avoid being "buried under the rubble".[1] In response to Seddiqi's comments, a blogger named Jennifer McCreight invited people to dress "in your immodest clothing to represent Boobquake. 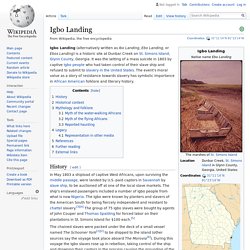 Simons Island, Glynn County, Georgia. It was the setting of a mass suicide in 1803 by captive Igbo people who had taken control of their slave ship and refused to submit to slavery in the United States. The event's moral value as a story of resistance towards slavery has symbolic importance in African American folklore and literary history. History[edit] Igbo women, photographed in Nigeria, early 20th century In May 1803 a shipload of captive West Africans, upon surviving the middle passage, were landed by U.S. The chained slaves were packed under the deck of a small vessel named The Schooner York[1][2] to be shipped to the island (other sources say the voyage took place aboard The Morovia[6]).

The following sequence of events is unclear, as there are several versions concerning the revolt's development, some of which are considered mythological. Ray Conniff: Concert at the White House (1972) Yip-In Turns Into Bloody Mess as Police Riot at Grand Central. Clip Job: an excerpt every day from the Voice archives.March 28, 1968, Vol. 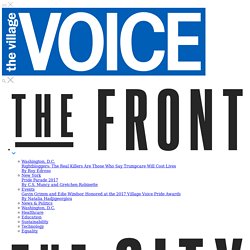 XIII, No. 24 The Grand Central Riot: Yippies Meet the Man by Don McNeill All the brass was watching Chief Inspector Sanford Garelik, shielded by a cluster of Tactical Patrol Force heavies, leaned against the wall in the 42nd Street entrance to Grand Central Station, intently watching the churning sea of demonstrators. Sid Davidoff and Barry Gottehrer, Lindsay’s roving sensory apparatus, roamed around the terminal for hours. And a dozen privileged persons of some sort lined the balcony above the escalators leading to the Pan Am Building, observing the melee below like Romans digging the arena. All the brass was watching, and the cops were having a ball. “The police reacted enthusiastically to the prospect of being unleashed.” It was a Yip-In. [Rest of story and several pages from issue missing.] Scenes by Howard Smith I WAS A WITNESS to the entire Grand Central Riot.

Did the police expect a crowd that large?