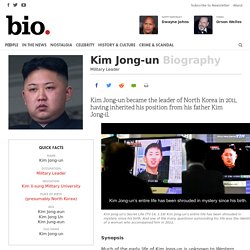 Synopsis Much of the early life of Kim Jong-un is unknown to Western media. Presumably born in North Korea, Kim Jong-un is the son of Ko Young-hee, an opera singer, and Kim Jong-il, who was the military-oriented leader of the country for over a decade until his death in 2011. Kim Jong-un has continued the country’s nuclear testing and what is believed to be the development of missile technology despite international disapproval.

He has pledged to focus on educational and economic reforms and is more mediagenic in his approach to leadership than his father. Limited Information on Early Life The birthdate and early childhood of North Korean leader Kim Jong-un is shrouded in mystery. Osama bin Laden. Osama bin Laden is a terrorist extremist who planned the attacks on the World Trade Center and is intent on driving Western influence from the Muslim world. 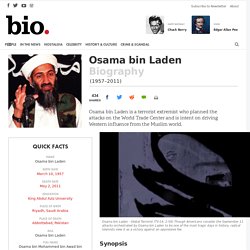 Synopsis Osama bin Laden was born in Riyadh, Saudi Arabia, in 1957. When the Soviet Union invaded Afghanistan in 1979, bin Laden joined the Afghan resistance. After the Soviet withdrawal, bin Laden formed the al-Qaeda network which carried out global strikes against Western interests, culminating in the September 11, 2001, attacks on the World Trade Center and the Pentagon. Osama bin Laden. In an attempt to protect himself from arrest and win even more recruits to al-Qaida’s deadly cause, bin Laden moved from Sudan to Afghanistan in 1996. 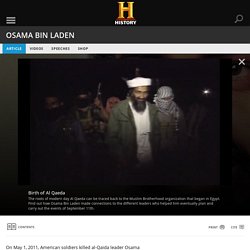 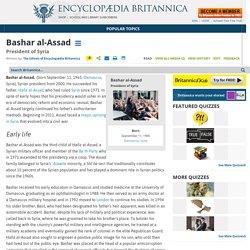 He succeeded his father, Ḥafiz al-Assad, who had ruled Syria since 1971. In spite of early hopes that his presidency would usher in an era of democratic reform and economic revival, Bashar al-Assad largely continued his father’s authoritarian methods. Beginning in 2011, Assad faced a major uprising in Syria that evolved into a civil war. Early life Bashar al-Assad was the third child of Ḥafiz al-Assad, a Syrian military officer and member of the Baʿth Party who in 1971 ascended to the presidency via a coup. Bashar received his early education in Damascus and studied medicine at the University of Damascus, graduating as an ophthalmologist in 1988. Presidency. Bashar al-Assad - President (non-U.S.) - Biography.com. As the successor to his father, Hafez, Bashar al-Assad has continued with his father's brutal rule of Syria. 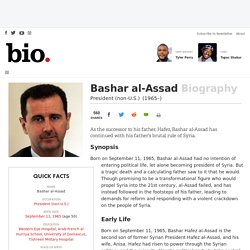 Synopsis Born on September 11, 1965, Bashar al-Assad had no intention of entering political life, let alone becoming president of Syria. But a tragic death and a calculating father saw to it that he would. Though promising to be a transformational figure who would propel Syria into the 21st century, al-Assad failed, and has instead followed in the footsteps of his father, leading to demands for reform and responding with a violent crackdown on the people of Syria. Slobodan Milosevic - President (non-U.S.) - Biography.com. Slobodan Milosevic was a politician best known as the Serbian and Yugoslavian president in the late 1980s through the '90s. 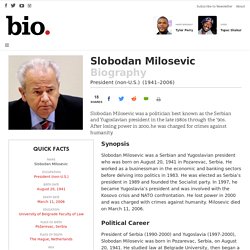 After losing power in 2000, he was charged for crimes against humanity. Synopsis. President of Yugoslavia. Slobodan Milošević, (born Aug. 29, 1941, Požarevac, Yugos. 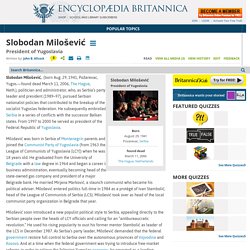 —found dead March 11, 2006, The Hague, Neth.), politician and administrator, who, as Serbia’s party leader and president (1989–97), pursued Serbian nationalist policies that contributed to the breakup of the socialist Yugoslav federation. He subsequently embroiled Serbia in a series of conflicts with the successor Balkan states. From 1997 to 2000 he served as president of the Federal Republic of Yugoslavia. Milošević was born in Serbia of Montenegrin parents and joined the Communist Party of Yugoslavia (from 1963 the League of Communists of Yugoslavia [LCY]) when he was 18 years old. He graduated from the University of Belgrade with a law degree in 1964 and began a career in business administration, eventually becoming head of the state-owned gas company and president of a major Belgrade bank. John B. North Korean political leader. Alternative title: Kim Chong Il Kim Jong IlAFP/Getty Images. 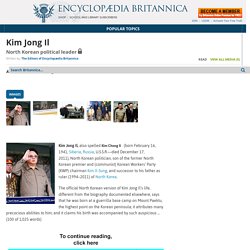 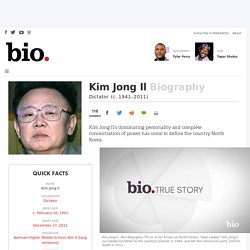 Synopsis Born in either 1941 or 1942, much of Kim Jong Il's persona is based on a cult of personality, meaning that legend and official North Korean government accounts describe his life, character, and actions in ways that promote and legitimize his leadership, including his birth. Over the years, Kim's dominating personality and complete concentration of power has come to define the country North Korea. Early Life. 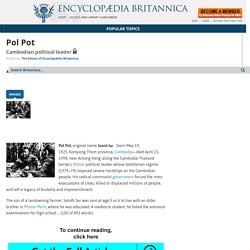 His radical communist government forced the mass evacuations of cities, killed or displaced millions of people, and left a legacy of brutality and impoverishment. The son of a landowning farmer, Saloth Sar was sent at age 5 or 6 to live with an older brother in Phnom Penh, where he was educated. A mediocre student, he failed the entrance examinations for high school ... (100 of 492 words)

Chile: 1973 coupStock footage courtesy The WPA Film LibraryPinochet, a graduate of the military academy in Santiago (1936), was a career military officer who was appointed army commander in chief by President Allende 18 days before the coup, which he planned and led. Pinochet was named head of the victorious junta’s governing council, and he moved to crush Chile’s liberal opposition; in its first three years, the regime arrested approximately 130,000 people, many of whom were tortured. In June 1974 Pinochet assumed sole power as president, relegating the rest of the junta to an advisory role. Augusto Pinochet - Dictator, General - Biography.com.

Chilean dictator Augusto Pinochet overthrew the Allende government in 1973 and stayed in power until 1998. He was never tried for alleged human rights abuses. Synopsis Augusto Pinochet Ugarte (born November 25, 1915) joined the Chilean army in 1935. He rose through the ranks and was appointed Commander in Chief by President Salvador Allende in 1973. A month later, Pinochet led the military coup that overthrew Allende.

Profile. Genghis Khan. Alternative titles: Ching-gis Khan; Chinggiss Khan; Chingis Khan; Jenghiz Khan; Jinghis Khan; Temuchin; Temüjin Genghis KhanThe Bridgeman Art Library/Getty Images Genghis Khan, Genghis also spelled Chinggis, Chingis, Jenghiz, or Jinghis, original name Temüjin, also spelled Temuchin (born 1162, near Lake Baikal, Mongolia—died August 18, 1227), Mongolian warrior-ruler, one of the most famous conquerors of history, who consolidated tribes into a unified Mongolia and then extended his empire across Asia to the Adriatic Sea. Genghis Khan was a warrior and ruler of genius who, starting from obscure and insignificant beginnings, brought all the nomadic tribes of Mongolia under the rule of himself and his family in a rigidly disciplined military state.

Genghis Khan Biography. Mongolian warrior and ruler Genghis Khan created the largest empire in the world, the Mongol Empire, by destroying individual tribes in Northeast Asia. Synopsis Genghis Khan was born "Temujin" in Mongolia around 1162. He married at age 16, but had many wives during his lifetime. At 20, he began building a large army with the intent to destroy individual tribes in Northeast Asia and unite them under his rule. He was successful; the Mongol Empire was the largest empire in the world before the British Empire, and lasted well after his own death in 1227.

Maximilien de Robespierre was an official during the French Revolution and one of the principal architects of the Reign of Terror. Synopsis. Joseph Stalin - Biography - Dictator. Joseph Stalin ruled the Soviet Union for more than two decades, instituting a reign of terror while modernizing Russia and helping to defeat Nazism. Synopsis. Biography - prime minister of Union of Soviet Socialist Republics. Adolf Hitler - Biography - Military Leader, Dictator. Adolf Hitler was the leader of Nazi Germany from 1934 to 1945. He initiated World War II and oversaw fascist policies that resulted in millions of deaths.