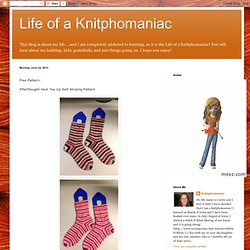 The book on knitting samples. Season 13 Doctor Who Scarf Knit Patterns in Various Yarns. The Season Thirteen Scarf was seen in: Terror of the Zygons, Planet of Evil, Pyramids of Mars, The Android Invasion, The Brain of Morbius, and The Seeds of Doom. 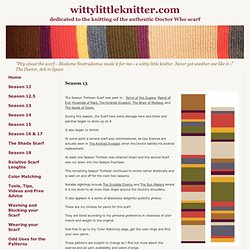 During this season, the Scarf took some damage here and there and patches began to show up on it. It also began to shrink. At some point a second scarf was commissioned, as two Scarves are actually seen in The Android Invasion when the Doctor battles his android replacement. At least one Season Thirteen was retained intact and the second Scarf was cut down into the Season Fourteen. This remaining Season Thirteen continued to shrink rather drastically and is seen on and off for the next two seasons. Notable sightings include The Invisible Enemy and The Sun Makers where it is too short to do more than drape around the Doctor’s shoulders. 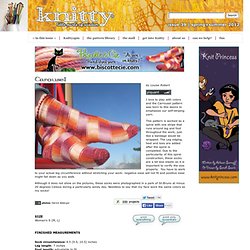 Continue in this manner until you have worked around the leg 3.5 times: you will be aligned with the first half of the spiral, 4 stripes below. Work even as set for 4.25[4.75, 5.25] inches. Right sock foot: Work attached rows again as per the leg: Row 1 [RS] Sl1, k10, sl1, pick up and knit 1 stitch from the right side of the cast-on edge and pass the slipped stitch over. Repeat Rows 1-4 until 3 sts rem. The Double-Stitch Short Row Heel – aka the “yo-yo” or “jo-jo” heel. So — a few weeks ago, I wrote about sock heels. 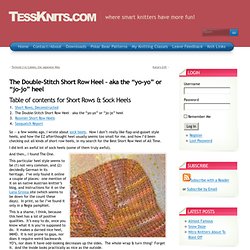 How I don’t really like flap-and-gusset style heels, and how the EZ afterthought heel usually seems too small for me, and how I’d been checking out all kinds of short row heels, in my search for the Best Short Row Heel of All Time. I did knit an awful lot of sock heels (some of them truly awful). And then… I found The One. This particular heel style seems to be (1) not very common, and (2) decidedly German in its heritage. I’ve only found it online a couple of places: one mention of it on an native Austrian knitter’s blog, and instructions for it on the Lana Grossa site (which seems to be down for the count these days). This is a shame, I think, because this heel has a lot of positive qualities.

And, it adds one more thing to EZ’s famous list of “things you can do wrong when you’re learning to knit that turn into a technique later on.” In fact, the only thing I don’t like about this heel is… the name.