Meryl McMaster – interview: ‘I explore complex questions around one’s sense of self and belonging to two heritages’ By ELIZABETH FULLERTON The Canadian Indigenous artist Meryl McMaster (b1988, Ottawa) creates dramatic photographs of herself in costume within sumptuous natural landscapes that evoke ancient civilisations and folkloric myths. 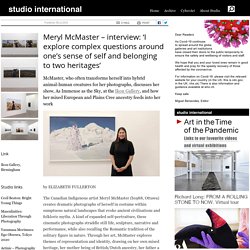 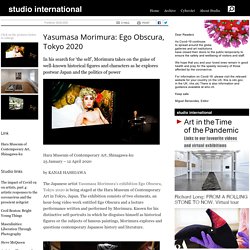 The exhibition consists of two elements, an hour-long video work entitled Ego Obscura and a lecture performance written and performed by Morimura. Known for his distinctive self-portraits in which he disguises himself as historical figures or the subjects of famous paintings, Morimura explores and questions contemporary Japanese history and literature. Yasumasa Morimura. Born in Osaka in 1951, during the postwar occupation of his country by the American allied forces, Morimura was educated with western values that ignored prewar Japanese sensibility. Yasumasa Morimura. “One other epoch-making scene for me was the meeting between Showa Emperor and General Douglas MacArthur at the general’s office after Japan has lost the second world war. 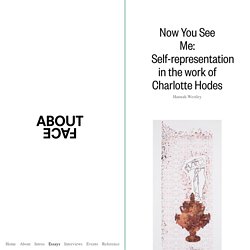 Contoured in white, black or pink; emerging from or blending into backgrounds of intricate pattern and vibrant colour; reclining, stretching or walking away, the female nude asserts her presence across painting, print, papercut, collage, glass and ceramic. A hybrid practice that combines traditional tools such as pencil or scalpel drawing with laser cutouts and digital transfers, the artist creates her images from a personal archive of visual elements. Hodes’ art states its contemporaneity through a constant engagement and negotiation with the past. Expressing Identity through Art — MirkaArt. There are other works on view by Jung Rang Bae, Sohyung Choi, and Young June Lew. 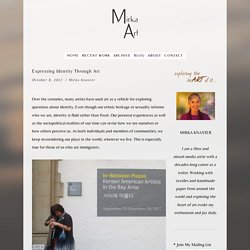 As the exhibit runs until December 10, I hope you'll have an opportunity to visit Mills College in Oakland, CA and see all of them. Independent Curator Linda Inson Choy and Consulting Curator Hyonjoeng Kim Han (Associate Curator of Korean Art, Asian Art Museum of San Francisco) have done a masterful job of hanging the thoroughly contemporary show with a sense of traditional East Asian aesthetics, whose concepts transcend time and place.

For example, because space is as important as form or content, each artist is given ample height and width for her/his work to breathe freely. I especially welcome the overall spaciousness after feeling overwhelmed by shows in the 19th-century French Salon mode, where it seems every square inch of wall space is covered and I don't know where to look. Being able to walk around and under the pieces with ease affords viewers a variety of perspectives. Cindy Sherman - Bio. “I am trying to make other people recognize something of themselves rather than me.” 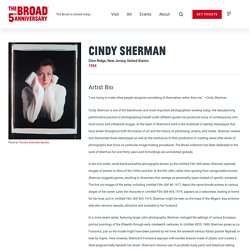 —Cindy Sherman Cindy Sherman is one of the best-known and most important photographers working today. Her decades-long performative practice of photographing herself under different guises has produced many of contemporary art’s most iconic and influential images. At the heart of Sherman’s work is the multitude of identity stereotypes that have arisen throughout both the history of art and the history of advertising, cinema, and media. Sherman reveals and dismantles these stereotypes as well as the mechanics of their production in creating series after series of photographs that focus on particular image-making procedures. Cindy Sherman Photography, Bio, Ideas. Summary of Cindy Sherman Cindy Sherman is a contemporary master of socially critical photography. 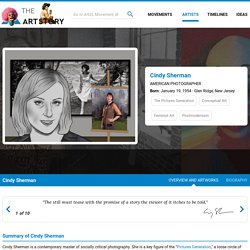 She is a key figure of the "Pictures Generation," a loose circle of American artists who came to artistic maturity and critical recognition during the early 1980s, a period notable for the rapid and widespread proliferation of mass media imagery. At first painting in a super-realist style in art school during the aftermath of American Feminism, Sherman turned to photography toward the end of the 1970s in order to explore a wide range of common female social roles, or personas. Sherman sought to call into question the seductive and often oppressive influence of mass-media over our individual and collective identities. Accomplishments. Cindy Sherman. For four decades, Cindy Sherman has probed the construction of identity, playing with the visual and cultural codes of art, celebrity, gender, and photography. 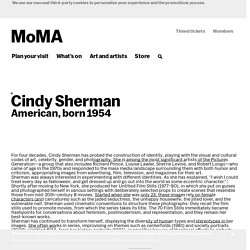 She is among the most significant artists of the Pictures Generation—a group that also includes Richard Prince, Louise Lawler, Sherrie Levine, and Robert Longo—who came of age in the 1970s and responded to the mass media landscape surrounding them with both humor and criticism, appropriating images from advertising, film, television, and magazines for their art. Sherman was always interested in experimenting with different identities. True Identity : The Postmodern Art Affair. April 10, 2016 Alias of Ksenija Pantelić. 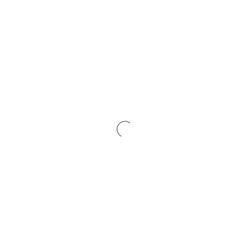 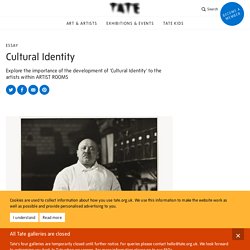 They construct a sense of who we are as individuals, as a society, or as a nation. They question stereotypes and conventions while exploring attributes such as gender, sexuality, race, nationality and heritage. Our culture is informed by various forms of artistic and social endeavour such as technology, politics, style, music, performance and the arts. ‘Cultural studies’ emerged in the late 1950s and has been informed by radical approaches such as Marxism, feminism and semiotics. The period of the Weimar Republic 1919–33 was a time of immense cultural revival in Germany. This lifelong attempt to document the German people resulted in Sander’s exhaustive portfolio People of the 20th Century which presented a diverse and democratic society. Yinka Shonibare ’s art as an expression of hybrid identity. Cultural Identity in Art: Interview with Artist Cathy Lu. San Francisco artist Cathy Lu applies traditional Chinese imagery to present modern themes of her trans-cultural identity This blog post is the first of a series that aims to explore and highlight Asian American culture in San Francisco and the Bay Area by reflecting upon themes related to our ongoing Asian American Now program series. 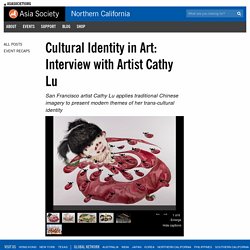 How artists explore identity. The singular art of the self-portrait. It was only in 2013 that the Oxford English Dictionary named “selfie” the Word of the Year, but given the way the word has come to exemplify contemporary culture, it’s already hard to remember our pre-selfie lives. The emergence of the selfie has, perhaps unsurprisingly, coincided with a surge of interest in the related but distinct genre of self-portraiture, which art historian James Hall calls “the defining visual genre of our confessional age.” Selfies and self-portraits both serve as mirrors of sorts for image makers. It was, after all, the emergent cultural fascination with the mirror toward the end of the 14th century and the potent symbolism it offered the artist that led to the flourishing of the self-portrait genre during the Renaissance.

The mirror, which fascinated and excited people more than 700 years ago, still holds our gaze today. What can self-portraits convey that selfies cannot? Bonus: using herself as a subject has allowed for enormous artistic freedom. An Interview With Artist AM DeBrincat. AM DeBrincat, Bear Share (detail), xerox transfer print, acrylic paint, oil paint on canvas | © AM DeBrincat Add travel ideas to a Plan and see them on a map Got it! Artist AM DeBrincat was born Alexandra Marie DeBrincat in San Francisco, California. PAINTINGS — MICHAELREEDER. Sephora Venites. London, London, United Kingdom About Sephora Venites. Hidden Identities by Stefan Gunnesch – Trendland Online Magazine Curating the Web since 2006. The artist Stefan Gunnesh describes his work as reinventing continuously, nothing lasts for an eternity which makes us conscious about being in the moment. He tells us that the collage technique presupposes that, at first something in its entirety has to be fragmented and thus destroyed before something new can emerge from it.

I sat down with Stefan to see if he can tell us more about the many layers that his work contains. What does it mean to you to be a visual storyteller? With my works, I try to connect to the audience’s feelings and memories. On a personal level, I want to tell a story via associations. What would you describe as your signature style? As soon as I started studying at the university, I developed a passion for working with ready-made pictures. Can you tell a little more about the process of developing your collages? Interview with Jennifer Mehigan.

Investigating Identity. Identity is the way we perceive and express ourselves. Factors and conditions that an individual is born with—such as ethnic heritage, sex, or one’s body—often play a role in defining one’s identity. However, many aspects of a person’s identity change throughout his or her life. People’s experiences can alter how they see themselves or are perceived by others. Conversely, their identities also influence the decisions they make: Individuals choose their friends, adopt certain fashions, and align themselves with political beliefs based on their identities. Perceptions of identity: IB Art.