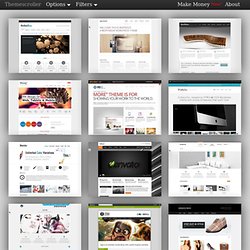 GuideGuide: Free Plugin For Dealing With Grids In Photoshop. Advertisement This article is the fourth in our new series that introduces the latest, useful and freely available tools and techniques, developed and released by active members of the Web design community. 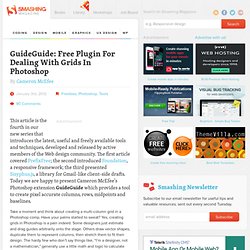 The first article covered PrefixFree; the second introduced Foundation, a responsive framework; the third presented Sisyphus.js, a library for Gmail-like client-side drafts. Today we are happy to present Cameron McEfee’s Photoshop extension GuideGuide which provides a tool to create pixel accurate columns, rows, midpoints and baselines. Take a moment and think about creating a multi-column grid in a Photoshop comp. Have your palms started to sweat? (siteWidth - (gutterWidth × (numberOfColumns - 1) ) ÷ numberOfColumns = columnWidth I was sitting at my desk one day doing this exact equation when I thought, “Man, this looks just like code. Enter: GuideGuide. Unleash Accordion Slider. WordPress Custom Post Type Generator. Free textures for your next web project.

The seigaiha or wave is a pattern of layered concentric circles creating arches, symbolic of waves or water and representing surges of good luck. 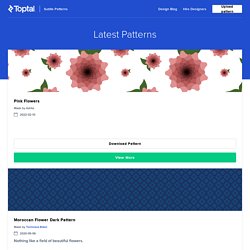 Made by Olga Libby Download A friend gave me a cork wallet. I scanned it and made this. Made by Atle Mo Download The Asanoha pattern is one of the most popular traditional patterns often seen on Japanese kimono. Made by Olga Libby Download Yes, the Japanese sure know a thing or two about patterns. Download Long overdue, I know. Made by Aslan Zamanloo. Download It’s not quite a new year yet, but soon! Made by Mustafa BAL. Download Colorful waves, with value apparently. Fontello - easy iconic fonts composer. Free Zocial Button Set: Social CSS3 Buttons. Advertisement The idea behind this project was to produce a consistent set of buttons that could be used for the range of social actions frequently taken in Web applications.

These actions are often important goals for users, such as connecting third-party accounts or sharing content to third-party platforms, so their appearance has to be attractive and clear. The standard buttons provided by third parties (such as Facebook, Twitter and SoundCloud) vary in size, style and interactivity. A consistent button set could reduce a lot of that visual noise and inconsistency. Furthermore, having it in CSS format means that changing the text for certain actions would be a breeze for developers, and it also allows administrators of non-English websites to translate labels into their native languages.

The button set was designed from the beginning to require no extra markup, and the elements used are entirely the choice of the (semantically considerate) designer. Download The Button Set For Free. 20 Awesome Resources for Twitter Bootstrap Lovers. Generators Bootstrap Custom Build Before diving into great third party Bootstrap resources, it’s worth pointing out a great little tool right from Twitter that allows you to completely customize an impressive range of Boostrap features so that you can create a custom build that’s perfect for your project. 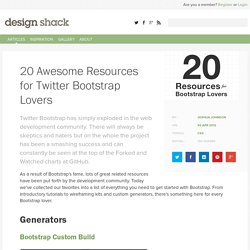 If you haven’t checked out Bootstrap in a while, you should give this a look because it’s new with Twitter Bootstrap 2.0. 15 great HTML5 and CSS3 generators. HTML5 and CSS3 are great languages to start off learning with, and I’ve always thought that one of the best ways to start learning is to just dive in and manipulate the code. 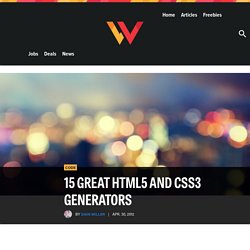 As you could probably tell, this is where generators step in. They are a great way to generate some code, play with it, and learn. Not only that, they are incredibly useful because often times as a developer or designer we find we are doing things over and over again. Well, generators can take off that edge and do those small things for you each time. As an example, I have a text-expander snippet that creates an HTML5 template that I wrote about here. I will say that most of this list is going to focus on CSS3 generators, simply because they are in demand more than HTML5 generators, and we will learn why.

CSS3 Generators There is a somewhat negative connotation when it comes to these generators, and I have to say that as a designer and developer there is nothing negative about using one. General Generators CSS3.me. Icons for Apps and Stuff - Glyphs - Icon Set. Twitter Bootstrap. The ‘tiny screen first’ responsive boilerplate. Best Slideshow (Content Slider) Plugins for WordPress. UPDATE Feb 2012: We’ve reviewed all the newest sliders for this year, you can now check out our review of best slideshow (content sliders) plugins for WordPress in 2012. 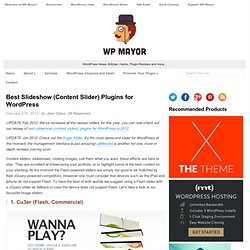 UPDATE Jan 2012: Check out the Sugar Slider, it’s the most awesome slider for WordPress at the moment, the management interface is just amazing! uBillboard is another hot one, more in depth reviews coming soon. Content sliders, slideshows, rotating images, call them what you want, these effects are here to stay. They are excellent at showcasing your portfolio, or to highlight some of the best content on your site/blog. At the moment the Flash-powered sliders are simply too good to be matched by their JQuery-powered competitors. 1. CU3ER is a 3D image slider that is easy to set up, fully customizable, tailored to provide a unique look and feel, inspiring, and fun to use. Gridpak - The Responsive grid generator.