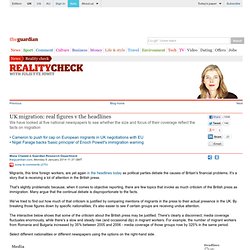 It's a story that is receiving a lot of attention in the British press. That's slightly problematic because, when it comes to objective reporting, there are few topics that invoke as much criticism of the British press as immigration. Many argue that the continual debate is disproportionate to the facts. We've tried to find out how much of that criticism is justified by comparing mentions of migrants in the press to their actual presence in the UK. By breaking those figures down by specific nationalities, it's also easier to see if certain groups are receiving undue attention.

The interactive below shows that some of the criticism about the British press may be justified. Select different nationalities or different newspapers using the options on the right-hand side. You can see all of our data in full here. La pauvreté aux USA en une map. Les données peuvent dire des mensonges. We live in an age of Big: Big Computers, Big Data, and Big Lies. 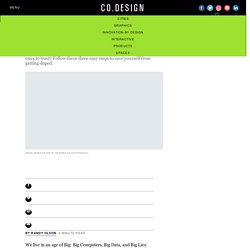 Faced with an unprecedented torrent of information, data scientists have turned to the visual arts to make sense of big data. The result of this unlikely marriage—often called "data visualizations" or "infographics"—has repeatedly provided us with new and insightful perspectives on the world around us. However, time and time again we have seen that data visualizations can easily be manipulated to lie. By misrepresenting, altering, or faking the data they visualize, data scientists can twist public opinion to their benefit and even profit at our expense. We have a natural tendency to trust images more than text. 1. The subtlest way a data visualization can fool you is by using visual cues to make data stand out that normally wouldn’t.

Color cues Color is one popular tool for making certain data stand out above the rest. Make sure to look at what the colors actually represent before drawing a conclusion from the visualization. Où sont tués les journalistes ? Syria 'remained the most deadly place for journalists on the job in 2013' according to a report by the Committee to Protect Journalists. 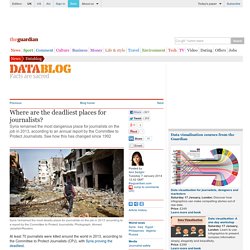 Photograph: Ahmed Jadallah/Reuters At least 70 journalists were killed around the world in 2013, according to the Committee to Protect Journalists (CPJ), with Syria proving the deadliest. The annual report states that "Syria remained the most deadly place for journalists on the job in 2013, while Iraq and Egypt each saw a spike in fatal violence". In total, the Middle East accounted for two thirds of journalist deaths with a motive confirmed, last year.

The deaths of another 25 journalists in 2013 are also being investigated by the CPJ to determine whether or not they were work-related. With 29 journalists killed in Syria last year, the number of reporters and broadcasters killed covering the conflict has reached a total of 63.

Outils. Animaux Transgéniques : jusqu'où peut-on aller. How people in Muslim countries prefer women to dress in public. UPDATE: Read our Q&A with the author of the Univ. of Michigan study for more information on survey methods and to see how responses differed by gender, age, education and religion. 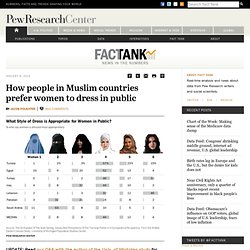 An important issue in the Muslim world is how women should dress in public. A recent survey from the University of Michigan’s Institute for Social Research conducted in seven Muslim-majority countries (Tunisia, Egypt, Iraq, Lebanon, Pakistan, Saudi Arabia and Turkey), finds that most people prefer that a woman completely cover her hair, but not necessarily her face. Only in Turkey and Lebanon do more than one-in-four think it is appropriate for a woman to not cover her head at all in public. The survey treated the question of women’s dress as a visual preference. Each respondent was given a card depicting six styles of women’s headdress and asked to choose the woman most appropriately outfitted for a public place. Topics: Gender, Religion and Society. Evolution des couleurs sur les affiches de cinéma. Carte : pourquoi la France intervient en Centrafrique.