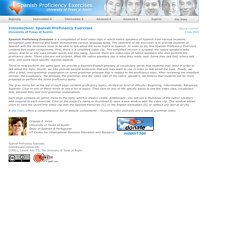 The objective of the exercises is to provide students of Spanish with the necessary tools to be able to talk about the same topics in Spanish. In order to do, this Spanish Proficiency Exercises contains five major components. First, there is a simplified video clip. This simplified version is scripted, the native speakers talks slower, and he or she uses simpler words and less slang.

Second, there are video clips of native speakers who also perform the proficiency tasks. Third, to help perform the same task, we provide a Spanish/English glossary of vocabulary words that students may need in order to talk about the topic. The gray menu bar at the top of each page contains proficiency topics, divided by level of dificulty: Beginning, Intermediate, Advanced, Superior. Chill Pill: Things I've decided to relax about as a language teacher. This year has been a year of growth, without a doubt. 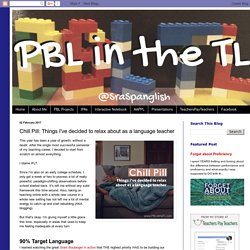 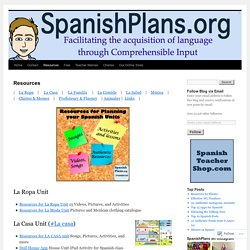 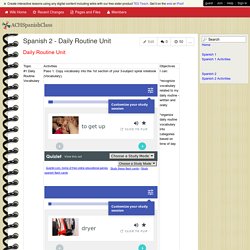 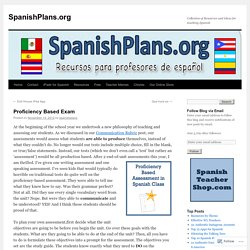 As we discussed in our Communication Rubric post, our assessments would assess what students are able to produce themselves, instead of what they couldn’t do. No longer would our tests include multiple choice, fill in the blank, or true/false statements. Instead, our tests (which we don’t even call a ‘test’ but rather an ‘assessment’) would be all production based. 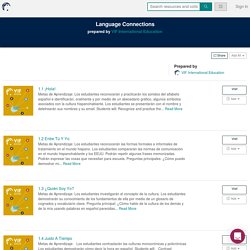 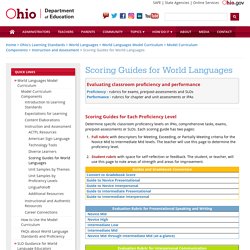 5 ACTFL Interpret rubric ApdxF. CAPS – Foreign Language Educators of New Jersey. CAPS Rubrics Consortium for Assessing Performance Standards A New Jersey FLAP Grant Project By clicking on the links below you can access the rubrics that were created by the CAPS project. 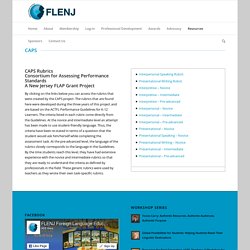 The rubrics that are found here were developed during the three years of this project and are based on the ACTFL Performance Guidelines for K-12 Learners. The criteria listed in each rubric come directly from the Guidelines. At the novice and intermediate level an attempt has been made to use student-friendly language. World Language Assessment: Get In The Mode! Series. Teaching Foreign Languages K-12 Workshop. Workshop 1. 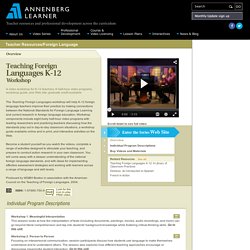 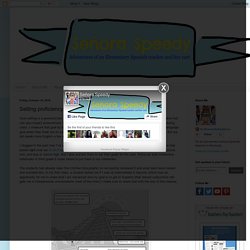 American Council on the Teaching of Foreign Languages. Preface The ACTFL Proficiency Guidelines 2012—Speaking describe five major levels of proficiency: Distinguished, Superior, Advanced, Intermediate, and Novice. The description of each major level is representative of a specific range of abilities. Together these levels form a hierarchy in which each level subsumes all lower levels. The major levels Advanced, Intermediate, and Novice are divided into High, Mid, and Low sublevels. The Guidelines describe the tasks that speakers can handle at each level, as well as the content, context, accuracy, and discourse types associated with tasks at each level.

Easy AAPPL Rubrics. On Fridays We Write! (and some stuff about creating with language) – It's time to..GET YOUR SPANISH ON! Good Friday to you! Today I thought I would share with you our Friday routine, which has proven very powerful for my students this year and me, as well, with my 1 billion preps (it’s only six…but, SIX?!). Warning: I’m going to get through the boring stuff that probably isn’t new to you before I get to the interesting stuff! Every Friday is reflection/assessment day in my classes. The students keep notebooks in which they answer a reflection question and a few assessment questions. I have a fabulous list of reflection prompts generously provided by @ProfeAshley (Ashley Uyaguari). The assessment questions vary depending on the topics we have covered during the week. This week, something interesting happened. Videos y Fotos for LA COMIDA unit. MS Spanish Scope and Sequence. Home - Introduction to Oral Proficiency Levels. Task or Text: the aftermath – The Comprehensible Classroom.

Glogster EDU - 21st century multimedia tool for educators, teachers and students. ALEJANDRO SANZYesterday, Tuesday, November 15th, 2005, the fans of the Spanish singer Alejandro Sanz, were able to see and hear his idol in person at the Radio City Music Hall in New York City. The tickets were sold out a month ago, and the performance of Alejandro Sanz was superior. As usual, Alejandro sang his most popular songs such as “El Alma al Aire” (“The Soul in the Air”), “Mi Soledad y Yo” (“My Lonelyness and I”), “Heroe” (“Heroe”), and more.The concert started on time at 8pm and finished at 11pm.

Three excellent hours of an outstanding performance, Sanz, gave to his fans from all over the world. The adrenaline of the fans was high with the romantic voice of the singer.

Standards. Assessing Proficiency with Student-Friendly Can Do Statements. The ACTFL Proficiency Guidelines are a very helpful tool in the Foreign/World Language Classroom. They provide teachers and students with clear guidelines and descriptions to assess proficiency levels. They are also an effective tool for students and teachers to set achievable and concrete goals.