"This is the first unwritten law of alienation, and we need to be conscious of it: the something we say NO to is never the real enemy, but only the shadow it casts over us and within us.


"The task of theology lies in circumscribing the edges of symbolism and making an enclosure of it." --Khatibi & Sijelmass, The Splendor of Islamic Calligraphy (1994) Typhonian Tomes - Being A Guide To The Works Of Kenneth Grant. By John L.

See what alan moore has to say: – graywyvern 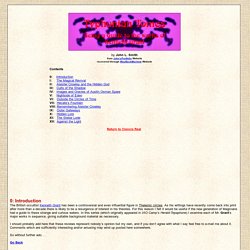 I should probably add here that these reviews represent nobody’s opinion but my own, and if you don’t agree with what I say feel free to e-mail me about it. So without further ado. . . Go Back I: The Magical Revival (Muller 1972, Weiser 1973, Skoob 1992) In his first book Grant takes a more or less straightforward historical approach. Grant’s theology is rather odd: he identifies the God Set with Hoor-Paar-Kraat and with Aiwass. Selected clown paintings.

The icon of the Killer Clown represents the malevolent absurdity of late-modern life. It's not even aimed at us, & yet we die. – graywyvern

Anaglyphic art. The troll of the aurora bridge. Seattle, Washington The Fremont troll -- a big, fearsome, car-crushing bruiser -- took up residence under the north end of the Aurora bridge on Halloween 1990. 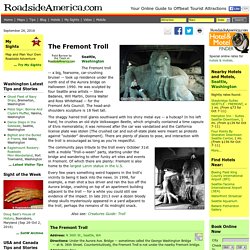 He was sculpted by four Seattle area artists -- Steve Badanes, Will Martin, Donna Walter and Ross Whitehead -- for the Fremont Arts Council. The head-and-shoulders sculpture is 18 feet tall. The shaggy haired troll glares southward with his shiny metal eye -- a hubcap? In his left hand, he crushes an old style Volkswagen Beetle, which originally contained a time capsule of Elvis memorabilia; it was removed after the car was vandalized and the California license plate was stolen (The crushed car and out-of-state plate were meant as protests against "outsider" development). The community pays tribute to the troll every October 31st with a mobile "Troll-o-ween" party, starting under the bridge and wandering to other funky art sites and events in Fremont. 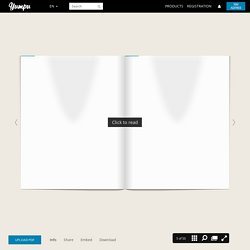 BEDINI As the curling smoke wafts sinuously aloft from a freshly lighted [incense] stick and the first faint whiff strikes the nostrils, a profound symbolism takes effect-even subconsciously. Sijo. Shibuya-kei is dead. Flip through a Japanese magazine like H, the fashion, music and people supplement of Rockin' On Japan, and you'll find articles about Rodney Greenblatt, Rita Ackerman, Harmony Korine, Wong Kar Wai... artists who are often obscure or reviled at home, yet are some of the most interesting and risk-taking creative talents around.

It might stem from their huge respect for the craftsmen, the calligraphers and lacquer makers of Japanese history, but it's also partly a reaction to the conformity expected daily of Japanese workers, who have to click their heels and bow to their colleagues all day long, and are only able to escape furtively into apocalyptic mangas on the tube home, or exquisitely perverse S&M pornography. 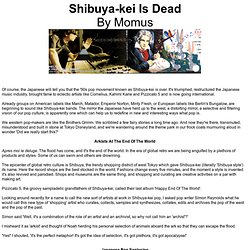 Conformity forces people into a rich underworld of imagination and fantasy. Maybe my affinity with the Japanese pop scene is based on the fact that I too experienced the discipline of a Prussian military academy at my Scottish boarding school. Slide rules.

I still have a couple that my father gave me. in my teens, i used them, as well as logarithm-books, to do my astronomical calculations with. i am glad to see that others remember this curiously archaic higher-math device--sort of a super-abacus. we should remember we went to the moon, partly by means of using them. – graywyvern

Lynx is perhaps my all time favorite zine. – graywyvern