How To Build An Active And Collaborative eLearning Space? In my recent post I had been discussing ways of building flow in the eLearning course. 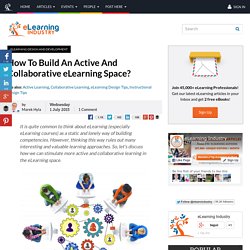 There is some kind of contradiction when we think about this issue: As flow is a personal state of mind, it seems that it should be sought among learning activities that are being done on one’s own. On the other hand, peer-to-peer activities bring engagement and excitement, which seem necessary to reach the state of flow. Let us have a look at how we can create more engaging and collaborative ways of building competencies in the eLearning space.

Variety Of Learning Methods There are hundreds of methods we could use to build one’s competence. Every single learning method has its strong specifics; namely, it is more likely to be used: In the alone or collaborative learning context.In the passive or active learning context. Divergent Thinking In eLearning: What eLearning Professionals Should Know. The word “divergent” is usually associated with rebels, free-thinkers, and anyone else who deviates from societal norms. 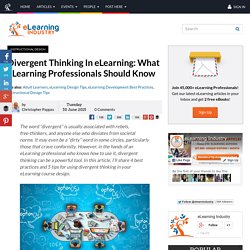 It may even be a “dirty” word in some circles, particularly those that crave conformity. However, in the hands of an eLearning professional who knows how to use it, divergent thinking can be a powerful tool. In this article, I’ll share 4 best practices and 5 tips for using divergent thinking in your eLearning course design. Divergent thinking is a problem solving approach wherein learners are encouraged to consider a variety of different solutions, rather than just providing them with a limited number of conclusions.

By doing this, learners have the opportunity to analyze a myriad of solutions and strategies to find out which one will work best for the particular problem or challenge. At its core, divergent thinking is all about using creative, analytical, and lateral thinking skills to arrive at a viable answer. Observation comes before feedback. The 7 e-Affordances In eLearning. From eLearning Industry by Caterina Mastroianni URL: An online course should provide a rich learning experience for all learners. 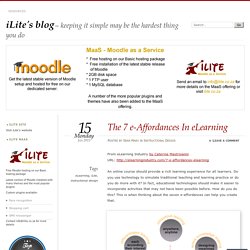 Do you use technology to simulate traditional teaching and learning practice or do you do more with it? In fact, educational technologies should make it easier to incorporate activities that may not have been possible before. How do you do this? This is when thinking about the seven e-affordances can help you create that. Explained by Dr. Here are the 7 e-affordances: Ubiquitous learning.Ubiquitous learning makes it easier for learners to access content from any computer or mobile device, online or offline, anywhere and anytime. It’s worth thinking about what elements you need to design and run an effective online course, so that learners don’t miss out on new ways of learning. How to respond to learning-style believers. “What do you mean, I shouldn’t accommodate people’s learning styles? 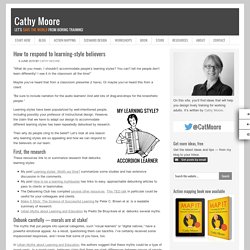 You can’t tell me people don’t learn differently! I see it in the classroom all the time!” Maybe you’ve heard that from a classroom presenter (I have). Or maybe you’ve heard this from a client: “Be sure to include narration for the audio learners! A model for cultural pattern appropriation in learning. Recently we have worked with my colleague Tobias Ley, on the figure to describe how distributed cognition and pattern-formation associate with individual, collaborative and collective learning – A model for cultural pattern appropriation in learning. 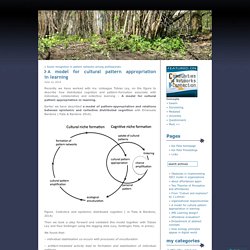 Earlier we have described a model of pattern-appropriation and relations between epistemic and collective distributed cognition with Emanuele Bardone ( Pata & Bardone 2014). Figure. Collective and epistemic distributed cognition ( in Pata & Bardone, 2014) Then we took a step forward and validated this model together with Tobias Ley and Paul Seitlinger using the tagging data (Ley, Seitlinger, Pata, in press). We found that: – individual stabilization co-occurs with processes of enculturation – artifact-mediated activity lead to formation and stabilization of individual patterns – collective stabilization is a result of individual pattern formation and artifact-mediated social feedback. 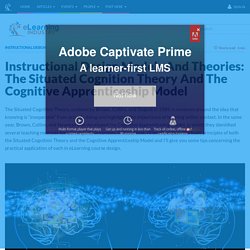 In the same year, Brown, Collins, and Newman also developed the Cognitive Apprenticeship Model, in which they identified several teaching methods for learning within context. In this article, I’ll briefly explain the basic principles of both the Situated Cognition Theory and the Cognitive Apprenticeship Model and I’ll give you some tips concerning the practical application of each in eLearning course design. The Situated Cognition Theory is based upon principles related to the fields of anthropology, sociology and cognitive sciences. How 'digital natives' are killing the 'sage on the stage' The idea that teachers should teach and students should listen presumes that teachers know more than their students. 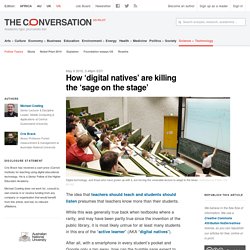 While this was generally true back when textbooks where a rarity, and may have been partly true since the invention of the public library, it is most likely untrue for at least many students in this era of the “active learner” (AKA “digital natives”). After all, with a smartphone in every student’s pocket and Google only a tap away, how can the humble sage expect to compete as the font of all online knowledge? The world is a stage The very birth of the lecture comes from medieval times, when books were difficult to make and experts were few and far between. Back in those days, the best way to record knowledge was for a monk to stand up the front of the room and recite the passages from a manuscript or book, while the novices below him hurriedly wrote down exactly what was said. Click to enlarge Since then the role has evolved, but the basic principle has remained the same. The Deeper Ethics of Education and Open: Generosity, Care, and Relationships.