GradoZero Innovation Srl. The mission is to help other companies to develop a new generation of manufacturing products: #Sustainable, #Smart, #Performing

Muskin on topsy.one. Q&A: Stefan Sielaff on reinventing Bentley - Car Design News. Mushrooms inside a Bentley would normally be a sign that your barn-find classic is in need of an expensive restoration, but the company is currently pondering whether to introduce the friendly fungus on purpose. 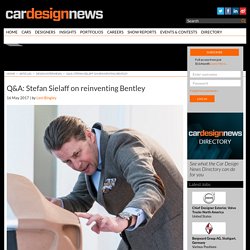 Mushroom-based leather, along with equally unlikely jellyfish leather, could be on the menu for future luxury interiors, according to Bentley Motors director of design Stefan Sielaff. Speaking at the FT Future of the Car Summit held in London last week, Sielaff said that new materials will be needed to satisfy the growing tranche of customers living a vegan, cruelty-free lifestyle. “You can’t sell them a Bentley with 20 leather hides inside,” he told delegates. “We’ve been talking to these customers – in California especially – and they are asking, ‘What can you give us?’ We want to satisfy these customers, because they are the peak of a trend. MuSkin has created a "mushroom leather" – ideal for vegans. François-Henri Pinault on a More Sustainable Fashion Industry - Bloomberg. As you slip into heels or a tux to toast the New Year, you probably won’t be thinking about the fact that the leather in your shoes polluted drinking water in Indian villages, or that merino sheep were made miserable for your suit—and François-Henri Pinault doesn’t want you to have to. 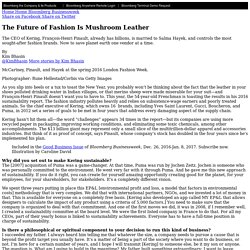 This year, the 54-year-old Frenchman is toasting the results in his 2016 sustainability report. The fashion industry pollutes heavily and relies on subsistence-wage earners and poorly treated animals. So the chief executive of Kering, which owns 16 brands, including Yves Saint Laurent, Gucci, Boucheron, and Puma, in 2012 set a series of goals to be met in four years that address every damaging aspect of the supply chain. Kering hasn’t hit them all—the word “challenges” appears 34 times in the report—but its companies are using more recycled paper in packaging, improving working conditions, and eliminating some toxic chemicals, among other accomplishments.

MuSkin - ecofriendly-fashion.com. WHAT IS MUSKIN? 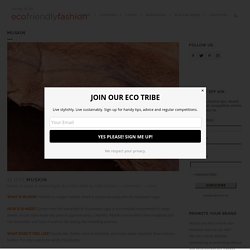 MuSkin is a vegan leather which is produced using skin of mushroom caps. HOW IS IS MADE? Grown from the extraction of mushroom caps in a controlled environment in large sheets. A cow sized hyde will grow in approximately 2 months. Muskin can be dried then moulded and can assimilate any type of animal skin during the moulding process.

WHAT DOES IT FEEL LIKE? You won’t believe what these vegan leather products are made of – The Earth Child. The vegan enthusiasts have a good reason to cheer. 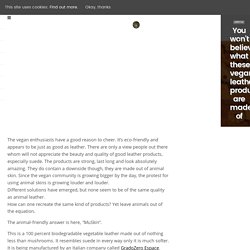 It’s eco-friendly and appears to be just as good as leather. There are only a view people out there whom will not appreciate the beauty and quality of good leather products, especially suede. The products are strong, last long and look absolutely amazing. They do contain a downside though, they are made out of animal skin. Since the vegan community is growing bigger by the day, the protest for using animal skins is growing louder and louder. Untitled. Though the use of animal hides dates to prehistory, now traditional leather manufacturers have to compete with more eco-friendly and humane alternative materials. 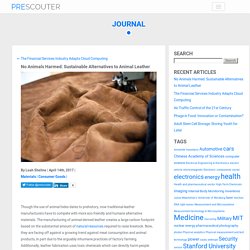 The manufacturing of animal-derived leather creates a large carbon footprint based on the substantial amount of natural resources required to raise livestock. Now, they are facing off against a growing trend against meat consumption and animal products, in part due to the arguably inhumane practices of factory farming. Additionally, leather fabrication uses toxic chemicals which can directly harm people through skin-to-fabric contact and can also be indirectly harmful to people and the environment.

Due to these trends, leather is now scarcer and, therefore, more expensive for manufacturers, designers, and consumers. Previous solutions like plastic-based textiles (e.g., pleather, which is made from polyurethane) and other synthetic textiles have been used as alternatives to leather. See the Ingenious Ways People Are Making Vegan Leather. Gloves, handbags, wallets, watches, you name it: There’s a laundry list of accessories that have traditionally been made from leather—yes, the unfortunate kind that was originally the skin of an animal. 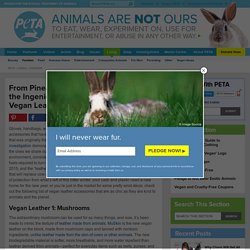 And as PETA’s recent dog-leather investigation demonstrates, this could mean a lifetime of misery for animals just like the ones we share our homes with, not to mention indicating trouble for the environment, considering the huge amounts of feed, pastureland, water, and fossil fuels required to turn animal skins into accessories. Not to fret, friends—it’s officially 2015, and the “leather” industry is being redefined with sustainable vegan materials that will replace cow and dog skin permanently. Vegan Leather 1: Mushrooms The extraordinary mushroom can be used for so many things, and now, it’s been made to mimic the texture of leather made from animals. 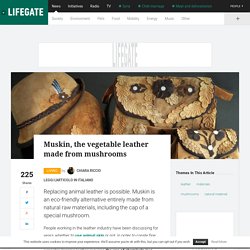 Muskin is an eco-friendly alternative entirely made from natural raw materials, including the cap of a special mushroom. People working in the leather industry have been discussing for years whether to use animal skin or not, in order to create fine pieces of clothes. But there’s another important issue to consider: tanning leather requires the use of chemicals that have serious environmental impacts. Muskin, invented by the company Zero Grado Espace, based in Montelupo Fiorentino, is the perfect solution to these problems. Pure vegan Banana paper-leather – Life Materials.

Pure Banana paper-leather is approved by PETA Unlike most fruit trees, banana trees produce fruit just once and must be chopped down after harvest because they will self-reproduce from the base. 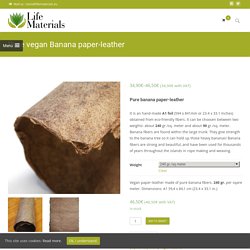 Normally, the trees are left in the jungle as unwanted waste. Now on Kosrae, over 75 local farmers earn extra income from selling their trees to us. That’s why we call it “waste to wealth”. Mushrooms Provide Biodegradable, Vegan Leather. From Muskin to MycoBoard: How Mushrooms Can Replace Everything. What if you could wear real leather, but you didn’t have to take it from an animal? 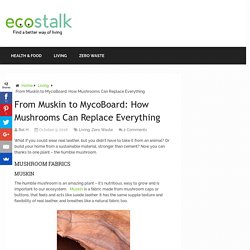 Or build your home from a sustainable material, stronger than cement? Now you can thanks to one plant – the humble mushroom. MuSkin: Pilze imitieren Echtleder. François-Henri Pinault on a More Sustainable Fashion Industry - Bloomberg. WILL THE FUTURE OF FABRICS BLOW OUR MINDS? - Interlaced. Smart fabrics & wearable tech going hand-in-hand for more fashionable user-friendly innovations Numbers of experts all around the world truely believe in the future of smart materials. 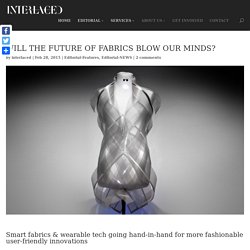 Trending: Wonder Food Can Make Products Softer than Suede, Sweeten Foods Better Than Sugar. Here are two innovations that give new meaning to the phrase "magic mushrooms": An Italian textile manufacturer has used a skin extracted from giant mushroom caps to create a leather-like material similar to suede; and a Colorado-based startup has found a way to use mycelium molecules to block bitter tastes on a person’s tongue as they eat, meaning they’ll only taste the other flavor profiles of the food. Italian textile manufacturer Grado Zero Espace’s leather alternative is called ‘Muskin.’ It is ‘vegan’ since it is plant-based, made entirely from skin extracted from giant mushroom caps. Lab tests have proven that the material is similar to suede but much softer, breathable and water repellent while still delivering durability performance.

The tests showed it does not promote the proliferation of bacteria, and is able to absorb and then release moisture. Muskin : Le nouveau cuir végétal - Bii-Fashion. Mushroom-Based Leather : mushroom leather. Muskin, the vegetable leather made from mushrooms. Muskin is a 100% biodegradable vegan - LOL Effect. From Pineapples to Kombucha Tea: See the Ingenious Way Designers Are Making Vegan Leather. Mushroom leather: looks like real leather. Water is present in most leather processing steps. It is used as a vehicle for the diffusion of chemicals and washing of the skins.

Clean water enters and exits with aggressive chemical and organic waste to the environment. We’ve talked here in Eat Innovation about the fruit leather, that although promising, it still has a serious problem of lack of resistance. Now there is another sustainable alternative: mushroom leather. American startup MycoWorks makes their product from the mycelium of mushrooms of the species Ganoderma lucidum, also known as Reishi mushroom, very popular in Asia where it is used to make medicines and teas.

The fungus is being cultivated in the laboratory, but is easily found in dead wood and agricultural waste such as sawdust, corncobs and hemp. Muskin, le cuir 100% végétal fabriqué avec des champignons - Blog de nibrik. Three vegan leathers that change everything. Muskin is a 100% biodegradable vegan leather made from mushroom caps. "Muskin" Mushroom Leather is the Next Cruelty-Free Textile! Muskin leather. Grado Zero Espace - Nettle and natural dyes. An environmentally friendly alternative to contemporary textiles and dyes has been researched and produced by the Grado Zero Espace team.

They have woven fabric from stinging nettle fibres. The stinging nettle fibre goes back a long way in history. The name URTICA, as it is called in Europe, derives from the Latin word 'uro' which means to burn. During World War I and World War II nettles were used to substitute cotton yarns that were unavailable. But the most interesting fact is that thousands of uniforms from Napoleon's Armada were woven from nettles. Textiles made of nettle fibres are a useful alternative to other natural fibres such as hemp, linen and cotton and will play an increasingly important role in the next 5 to 7 years.

Top 7 Popular Eco-Fashion Stories of 2016 (Vote for Your Fave) Earthables - Muskin is a 100% biodegradable vegan leather... FABRICTIONARY: MuSkin is a Vegan "Leather" Made Entirely From Mushrooms. Fashion grounded, Space inspired – Advanced Textiles Source. Are you sure you wish to continue? Grado Zero Espace Survival in Space is a major challenge for textile and apparel designers as they look to develop materials and technologies to help humans travel, live and work in its extreme environment. Space industries such as the National Aeronautics and Space Administration (NASA) and the European Space Agency (ESA) provide technologies for material scientists, fashion and sportswear designers through technology transfer and commercialization programs.

Equally important is the inspiration that Space apparel provides for designers to imagine what we might wear in the near and distant future. What is emerging are visionary companies and individuals that work with the Space industries in America and Europe to develop the clothing of the future for terrestrial use. Where to Get Muskin (Mushroom Leather) – Vegan Dan Dan. I’m sure everyone has seen the mushroom leather vid that’s been trending on the internet, posted by influencers such as David Wolfe and the like. Someone commented on my Facebook asking where to get it and with a bit of sleuthing I figured it out!

Every year, over 60 billion land animals are reared and slaughtered, (mostly in dire and cruel conditions) to meet the increasing demands of us, six billion humans, for meat and leather. Putting all ethical concerns aside for a moment, the environmental impacts of this alone, are staggering. PETA-Approved Vegan. PETA-Approved Vegan Vegan fashion – clothes, shoes and accessories that contain no leather, fur, wool, skin, exotic skins or any other animal-derived fabric – is revolutionising the way that we shop and dress. As more and more people vow never to clothe themselves in cruelty, retailers and designers are meeting the demand for animal-friendly clothes in style. Oltre 1000 immagini su MUSKIN the mushroom skin alternative to animal leather su Pinterest. MuSkin: A Vegan “Leather” Made Entirely From Mushrooms. N. 1 a: A 100 percent biodegradable vegetal Leather, extracted from Mushroom caps and “tanned” using chemical-free methods. b: Resembles suede but is “much softer,” according to Italy-based Textile manufacturer GradoZero Espace. c: Described as breathable, pliable, naturally water-repellant, and suitable for direct contact with human skin. d: Claims to stymie the proliferation of bacteria. 2: Easily shaped into myriad three-dimensional forms, including purses, watch straps, shoe insoles, and hats. 3: Similar to Myx, a Danish-made Textile made by fusing commercial Mushroom production waste with hemp or linen fibers to create a durable yet flexible matrix. © Ecouterre, 2016. | Permalink | 7 comments | Add to del.icio.us.