Sustainable Fashion—How to Report on a Growing Industry - Reynolds Center. Reporters can investigate both environmental and fair labor issues when writing about sustainable fashion. 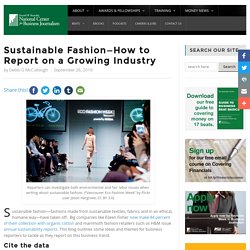 Brexit versus global thinking: the new internationalism in marketing. Spare a thought for the British-born chief executive of a Seattle ad agency whose colleagues have taken to shouting "Brexit! 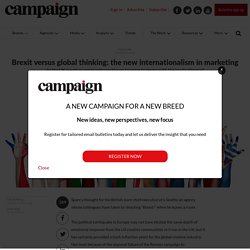 " when he leaves a room. Next-generation retail - Packaging Today. As the UK retail environment sees massive shifts in consumer purchasing behaviour, expanding convenience shopping and uncertainty over Brexit, how can brands and their retail partners remain relevant on the shelves? 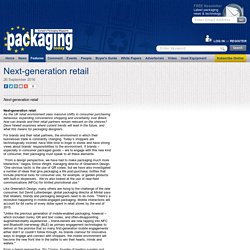 Dave Howell examines where current trends will lead in the future, and what this means for packaging designers. For brands and their retail partners, the environment in which their businesses trade is constantly changing. Today’s shoppers are technologically inclined, have little time to linger in stores and have strong views about brands’ responsibilities to the environment. If brands – especially in consumer packaged goods – are to engage with this new kind of consumer, their packaging must speak to all these elements. Top 4 Trends Impacting the Global E-commerce Market Through 2020: Technavio. LONDON--(BUSINESS WIRE)--Technavio’s latest report on the global e-commerce market provides an analysis on the most important trends expected to impact the market outlook from 2016-2020. 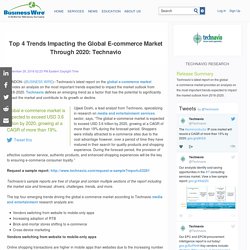 Technavio defines an emerging trend as a factor that has the potential to significantly impact the market and contribute to its growth or decline. Global e-commerce market is expected to exceed USD 3.6 trillion by 2020, growing at a CAGR of more than 19%.Tweet this. Opening new stores isn’t the answer for UK retailers. STORES Trends: September 2016. 5 trends reshaping back-to-school shopping in 2016. Back-to-school shopping season is back in full swing. 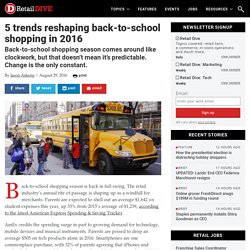 The retail industry’s annual rite of passage is shaping up as a windfall for merchants: Parents are expected to shell out an average $1,642 on student expenses this year, up 33% from 2015’s average of $1,239, according to the latest American Express Spending & Saving Tracker. AmEx credits the spending surge in part to growing demand for technology, mobile devices and musical instruments. Uk.businessinsider. Reuters/Stringer E-commerce is growing every year and shows no signs of slowing down. 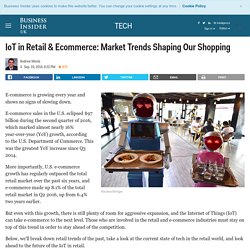 E-commerce sales in the U.S. eclipsed $97 billion during the second quarter of 2016, which marked almost nearly 16% year-over-year (YoY) growth, according to the U.S. Department of Commerce. This was the greatest YoY increase since Q3 2014. Brexit has had 'no major effect' on economy so far. Image copyright AFP There has been little impact of the Brexit vote on the UK economy so far, says the Office for National Statistics (ONS). 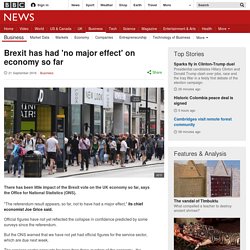 "The referendum result appears, so far, not to have had a major effect," its chief economist Joe Grice said. Britain will thrive following Brexit as economy surges ahead. A monthly analysis of forecasts prepared for Chancellor Philip Hammond showed that dozens of independent experts believe national output will continue growing this year. 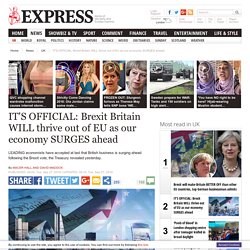 On average, they expect growth to continue at exactly the same rate as forecast before the EU referendum. The verdict was a major reversal following earlier expectations that the country’s decision to leave the EU would deliver a massive shock to the economy. Instead, the data suggests that the historic vote had no significant impact on growth at all. China slowdown is global economy's biggest threat, Rogoff says. Brexit vote 'will not dent economy this year' as UK growth forecasts back to pre-referendum levels. Could bad buildings damage your mental health? Screaming sirens, overcrowding, traffic; life in the city isn’t always relaxing. 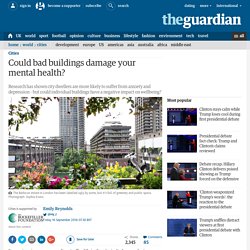 These stressors aren’t simply inconvenient or irritating, though; research has suggested that urban living has a significant impact on mental health. One meta-analysis found that those living in cities were 21% more likely to experience an anxiety disorder – mood disorders were even higher, at 39%. Apple workers blame mental health issues on 'toxic work environment' at tech company. Apple has been accused of having a 'toxic' work environment, which current and ex-workers say their their mental health problems stem from, a report published Wednesday said. 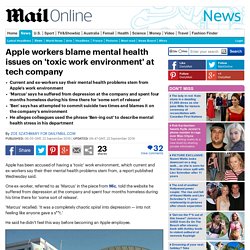 One ex-worker, referred to as 'Marcus' in the piece from Mic, told the website he suffered from depression at the company and spent four months homeless during his time there for 'some sort of release'. 'Marcus' recalled: 'It was a completely chaotic spiral into depression — into not feeling like anyone gave a s**t.' He said he didn't feel this way before becoming an Apple employee. Apple has been accused of having a 'toxic' work environment, which current and ex-workers say their their mental health problems stem from, a report published Wednesday said. Debts 'affect children's mental health'

Student mental health 'lacks support' Mental Health Care Is In Crisis And The Consequences Will Be Fatal. Mental health care in England and beyond Is hitting a real point of Crisis. Over the last few decades and in particular the last decade we have seen an increase in the visibility of Mental Health problems due to the hard work of charities and other organisations channelling energy into the education of the nation, relentlessly stamping out the stigma surrounding such illnesses.

To me the Mental Health Services in England have always been, like the rest of the NHS, vastly underfunded. I have been under the care of the NHS for various Mental Health conditions from entry point via my GP initially in 2010 it started with depression and soon came to realisation that anxiety was a major player and something I had experienced throughout my lifetime, the depression seemed to take hold after my Grandads passing in summer of 2010.

Visual merchandising in a digital era: Instagram-friendly. Mannequins: For Fun and Profit.