Davos Agenda: What you need to know about geopolitics. The COVID-19 pandemic is a reminder of the need for international cooperation. 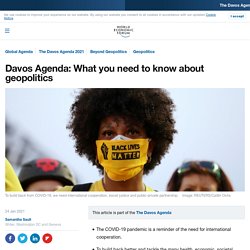 To build back better and tackle the many health, economic, societal, environmental and technological challenges ahead, we need meaningful multilateral action, social justice and public-private partnership. From 25-29 January, the Davos Agenda will virtually convene world leaders to discuss these geopolitical challenges. Following the 2020 Annual Meeting in Davos, World Economic Forum President Børge Brende called for “another period of multilateral renewal” in order for the world to tackle the multitude of economic, environmental and technological risks ahead.

“The ability to act in concert and with purpose within a tumultuous global environment won’t be easy, but it will be necessary,” he said. Within weeks, we would see more clearly just how true this was – with the COVID-19 coronavirus swiftly making its way around the globe, wreaking economic destruction and heightening geopolitical tensions. 1. 2. 3. 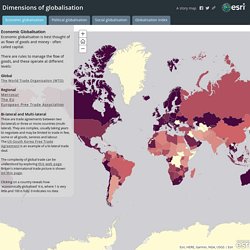 There are rules to manage the flow of goods, and these operate at different levels: Global The World Trade Organisation (WTO) Regional Mercosur The EU European Free Trade Association Bi-lateral and Multi-lateral These are trade agreements between two (bi-lateral) or three or more countries (multi-lateral). The US-South Korea Free Trade Agreement is an example of a bi-lateral trade deal. The complexity of global trade can be understood by exploring this web page. Britain's international trade picture is shown on this page. Dimensions of globalisation. Twitter. An Investing Megatrend: How Emerging Wealth is Shaping the Future. View a high-resolution version of this graphic here. 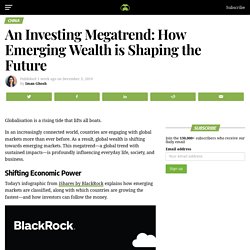 From agrarian economy to global superpower in half a century—China’s transformation has been an economic success story unlike any other. Today, China is the world’s second largest economy, making up 16% of $86 trillion global GDP in nominal terms. If you adjust numbers for purchasing power parity (PPP), the Chinese economy has already been the world’s largest since 2014. The upward trajectory over the last 70 years has been filled with watershed moments, strategic directives, and shocking tragedies — and all of this can be traced back to the founding of the People’s Republic of China (PRC) on October 1st, 1949.

How the PRC Came to Be The Chinese Civil War (1927–1949) between the Republic of China (ROC) and the Communist Party of China (CPC) caused a fractal split in the nation’s leadership. Today’s timely chart looks back on seven decades of notable events and policies that helped shape the country China has become. See a few photos by location that show the global reach of @CocaCola on a #storymap @ArcGISStoryMaps @ArcGISOnline #StoryMaps #Maps #Cartography… Global-is-Asian (GIA) Twitter. Davos Elites Fear They're on a Toboggan Ride to Hell. DAVOS, Switzerland—Populist movements around the world, left and right, disagree in detail but are united around one big idea: The political and economic elites running modern societies are very powerful people who know what they are doing. 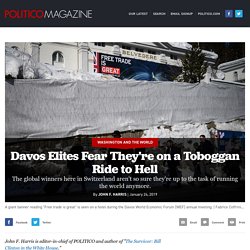 What they are doing is often bad—greedy, exploitative, short-sighted—but they are doing it with purpose and confident control. Story Continued Below A different possibility, however, hung in the alpine air this week at the annual convening of elites here at the World Economic Forum: These alleged masters of the universe came off nearly as perplexed and anxious about the future as the populist forces inveighing against them. They have money. They have entourages. That doesn’t mean they have a clue. Foreboding about the future was a prevailing theme at this year’s Davos, sometimes even with a dash of dystopian prophecy. In key Western capitals, governance is failing. That specific line was on the global economy. Good luck with that. Danny Quah sur Twitter : "it fostered the beginnings of creative destruction in the internet economy, through Compuserve, AOL, and others now forgotten but reborn into Google, Amazon, and Facebook. And Japan? It missed out entirely on the software, person.

On the prosperity of countries. Trade and Globalization. Twitter. #OTD 1968: "Television makes the child the consumer" The Money Programme asked if the British toy industry could survive in the face of increasing global competition… (Matchbox, Spirograph, Space Hopper)