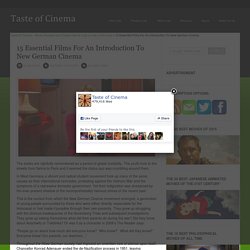 The youth took to the streets from Selma to Paris and it seemed the status quo was crumbling around them. In West Germany a vibrant and radical student movement took up many of the same causes as their international comrades, protesting against the Vietnam War and the symptoms of a repressive domestic government. Yet their indignation was sharpened by the ever-present shadow of the incomprehensibly heinous crimes of the recent past. This is the context from which the New German Cinema movement emerged, a generation of young people surrounded by those who were either directly responsible for the Holocaust or had made it possible through their own passivity.

They grew up struggling with the obvious inadequacies of the Nuremberg Trials and subsequent investigations. “People go on about how much did everyone know? Throughout the fifties German society had imposed an unwritten vow of silence upon itself. 1. 2. 3. 4. 5. Security Check Required. The 18 Best Films Set in Berlin. It’s one of cinema’s greatest ironies that Hollywood benefited greatly from Germany’s arguably self-inflicted tragedies. 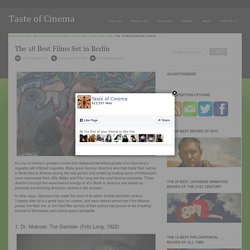 Many great German directors who had made their names in Berlin fled to America during the nazi period, and ended up making some of Hollywood’s most memorable films. Billy Wilder and Fritz Lang are the most famous examples. These directors brought the experimental energy of 30’s Berlin to America and ended up positively transforming American cinema in the process. In other ways, Germany has made the most of its rather terrible twentieth century. Tragedy after all is a great topic for cinema, and each distinct period (be it the Weimar period, the Nazi era, or the Cold War period) of that century has proven to be of lasting interest to filmmakers and cinema-goers worldwide. 1. At four and a half hours long, Fritz Lang’s Dr. Mabuse has unsuprisingly been compared to characters like Svengali, Fu Manchu, Moriarty and Fantomas. 2. 3. 4. 5. 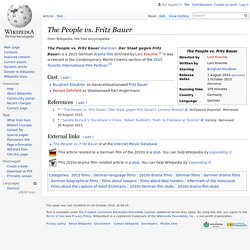 We’ve talked you through the French and Italian movies from Martin Scorsese’s list of 39 movies that every young filmmaker should watch. 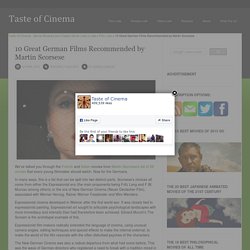 Now for the Germans. In many ways, this is a list that can be split into two distinct parts. Great Film, and more great german films. Berlin Calling (2008) Helge Schneider. Helge Schneider (born 30 August 1955 in Mülheim an der Ruhr) is a German comedian, jazz musician and multi-instrumentalist, author, film and theatre director, and actor. 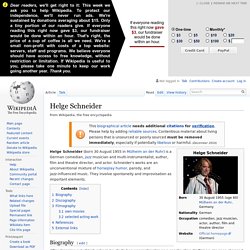 Schneider's works are an unconventional mixture of horseplay humor, parody, and jazz-influenced music. They involve spontaneity and improvisation as important elements. Biography[edit] After dropping out of high school, he started an apprenticeship as a construction draftsman. He soon changed plans and was admitted to the Duisburg conservatory to study piano, after passing an entrance exam for particularly gifted applicants (it later turned out that his diploma was invalid since he dropped out of high school too early). He became a popular comedian in the 1990s and is still one of the best known German comedians. Schneider has written nine books, including an autobiography ("My whole life's in this book, up to right now. Wenzel Storch. Wenzel Storch (born 1961, Braunschweig, West Germany) is a German film director and producer.[1] Films[edit] References[edit] External links[edit] 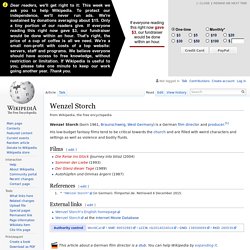 L'ami américain (1977) Victoria (2015 film) Victoria is a Spanish girl who moved to Berlin three months earlier, works in a cafe for a meager wage, does not speak German and does not know anybody in the new city. 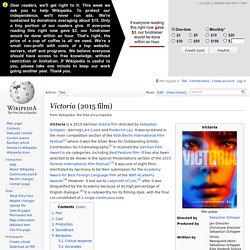 Leaving a club at around 4 o'clock in the morning after a night of dancing and drinking, she meets four young men who are denied entry to the club. They are "Sonne" (sun), "Boxer", "Blinker" (turn signal), and "Fuss" (foot). The men invite her to take a walk through the city and she agrees. After stealing some alcohol from an all night shop, they all get on the roof of an apartment building where they drink and smoke marijuana together, while Boxer reveals that he spent time in jail for hurting someone.

When Victoria tells the others that she has to leave because she must open up the cafe she works at in a short time, Sonne, who was flirting with her the whole time, suggests accompanying her there and she agrees. 15 Essential Films For An Introduction To New German Cinema. Si loin, si proche! (1993) The 18 Best Films Set in Berlin. Until the End of the World (1991)