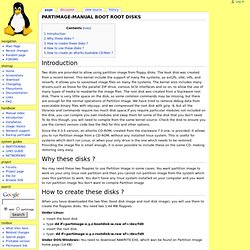 The boot disk was created from a recent kernel. This kernel include the support of many file systems, as ext2fs, vfat, ntfs, and reiserfs. It allows you to save/read image files on many file systems. The kernel also includes many drivers,such as those for the parallel ZIP drive, various SCSI interfaces and so on, to allow the use of many types of media to read/write the image files. Since the 0.3.5 version, an eltorito CD-ROM, created from the slackware 7.0 one, is provided. You may need these two floppies to use Partition Image in some cases: You want partition image to work on your only linux root partition and then you cannot run partition image from the system which uses this partition to work.

When you have downloaded the two files (boot disk image and root disk image), you will use them to create the floppies disks. Under Linux: First, you must insert the boot disk, and power on your computer. ProduKey - Recover lost product key (CD-Key) of Windows/MS-Office/SQL Server. Related Links Recover lost CD keys for Windows and 10000+ major programs - including products of Adobe, Symantec, Autodesk, and more... 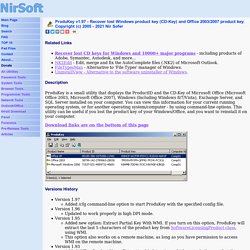 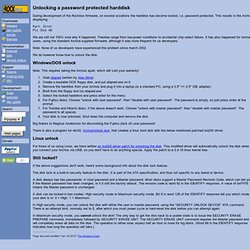 This results in the Archos displaying: Part. Error Pls Chck HD We are still not 100% sure why it happened. Theories range from low-power conditions to accidental chip select failure. Note: None of us developers have experienced this problem since march 2002. We do however know how to unlock the disk: Windows/DOS unlock Note: This requires taking the Archos apart, which will void your warranty! Grab atapwd (written by Alex Mina) Create a bootable DOS floppy disk, and put atapwd.exe on it Remove the harddisk from your Archos and plug it into a laptop (or a standard PC, using a 3.5" => 2.5" IDE adapter) Boot from the floppy and run atapwd.exe Select the locked harddrive and press enter for the menu For Fujitsu disks: Choose "unlock with user password", then "disable with user password". 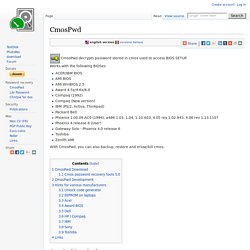