Getting Started With CSS calc() I first discovered the calc() function more than four years ago, thanks to CSS3 Click Chart1, and I was absolutely delighted to see that basic mathematical computations — addition, subtraction, multiplication and division — had found their way into CSS. 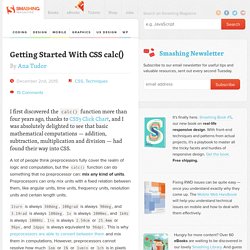 A lot of people think preprocessors fully cover the realm of logic and computation, but the calc() function can do something that no preprocessor can: mix any kind of units. Preprocessors can only mix units with a fixed relation between them, like angular units, time units, frequency units, resolution units and certain length units. 1turn is always 360deg, 100grad is always 90deg, and 3.14rad is always 180deg. 1s is always 1000ms, and 1kHz is always 1000Hz. 1in is always 2.54cm or 25.4mm or 96px, and 1dppx is always equivalent to 96dpi. Easing Functions (aka Timing Functions) in CSS3. CSS. How I Work with Color. Ceaser - CSS Easing Animation Tool - Matthew Lein. CSS Animation for Beginners. The human brain is hardwired to pay attention to moving objects. 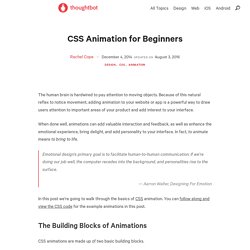 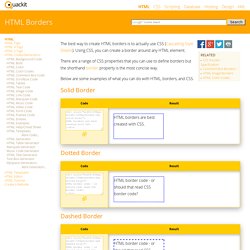 Using CSS, you can create a border around any HTML element. There are a range of CSS properties that you can use to define borders but the shorthand border property is the most concise way. Below are some examples of what you can do with HTML, borders, and CSS. Solid Border Dotted Border Dashed Border Outset Border. Contents. MediaTable jQuery Plugin. Oggi mi sono imbattuto in un ottimo articolo di FilamentGroup riguardante l’usabilità di una tabella dati su schermi di piccole dimensioni. 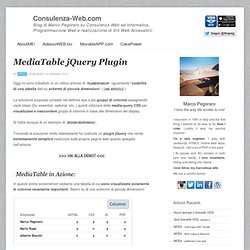 Containing a large variety of icons, you're sure to find something that tickles your fancy. And all for a low low price of $0.00. You can't say fairer than that. Current version: 1.3. Trello CSS Guide · GitHub. Hello, visitors! 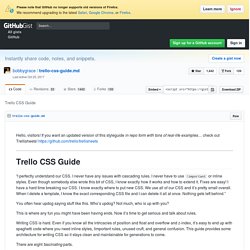 If you want an updated version of this styleguide in repo form with tons of real-life examples… check out Trellisheets! Trello CSS Guide “I perfectly understand our CSS. The Elements of Typographic Style Applied to the Web – a practical guide to web typography. Fonts. CSS Font Shorthand Property Cheat Sheet. In the past I’ve displayed some serious animosity towards the CSS font shorthand property, so I feel I should make up for it. 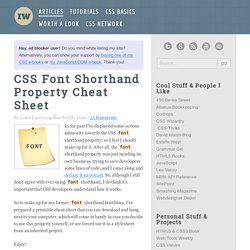 After all, the font shorthand property was just minding its own business, trying to save developers some lines of code, and I come along and declare it an outcast. So, although I still don’t agree with ever using font shorthand, I do think it’s important that CSS developers understand how it works. So to make up for my former font shorthand hostilities, I’ve prepared a printable cheat sheet that you can download and hang next to your computer, which will come in handy in case you decide to use this property yourself, or are forced use it in a stylesheet from an inherited project. Enjoy! Download the CSS Font Shorthand Cheat Sheet (PDF) Advertise Here Comment Rules: Please use a real name or alias. CSS3 Radial Gradients.

Article update: 12th December 2012 The article has been updated to cover the gradient syntax covered in the (at the time of writing) latest Image Values and Replaced Content Module Level 3 specification, dated June 12th 2012. 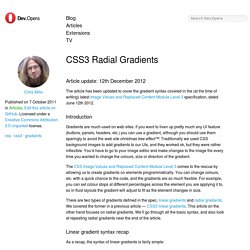 Introduction Gradients are much-used on web sites: if you want to liven up pretty much any UI feature (buttons, panels, headers, etc.) you can use a gradient, although you should use them sparingly to avoid the web site christmas tree effect™. Traditionally we used CSS background images to add gradients to our UIs, and they worked ok, but they were rather inflexible. You’d have to go to your image editor and make changes to the image file every time you wanted to change the colours, size or direction of the gradient. The CSS Image Values and Replaced Content Module Level 3 comes to the rescue by allowing us to create gradients on elements programmatically.

There are two types of gradients defined in the spec, linear gradients and radial gradients. Position Colour stops. Test Drive - CSS3 Filters : MSEdge Dev. CSS3 filters allow you to change the rendering of an element before it is displayed in the document. 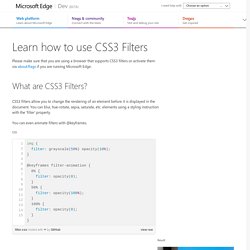 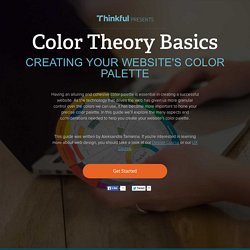 Having an alluring and cohesive color palette is essential in creating a successful website. As the technology that drives the web has given us more granular control over the colors we can use, it has become more important to hone your precise color palette. In this guide we’ll explore the many aspects and considerations needed to help you create your website’s color palette. Get notified when new guides are released Getting Started. CSS3.

CSS. Five simple steps to designing grid systems - Part 5. – September 19th, 2005 – It’s been a while, but this is the final part in my series ‘Five Simple Steps to designing Grid Systems’. Flexible vs Fixed. Which one to choose? Why choose one over the other? Well you won’t find the answers to those questions here. Lets’s start by briefly examining Fixed and Flexible, or Fluid designs.

They both have their merits. Fixed width designs are, well, just easier to produce. Flexible width designs scale to the user’s resolution, and therefore the browser window. How To Create a Pure CSS Dropdown Menu. With the help of some advanced selectors a dropdown menu can be easily created with CSS.

Throw in some fancy CSS3 properties and you can create a design that was once only achievable with background images and Javascript. Follow this tutorial to see the step by step process of building your own pure CSS dropdown menu. The menu we will be creating features two sub categories that appear once the parent link is activated by a hover. The first series of sub-links appear underneath main nav bar, then the second series of links fly out horizontally from the first dropdown. Take a look at the CSS dropdown menu demo to see it all in action. View the pure CSS dropdown menu demo. CSS3 Patterns Gallery. Wave (294 B)✖by Paul Salentiny Browser support The patterns themselves should work on Firefox 3.6+, Chrome, Safari 5.1, Opera 11.10+ and IE10+. However, implementation limitations might cause some of them to not be displayed correctly even on those browsers (for example at the time of writing, Gecko is quite buggy with radial gradients).

Also, this gallery won’t work in Firefox 3.6 and IE10, even though they support gradients, due to a JavaScript limitation. Submission guidelines. CSS Front-end Frameworks with comparison - By usabli.ca. Flexbox For Interfaces All The Way: Tracks Case Study. The days of floats and margin trickery are finally behind us, as CSS furnishes developers with new and improved properties perfect for those delicate layouts. Layout features such as vertical alignment, evenly distributed spacing, source-order control and other patterns such as “sticky” footers are quite effortless to achieve with flexbox1. In this article, we’ll discuss layout patterns well suited to flexbox, using the interface from the Tracks2 application, which also takes advantage of atomic design principles. I’ll share how flexbox proved useful and note the pitfalls of pairing it with particular layout patterns. We’ll look at those patterns that caused concern, provide suggestions for fallbacks and share additional tactics to start using this CSS property immediately.

CSS Gradient Generator. LEARN to: CODE/CSS/CREATE.. Understanding the CSS Transforms Matrix. Introduction The matrix functions — matrix() and matrix3d() — are two of the more brain-bending things to understand about CSS3 Transforms. CSS3 Animation Cheat Sheet - Justin Aguilar. How it works The CSS3 Animation Cheat Sheet is a set of preset, plug-and-play animations for your web projects.