Myo - Gesture control armband by Thalmic Labs. Carbon's new champion: Theorists calculate atom-thick carbyne chains may be strongest material ever. (Phys.org) —Carbyne will be the strongest of a new class of microscopic materials if and when anyone can make it in bulk. 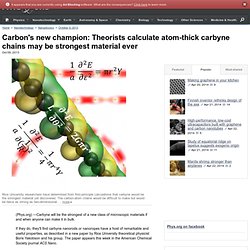 If they do, they'll find carbyne nanorods or nanoropes have a host of remarkable and useful properties, as described in a new paper by Rice University theoretical physicist Boris Yakobson and his group. The paper appears this week in the American Chemical Society journal ACS Nano. Carbyne is a chain of carbon atoms held together by either double or alternating single and triple atomic bonds. DARPA's Wound Stasis Technology Could Save Lives. Invisibility Cloak. (Phys.org) —Researchers have discovered an alternative way to make an invisibility cloak that departs from other attempts to do so. 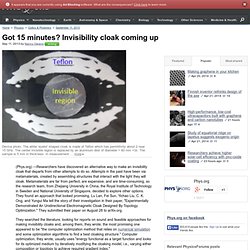 Attempts in the past have been via metamaterials, created by assembling structures that interact with the light they will cloak. Metamaterials are far from perfect, are expensive, and are time-consuming, so the research team, from Zhejiang University in China, the Royal Institute of Technology in Sweden and National University of Singapore, decided to explore other options. They found an approach that looked promising. Suit Control. Graphene electronics. (Phys.org) —Although scientists continue to discover the remarkable electronic properties of nanomaterials such as graphene and transition metal dichalcogenides, the way that electric current flows at this scale is not well understood. 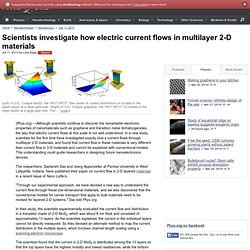 In a new study, scientists for the first time have investigated exactly how a current flows through multilayer 2-D materials, and found that current flow in these materials is very different than current flow in 3-D materials and cannot be explained with conventional models. This understanding could guide researchers in designing future nanoelectronics devices. The researchers, Saptarshi Das and Joerg Appenzeller at Purdue University in West Lafayette, Indiana, have published their paper on current flow in 2-D layered materials in a recent issue of Nano Letters. Switching Configurations. (Phys.org)—Beyond serving as the backbone of modern biology, DNA has come to be a molecule of great interest to engineers. 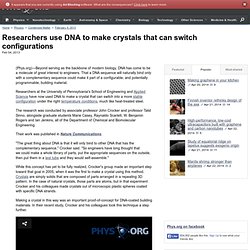 That a DNA sequence will naturally bind only with a complementary sequence could make it part of a configurable, and potentially programmable, building material. Researchers at the University of Pennsylvania's School of Engineering and Applied Science have now used DNA to make a crystal that can switch into a more stable configuration under the right temperature conditions, much like heat-treated steel. The research was conducted by associate professor John Crocker and professor Talid Sinno, alongside graduate students Marie Casey, Raynaldo Scarlett, W. Benjamin Rogers and Ian Jenkins, all of the Department of Chemical and Biomolecular Engineering. Their work was published in Nature Communications. Maximum Strength. Wireless Power. DNA drug delivery. 3D cages made from strands of DNA could be used as a nanotechnology solution for drug delivery. 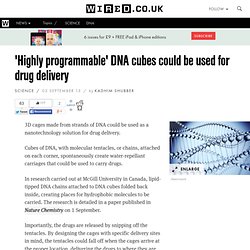 Cubes of DNA, with molecular tentacles, or chains, attached on each corner, spontaneously create water-repellant carriages that could be used to carry drugs. In research carried out at McGill University in Canada, lipid-tipped DNA chains attached to DNA cubes folded back inside, creating places for hydrophobic molecules to be carried. The research is detailed in a paper published in Nature Chemistry on 1 September. Importantly, the drugs are released by snipping off the tentacles. By designing the cages with specific delivery sites in mind, the tentacles could fall off when the cages arrive at the proper location, delivering the drugs to where they are most effective. The potential for DNA cages in drug delivery partly lies in their ability to form a variety of cell-like stable structures.

"[Putting molecules] in a DNA cage is difficult as the pore size is very large," says Sleiman. Invisibility clues. MessageToEagle.com - Researchers studying small creatures and flying insects are often amazed over their capability to perform a great variety of different maneuvers and how they manage to avoid dangers and keep away from areas where they will be highly visible. 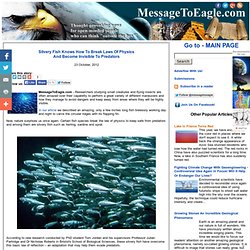 In our article we described an amazing, only a few inches long fish tirelessly working day and night to carve the circular ridges with its flapping fin. Now, nature surprises us once again. Certain fish species break the law of physics to keep safe from predators and among them are silvery fish such as herring, sardine and sprat. Maximum Armor. July 26, 2012 Carbon nanotubes are the strongest and stiffest materials yet discovered, and show promise for everything from safer space-station modules to ballistic underwear and bullet resistant fiberglass panels thinner than a playing card. 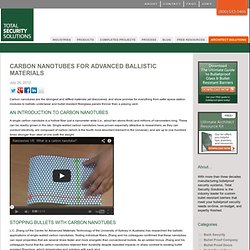 Bulletproof. Could This Be the Next Robotic Skin? Nature often inspires scientists: glass with spiderweb patterns, a mirror-less laser inspired by bird feathers, and boat hull coatings designed after shark skin are but a few examples. 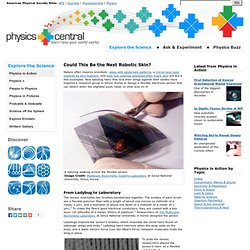 Now ladybug hairs that lock their wings against their bodies have inspired a research group in Seoul, Korea to design a flexible electronic sensor that can detect when the slightest push, twist, or slide acts on it! From Ladybug to Laboratory The sensor resembles two brushes sandwiched together. Optimal Biological Branching. A diagram of the optimal branching structures for systems with fixed "sinks" — nodes where the flow branches further down the path.Image Credit: Dan Hu/David Cai/PRL October 14, 2013 Branching structures crop up in a number of biological applications, such as the veins in leaves that transport water or the veins in our bodies that transport blood. 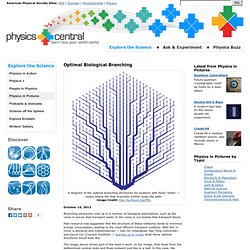 Past research has suggested that the structure of these networks tends to minimize energy consumption, leading to the most efficient transport systems.