Scientists discover how to change human leukemia cells into harmless immune cells. “B-cell leukemia cells are in many ways progenitor cells that are forced to stay in an immature state,” Majeti said. 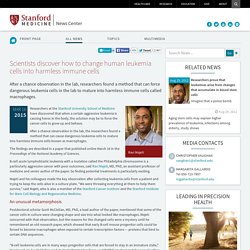 So he, McClellan and student Christopher Dove, an MD/PhD student and the paper’s other lead author, did more experiments and confirmed that methods shown to have altered the fate of the mouse progenitor cells years ago could be used to transform these human cancer cells into macrophages, which can engulf and digest cancer cells and pathogens.

There’s big-time interest in differentiation therapies for cancer. Majeti and his colleagues have some reason to hope that when the cancer cells become macrophages they will not only be neutralized, but may actually assist in fighting the cancer. Like a bloodhound owner who gives the dog a sniff of an object that was associated with the person or animal he wants to track, macrophage cells present recognizable bits of abnormal cells to other immune cells so that they can launch an attack. Low Birth And Death Rates Should Have Killed Natural Selection, But Didn't. ShareTweetShareSendLink Most people think we’ve beaten evolution. 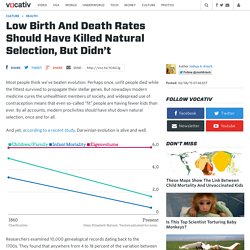 Perhaps once, unfit people died while the fittest survived to propagate their stellar genes. But nowadays modern medicine cures the unhealthiest members of society, and widespread use of contraception means that even so-called “fit” people are having fewer kids than ever. By all accounts, modern proclivities should have shut down natural selection, once and for all. And yet, according to a recent study, Darwinian evolution is alive and well. James Harrison (blood donor) James Harrison, OAM, also known as the Man with the golden arm, is a blood plasma donor[1] from Australia whose unusual plasma composition has been used to make a treatment for Rhesus disease. 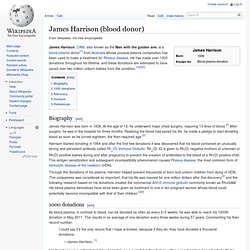 He has made over 1000 donations throughout his lifetime, and these donations are estimated to have saved over two million unborn babies from the condition.[1][2][3] James Harrison was born in 1936. At the age of 13, he underwent major chest surgery, requiring 13 litres of blood.[2] After surgery, he was in the hospital for three months. On the Origin of Circuits. Biggest Virus Yet Found, May Be Fourth Domain of Life? Scientists have found the biggest viruses known, and these pandoraviruses have opened up entirely new questions in science—even suggesting a fourth domain of life, a new study says. 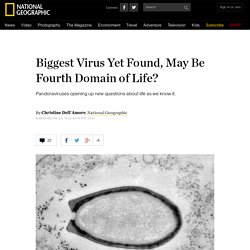 Each about one micron—a thousandth of a millimeter—in length, the newfound genus Pandoravirus dwarfs other viruses, which range in size from about 50 nanometers up to 100 nanometers. A genus is a taxonomic ranking between species and family. In addition to being huge, pandoraviruses have supersize DNA: 2,500 genes as compared with 10 genes in many viruses. The Tibetan Book of the Dead and Near-Death Experiences. How to Take a Detox Bath: 10 Steps. 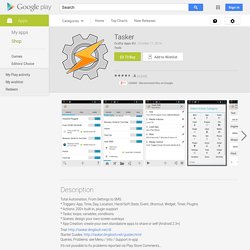 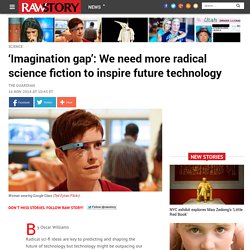 Byrne, creative director at BuzzFeed UK and Hallam, head of social at Mindshare UK, told a Mindshare Huddle that sci-fi had become less imaginative over the past 20 years and they were worried that a fear of the internet and the future of technology could be to blame. The duo pointed to the similarities between 2001: A Space Odyssey’s Hal 9000 and Apple’s Siri, the retinal scanners, touchscreens and insectoid robots featured in Minority Report and the 70 predictions made in 1984 that have now been realised. 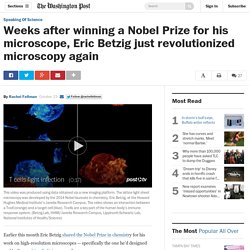 The lattice light sheet microscopy was developed by the 2014 Nobel laureate in chemistry, Eric Betzig, at the Howard Hughes Medical Institute’s Janelia Research Campus. The video shows an interaction between a T-cell (orange) and a target cell (blue). T-cells are a key part of the human body’s immune response system. Relativity of simultaneity. On spaceships, map-clocks may look unsync'ed. 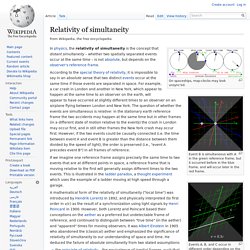 Event B is simultaneous with A in the green reference frame, but it occurred before in the blue frame, and will occur later in the red frame. Events A, B, and C occur in different order depending on the motion of the observer. The white line represents a plane of simultaneity being moved from the past to the future.

3-D-printed bacteria may unlock secrets of diseases. Don't expect to see woolly mammoths walk the earth again anytime soon, but don't write off the mammoth revival project as a Pleistocene pipe dream, either: That's the message from a new TV documentary about efforts to re-create the long-extinct species with genetic trickery. 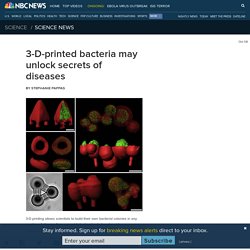 This is how you melt metal with magnets. It takes a lot of heat to melt metal, normally requiring some kind of heavy-duty torch to get the job done manually. 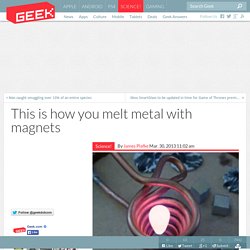 However, with a bit of electricity and wire, you can melt a chunk of metal with a magnetic field, and suspend in it mid-air so it looks cool during the process. The setup is more simple than you likely imagined, as it uses induction heating to melt the metal chunk without having to strap on a visor and break out a blowtorch. In order to make the metal float, it needs to be suspended in the middle of a magnetic field.

So, rather than search online for a very specific magnetic housing, you can simply make one by passing an electric current through a wire. If you twist the wire into a coil, the rig will focus its magnetic field toward the center of the housing. An electric current is bouncing around the coil, and thanks to the metal object, inside the magnetic field. Restoring surgeons’ sense of touch during minimally invasive surgeries. By David Salisbury | Posted on Tuesday, Oct. 15, 2013 — 2:32 PM A small, wireless capsule has been developed that can restore the sense of touch that surgeons are losing as they shift increasingly from open to minimally invasive surgery.

During open surgery, doctors rely on their sense of touch to identify the edges of hidden tumors and to locate hidden blood vessels and other anatomical structures: a procedure they call palpation. But this practice is not possible in minimally invasive surgery where surgeons work with small, specialized tools and miniature cameras that fit through small incisions in a patient’s skin. Palpation capsule allows surgeons to measure tissue stiffness during minimally invasive surgery.