Webpage. A desert is a barren area of land where little precipitation occurs and consequently living conditions are hostile for plant and animal life. 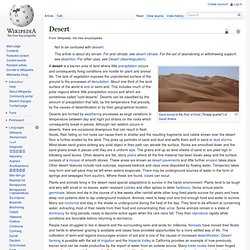 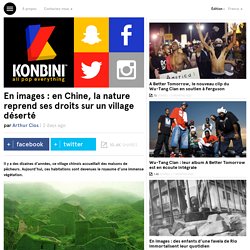 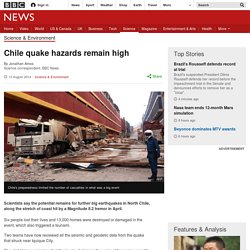 Six people lost their lives and 13,000 homes were destroyed or damaged in the event, which also triggered a tsunami. Two teams have now reviewed all the seismic and geodetic data from the quake that struck near Iquique City. Animals in the Savanna. African rock python African rock python The rock python is Africa’s biggest snake. 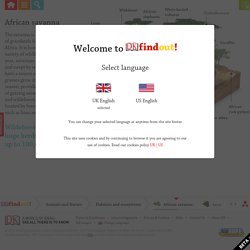 It can grow up to 7m (23ft) in length, and can easily kill and eat a gazelle. How Many Trees Are There? Venezuela’s Hunger Is No Game.

Take A Look At New York's Tiny, Secret Libraries. "The premise of Little Free Library is take-a-book, return-a-book," explains Ian Veidenheimer of The Architectural League of New York, who helped coordinate the project to bring these tiny libraries to New York. 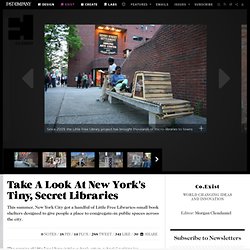 When the project has deployed in other cities, the books are usually guarded by a small "book shelter" in the shape of a bird house, but in New York they gave it a more design-centric treatment. Since 2009, the Little Free Library project has brought thousands of micro-libraries to towns and cities across the world. This summer, New York City institutions PEN World Voices Festival, a celebration of international literature, and The Architectural League of New York (TALNY), a cultural nonprofit, teamed up to activate the project in public spaces across the city. Earth's Relentless Warming Just Hit a Terrible New Threshold. The number of climate records broken in the last few years is stunning. 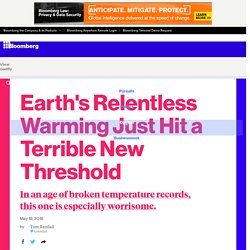 But here's a new measure of misery: Not only did we just experience the hottest April in 137 years of record keeping, but it was the 12th consecutive month to set a new record. It's been relentless. GREEN MAGIC HOMES - The most beautiful Green Homes ever. Can you imagine living under your garden, your flowers, your trees, in a green vibrant living landscape? 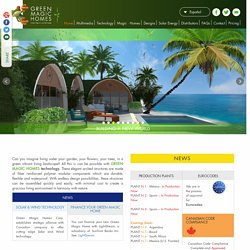 All this is can be possible with GREEN MAGIC HOMES technology. Todd Allison and the Petunia Violet. The Abandoned Fishing Village of Gouqi Island. In the mouth of the Yangtze River off the eastern coast of China, a small island holds a secret haven lost to the forces of time and nature—an abandoned fishing village swallowed by dense layers of ivy slowly creeping over every brick and path. 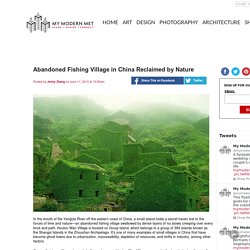 Houtou Wan Village is located on Gouqi Island, which belongs to a group of 394 islands known as the Shengsi Islands in the Zhoushan Archipelago. It's one of many examples of small villages in China that have become ghost towns due to urbanization, inaccessibility, depletion of resources, and shifts in industry, among other factors. Once a thriving settlement merely half a century ago, Houtou Wan Village was gradually deserted when the small bay could no longer meet the needs of the increasing number of fishing boats. 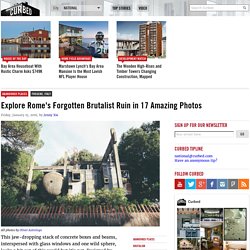 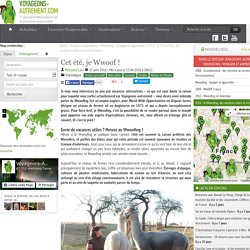 I’ve used my discretion to choose what I think are the most wonderful and amazing hotels- which means that some of the more famous “unusual” hotels are omitted from this list because they are downright ugly and I don’t see why anybody would want to stay in them. 27 Things You Didn't Know You Could Do In Tasmania. H5C4DD.jpg (1920×1200) Paris convention and visitors office - Official website - Paris tourism. Sean Goebel Photography: Timelapse. Six Great Swiss Mountain Escapes. Our picks for mountain villages guaranteed to help you hit the rest button. The Swiss Alps are popular for a lot of reasons, but what about a do-it-yourself modern-day detox? High up in their hills is a network of old villages that harken to the past—tiny communities that move at a slower pace, foster personal relationships (even going so far as to chat up strangers), and—perhaps best of all—are devoid of cars.

Sistine Chapel. Travel Romania - Bran Castle - Dracula's Castle. Bran Castle, situated between the Bucegi and Piatra Craiului Mountains, 30 km far from Brasov, is the only touristic point that attracts hundreds of thousands of tourists because of a legend: Count Dracula’s Legend, although the historical sources state that Vlad Tepes (Vlad the Impaler) dropped by only once, in his way to Brasov. Bran Castle. Initially, the Bran Castle (in Slavic „brana” means „gate”) was a stronghold known as Dietrichstein, built by the Teutonic Knights in 1212, stronghold that was conquered by the Saxons living in Transylvania towards the end of the 13th century. The first documentary attestation dates from 1377, when Ludovic I D’Anjou gave the inhabitants of Brasov the privilege to build the citadel in the place of the old stronghold.

Atlas of True Names. Top 10 Hideaways & Inns - Travel. From the National Geographic book Auberge du Soleil Rutherford, California www.aubergedusoleil.com. Magic Beauty Of Italian Coastal Cities. I think you would not refuse to live in any of these towns in Italy. There’s a calm, picturesque, sunny and these cities are located near the azure sea. Just paradise! Vernazza – one of five localities of the Cinque Terre.

As in most of the national park, in Vernazza prohibited movement of road transport. GREEN FLOAT - a Floating City in the Sky : DigInfo. Too beautiful to be real? 16 surreal landscapes found on Earth. These bizarre locations may seem like a series of elaborate movie sets, but they are real destinations that you might want to see for yourself. Photo: Greg Mote/Flickr The Wave, Arizona, U.S. Photo: Shutterstock Travertines, Pamukkale, Turkey Photo: Shutterstock. This Lake In Tanzania Has A Deadly Secret. These Shocking Photos Show The Haunting Reality. Tanzania’s Lake Natron is one of the most serene lakes in all of Africa, but it’s also the source of some of the most eerie photographs ever captured.

You see, Lake Natron has a very deadly secret, it turns any animal it touches to stone. The 10 Most Beautiful Cities in the World. Ce que voient les drones 1. Top Amiens, France Things to Do on VirtualTourist. Inside New York’s Most Beautiful Subway Station, Abandoned Since 1945. Old City Hall Station (all photos by the author for Hyperallergic) North-end. Кольсайские озера. Отдых, Как доехать, Цены, Экскурсии, Карта. Skellig Michael. Carefree. Wind farm. Visitors agenda. Hertzsprung–Russell diagram. The Global Solution to Extinction. The one major reserve in the United States that has been subjected to a complete census is the Great Smoky Mountains National Park.