Getting Started with Trello. Make Good Art Kinetic Typography. How DANIELS Pitched Their Music Video Idea to Manchester Orchestra. The Evolution of Distribution: A Conversation with Mia Bruno from Seed&Spark. Making a film is one thing. 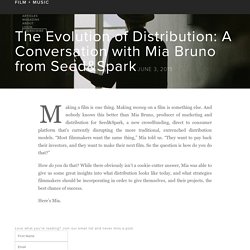 Making money on a film is something else. And nobody knows this better than Mia Bruno, producer of marketing and distribution for Seed&Spark, a new crowdfunding, direct to consumer platform that’s currently disrupting the more traditional, entrenched distribution models. “Most filmmakers want the same thing,” Mia told us. “They want to pay back their investors, and they want to make their next film. So the question is how do you do that?” How Do You Charge For Your Services as a Filmmaker? Free Storyboard Template for Film and Video Projects. Share your creative vision with your crew using this free storyboard template. 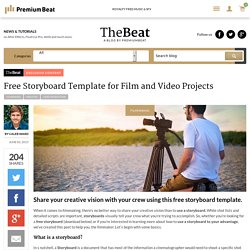 When it comes to filmmaking, there’s no better way to share your creative vision than to use a storyboard. While shot lists and detailed scripts are important, storyboards visually tell your crew what you’re trying to accomplish. So, whether you’re looking for a free storyboard (download below) or if you’re interested in learning more about how to use a storyboard to your advantage, we’ve created this post to help you, the filmmaker. Let’s begin with some basics. 700 Free Movies Online: Great Classics, Indies, Noir, Westerns. 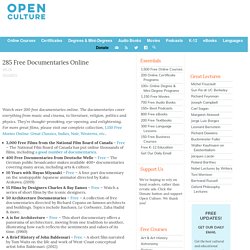 In our last two installments, I covered how to grow word-of-mouth promotion and how to engage fans to ensure success on VOD. Today, let's look at how filmmaker Cheryl Dunn and Alldayeveryday published a universe of content revolving around their film Everybody Street. Everybody Street is a gorgeously shot documentary that tells the story of many of the greatest photographers who've taken to NYC’s streets. Prior to making the feature-length doc, Cheryl Dunn had made a short film on the subject that received so much acclaim, she knew there would be demand for a longer film. Cheryl enlisted Alldayeveryday to help produce and market the film. 1. In the world of Web 2.0, anything you share needs to be highly clickable. You guessed it: the trailer went viral, in part thanks to a popular post on the Kickstarter Tumblr blog.

Watch World of Tomorrow Online Free Putlocker. Soundhunters Home. Pete Docter (Monsters Inc, Up) on the Creative Process Behind Building a Pixar Story. Pete Docter, the Pixar director behind Monsters Inc, Up and the recently released Inside Out, was in talk at TIFF this year, talking about his career, his journey at Pixar, the work-life balance and, of course, the creative process that goes behind a Pixar film. 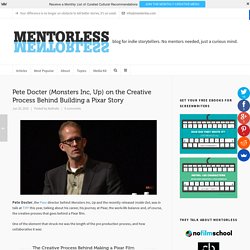 One of the element that struck me was the length of the pre-production process, and how collaborative it was: The Creative Process Behind Making a Pixar Film. YouGov Profiler. 1. 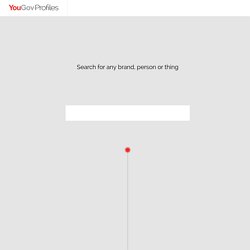 What is YouGov Profiles? This is a free-to-use app to showcase YouGov Profiles, YouGov's new segmentation and media planning tool for agencies and their brands. Subscribers to the professional tool have full access to the YouGov Cube – our connected data vault which holds over 120,000 data points, collected from 190,000 UK YouGov members, updated on a daily basis 365 days a year. It allows you to profile your target audience across all channels, plan creative and design a media strategy for specific campaigns with greater granularity and accuracy than ever before. For more information contact profiles@yougov.com. Tutorial 25: Tracking the Position of a Color in a Movie.

There are many ways to analyze the contents of a matrix. 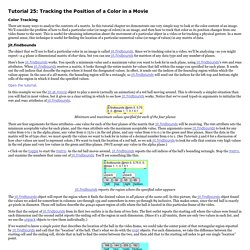 In this tutorial chapter we demonstrate one very simple way to look at the color content of an image. We'll consider the problem of how to find a particular color (or range of colors) in an image, and then how to track that color as its position changes from one video frame to the next. This is useful for obtaining information about the movement of a particular object in a video or for tracking a physical gesture. In a more general sense, this technique is useful for finding the location of a particular numerical value (or range of values) in any matrix of data. The object that we'll use to find a particular color in an image is called jit.findbounds. Here's how jit.findbounds works.

In this example we use the jit.qt.movie object to play a movie (actually an animation) of a red ball moving around. Minimum and maximum values specified for each of the four planes • Click on the toggle to start the metro. Playing Notes Playing Tones. Research Center. Ototo + 7 Sensors — Ototo - Make Music From Anything. Build a piano out of vegetables, make a plant sing or create a keyboard from aluminum foil. 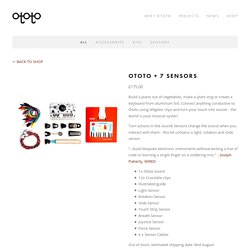 Connect anything conductive to Ototo using alligator clips and turn your touch into sound – the world is your musical oyster! Turn actions in the sound! KIDDIEPUNK - CONTACT & STORE INFO. Citadel (2012) Anthony "Shake" Shakir a.k.a. Da Sampla. Acid Machine Beta. Andrei Tarkovsky and the Art of Creating What You Mean. Once again adapting his narrative to his subject, Kogonada offers a poetic and hypnotic video essay on Andrei Tarkovsky with Auteur in Space. 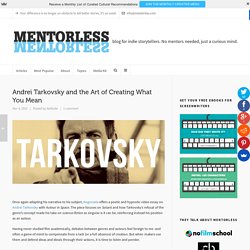 Nelson was a choreographer and together, she and Haack collaborated on eleven fairly avant-garde records for kids (released on their own Dimension 5 label) that combined electronic music, storytelling and a (drugless?) Psychedelic outlook. The liner notes to Haack and Nelson’s 1963 Dance Sing and Listen Again album read: THIS RECORDING IS A TOTAL EXPERIENCE. BBC Radio 4 - Archive on 4, Sculptress of Sound: The Lost Works of Delia Derbyshire. Millerpeterson/phi-launchpad-max. Don hertzfeldt.