Here's What Real Healthy People Actually Snack On. A Sandwich a Day: Two New Vietnamese Sandwiches in Morningside Heights. In this great city of ours, one could eat a different sandwich every day of the year—so that's what we'll do. 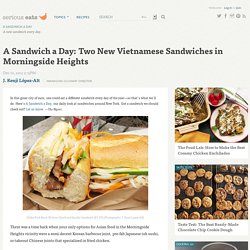 Here's A Sandwich a Day, our daily look at sandwiches around New York. Got a sandwich we should check out? Let us know. —The Mgmt. Grilled Pork Banh Mi from Quick and Quality Sandwich ($5.95) [Photographs: J. There was a time back when your only options for Asian food in the Morningside Heights vicinity were a semi-decent Korean barbecue joint, pre-fab Japanese-ish sushi, or takeout Chinese joints that specialized in fried chicken. Things have improved massively since then. I decided to hop on my bike and check them out in a head-to-head sandwich-off. Cold Cut and Minced Pork Banh Mi from Quick and Quality Sandwich ($5.95) The fillings at Quick & Quality are comparable to the better of the banh mi shops downtown, with fresh-tasting cold cuts and pork that had the texture and flavor or real pork, not random mystery meat.

Smoke Jazz & Supper Club. Restaurant Week Guests who are looking to dine with us on Friday nights during NYC’s restaurant week need to purchase tickets for the show in addition to their restaurant week reservation. 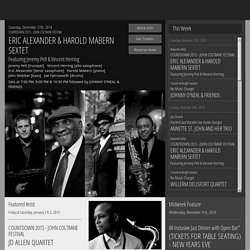 We highly recommend that you purchase your tickets in advance. Please see the event page for applicable music charge policies as weekend shows at Smoke are always subject to a music charge. Groups of five or more Sunday–Thursday parties of five or more require a credit card to make reservations. On Fridays & Saturdays (and all other special events subject to admission fees) parties of five or more must purchase tickets by going to the tickets page and using instantseats.com. How To Store Your Groceries. 27 Of The Most Delicious Things You Can Do To Vegetables.

31 Grilled Cheeses That Are Better Than A Boyfriend.

Beer Menus - Find Great Beer. 18 Easy And Inexpensive Desserts You Can Make With Puff Pastry. The Mason Jar Blender Trick: Do You Know About This? — Tips from The Kitchn. Basic Beer-Can Chicken. This is the basic recipe for beer-can chicken whose origin has as man stories as there are grill cooks. 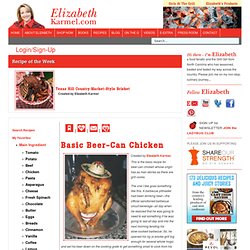 The one I like goes something like this. A barbecue pitmaster had been drinking beer—the official sanctioned barbecue circuit beverage--all day when he realized that he was going to need to eat something if he was going to last all day and into the next morning tending his slow-cooked barbecue. So, he opened his rig (a smoke-grill big enough for several whole hogs) and set his beer down on the cooking grate to get something small to cook from his cooler. He picked up a chicken and put it on top of his half-full can without noticing what he was doing. He looked for his beer, couldn’t find it and popped open another one without a second thought. Methods/steps Grilling Method: Indirect/Medium Heat Remove neck and giblets and pat dry chicken with paper towels.

Open beer can, pour out about ¼ cup of the beer and make an extra hole in top of the can with church key can opener. Soft pretzel buns and knots. Guess what we’re making this weekend? 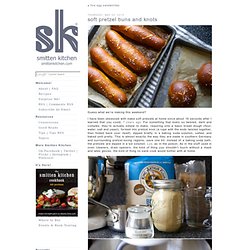 I have been obsessed with make soft pretzels at home since about 16 seconds after I learned that you could, 7 years ago. For something that looks so twisted, dark and complex, they’re actually simple to make, requiring only a basic bread dough (flour, water, salt and yeast), formed into pretzel knot (a rope with the ends twisted together, then folded back over itself), dipped briefly in a baking soda solution, salted, and baked until pretty. This is almost exactly the way they are made in southern Germany and surrounding pretzel-loving regions, save one bit: instead of a baking soda bath, the pretzels are dipped in a lye solution.

Lye, as in the poison. As in the stuff used in oven cleaners, drain openers, the kind of thing you shouldn’t touch without a mask and latex gloves, the kind of thing no sane cook would bother with at home. Or so this was the case nearly a decade ago. Which is to say, I have good news and bad today. 20 Foolproof Hacks For Throwing The Perfect Dinner Party. 34 Creative Kitchen Hacks That Every Cook Should Know. 27 Clever New Ways To Use Your Kitchen Appliances. Ale to the Chief: White House Beer Recipe. Sam Kass September 01, 2012 01:30 PM EDT Ed. 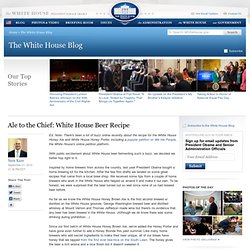 Related:  31 Grilled Cheeses That Are Better Than A Boyfriend   -  30 Foods You'll Never Have To Buy Again   -  Education   -  Enterprise