The Unintended Twist of Tax Inversions. Photo ’s unsolicited $40 billion bid for the drug maker and Mylan’s own unsolicited offer for the rival Perrigo are sweet revenge for the United States taxpayer. 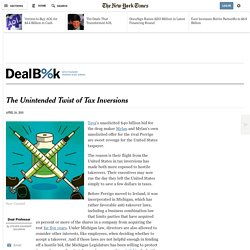 The reason is their flight from the United States in tax inversions has made both more exposed to hostile takeovers. Their executives may now rue the day they left the United States simply to save a few dollars in taxes. Perhaps more important for Perrigo, as a United States company it had a couple of defensive advantages. The Unintended Twist of Tax Inversions. Putin: Russia can influence E.Ukraine, but it's up to Kiev to solve crisis — RT News. Merkel Raps Putin Over Ukraine Conflict During Visit to Moscow. Ukraine conflict: Why is violence surging? Pro-Russian rebels have entered the strategic town of Debaltseve in eastern Ukraine after heavy fighting - despite a ceasefire agreement. 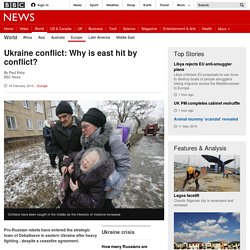 Most of the Ukrainian government forces have pulled out of the town, a key transport hub. A new truce deal was reached on 12 February through international mediation, in an attempt to stop the fighting spiralling out of control. What prompted the flare-up in a conflict that has cost more than 5,600 lives and few saw coming? How did eastern Ukraine return to full-scale conflict? Ukraine ceasefire agreed at Belarus talks. The leaders of Russia, Ukraine, France and Germany have reached a ceasefire deal after 17 hours of talks in Minsk, Belarus, on the Ukrainian conflict. 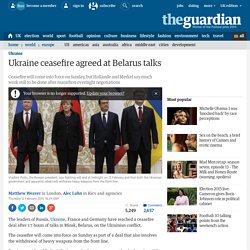 The ceasefire will come into force on Sunday as part of a deal that also involves the withdrawal of heavy weapons from the front line. Russian president Vladimir Putin was the first to announce the deal, saying: “We have agreed on a ceasefire from midnight 15 February.” Putin added: “There is also the political settlement. The first thing is constitutional reform that should take into consideration the legitimate rights of people who live in Donbass. There are also border issues. Market Fundamentalism: A review of Joseph Stiglitz's Globalization and Its Discontents - Council on Foreign Relations.

Economists are the oracles of our age, bestowing their wisdom on a world confronted with the dizzying choices of globalization. 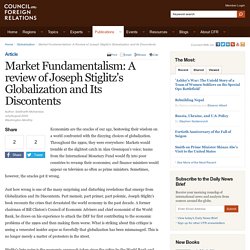 Throughout the 1990s, they were everywhere: Markets would tremble at the slightest catch in Alan Greenspan's voice; teams from the International Monetary Fund would fly into poor countries to revamp their economies; and finance ministers would appear on television as often as prime ministers. Sometimes, however, the oracles got it wrong.

Just how wrong is one of the many surprising and disturbing revelations that emerge from Globalization and Its Discontents. Our Story. Foreign Couples Heading to America for Surrogate Pregnancies. Photo. 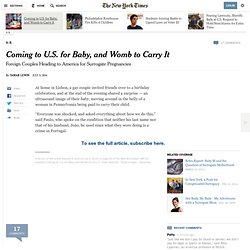 An entire island nation is preparing to evacuate to Fiji before they sink into the Pacific - Quartz. This has to be the weirdest business deal of the week: The Church of England just sold a chunk of forest-covered land on the Fijian island Vanau Levu for $8.8 million to the government of the Pacific island nation of Kiribati. 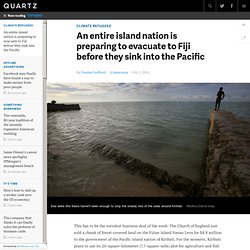 For the moment, Kiribati plans to use its 20-square-kilometer (7.7-square-mile) plot for agriculture and fish farming. But the investment is really a fallback for its 103,000 residents—a place to live if they must leave their home island. Report: Slavery traps nearly 30 million people worldwide. Slavery remains a serious global problem, with 29.6 million people in various states of forced servitude, including sexual exploitation, debt bondage and forced marriage, according to a new report. Mauritania and Haiti have the highest proportions of slaves, while India, Pakistan and China have some of the highest absolute numbers, the Walk Free Foundation said in its first Global Slavery Index report, published Wednesday.

The forms of bondage violate international decrees, including the 1926 Slavery Convention, an international treaty, and the UN Trafficking Protocol. Native-born slaves are often found in poorer countries, while exploited workers from poorer parts of the world regularly end up in rich countries where they are often trafficked. Supreme Court ruling shields corporations from accountability. Eduardo Di Baia/AP Less than a year after the United States Supreme Court ruling in Kiobel v. 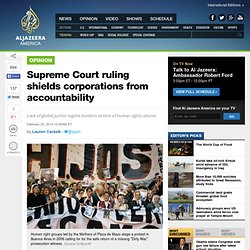 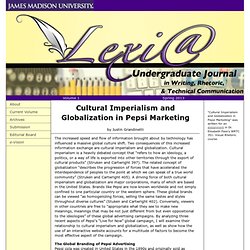 Limited Edition can for Pepsi “Live for Now” campaign, Pepsi Corporation These three aspects of Pepsi’s “Live for Now” campaign attempt to brand Pepsi as youthful, exciting, and synonymous with entertainment and music icons. This style choice is made in order to create a focused global image for Pepsi products. Paul Romer: Why the world needs charter cities. Adam Smith vs. Keynes and Minsky. Once again, it is Adam Smith versus John Maynard Keynes and Hyman Minsky in the financial marketplace. 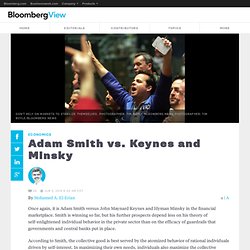 Smith is winning so far, but his further prospects depend less on his theory of self-enlightened individual behavior in the private sector than on the efficacy of guardrails that governments and central banks put in place. Mediamoguls.jpg (1200×849) Merchants Of Cool. Media Conglomerates, Mergers, Concentration of Ownership. Media-Consolidation.png (614×627) Www.motherjones.com/files/legacy/news/feature/2007/03/and_then_there_were_eight.pdf. Comcast-Time Warner Cable's Jolt to Big Media.

When Time Warner and AOL announced the consummation of their private courtship in 2000, cable pioneer Ted Turner enthused that the deal felt “better than sex.” 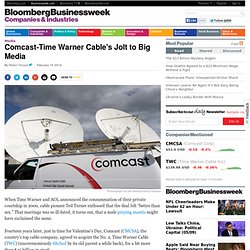 Pfizer Fights Backlash From U.K, U.S. on AstraZeneca Bid. Pfizer Inc. (PFE)’s record of job cuts after acquisitions is now drawing heat from both sides of the Atlantic. Why the Russian sanctions don’t work. Why did the U.S. and European sanctions against Russia earlier this week trigger a rebound in the ruble and the Moscow stock market? To understand this paradox it is worth recalling Yes Minister, the British TV comedy about a blundering politician who stumbles from crisis to crisis with the same justification for every panic response: “Something must be done. This is something –– therefore it must be done.”

The problem with this syllogism is that doing something may be worse than doing nothing — and the Western decision to rely on economic sanctions in the Ukraine crisis is a case in point. The obvious objection is that economic gestures from the United States and Europe have proved pathetically ineffectual in deterring Russia and only emphasizes the West’s lack of conviction and planning. James M. Lindsay: What U.S. Sanctions Against Russia Will (Really) Do. Author: James M. Lindsay, Senior Vice President, Director of Studies, and Maurice R. Greenberg Chair March 21, 2014 Fortune.com In a move to punish Russia's hostile takeover of Crimea, the White House on Thursday announced a second round of sanctions against 20 Russians and a St. Petersburg bank.

This builds on asset freezes and visa bans President Obama ordered Monday against 11 Russian and Ukraine officials, which some didn't take very seriously, especially Russian Deputy Prime Minister Dmitry Rogozin, one of the officials targeted. At least publicly, U.S. officials say the sanctions are meant to force Russia to return Crimea to Ukraine. Instead, U.S. sanctions will seek to accomplish less ambitious (but more realistic) goals: For one, such measures could deter Russia from encroaching further into Ukraine. All this depends on whether President Obama masters four critical tasks: Get all of Europe on board.

Timeline: Ukraine's political crisis - Europe. ‘Not easy to impose sanctions on Russia due to the interdependency of economies’ — RT Op-Edge. Published time: March 18, 2014 14:12. Is not available. Follow the Money. A Case for Rejecting Pfizer's Bid for AstraZeneca. Oli Scarff/Getty Images Bill George is professor of management practice at Harvard Business School, former chairman and chief executive of Medtronic and author of “True North,” a book about authentic leadership. Wonkbook: The economics of the new Russia sanctions. Obama sanctions Putin’s cronies: Will economic sanctions stop Russia from invading Ukraine? Photo by Ria Novosti/Reuters On Monday, the Obama White House dropped another round of sanctions on some of Russian President Vladimir Putin’s cronies, but it’s not clear if this will affect Putin’s policies toward Ukraine.