Picturing the Great Migration. In 1993, seven years before his death, at the age of eighty-two, Jacob Lawrence recast the title and most of the captions of a stunning suite of sixty small paintings that he had made in 1941. 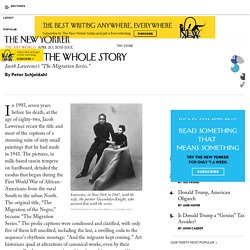 The pictures, in milk-based casein tempera on hardboard, detailed the exodus that began during the First World War of African-Americans from the rural South to the urban North. The original title, “The Migration of the Negro,” became “The Migration Series.” The prolix captions were condensed and clarified, with only five of them left unedited, including the last, a swelling coda to the sequence’s rhythmic montage: “And the migrants kept coming.” Art historians quail at alterations of canonical works, even by their creators. But Lawrence wasn’t working for art history, even if he was making it. Lawrence was working in a studio with neither heat nor running water in Harlem when he created “Migration” in a rush of inspiration, following months of painstaking research.

Two impressions stand out. Notes on the Ethnic Image in Ashcan School Paintings. During the first decades of the twentieth century, Robert Henri and his circle of Ashcan realists became known for their crusading efforts to reconnect art and life. 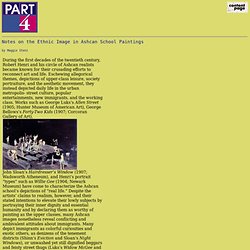 Ashcan School. The Ashcan School, also called the Ash Can School, was an artistic movement in the United States during the early twentieth century that is best known for works portraying scenes of daily life in New York, often in the city's poorer neighborhoods. 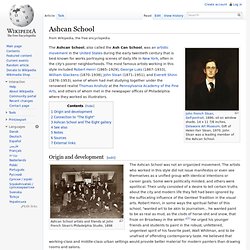 The most famous artists working in this style included Robert Henri (1865–1929), George Luks (1867–1933), William Glackens (1870–1938), John Sloan (1871–1951), and Everett Shinn (1876–1953), some of whom had met studying together under the renowned realist Thomas Anshutz at the Pennsylvania Academy of the Fine Arts, and others of whom met in the newspaper offices of Philadelphia where they worked as illustrators. Origin and development[edit] Ashcan School artists and friends at John French Sloan's Philadelphia Studio, 1898 The Ashcan School was not an organized movement. The artists who worked in this style did not issue manifestos or even see themselves as a unified group with identical intentions or career goals. 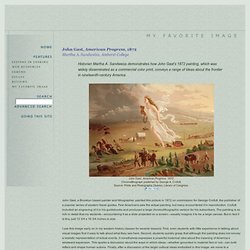 Sandweiss, Amherst College Historian Martha A. Sandweiss demonstrates how John Gast's 1872 painting, which was widely disseminated as a commercial color print, conveys a range of ideas about the frontier in nineteenth-century America. John Gast, American Progress, 1872. John Gast, a Brooklyn based painter and lithographer, painted this picture in 1872 on commission for George Crofutt, the publisher of a popular series of western travel guides. I use this image early on in my western history classes for several reasons. Understanding Formal Analysis. The elements of art are components or parts of a work of art that can be isolated and defined. 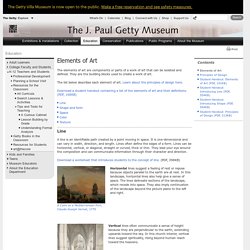 They are the building blocks used to create a work of art. The list below describes each element of art. Learn about the principles of design here. Download a student handout containing a list of the elements of art and their definitions. (PDF, 168KB) Line A line is an identifiable path created by a point moving in space. Horizontal lines suggest a feeling of rest or repose because objects parallel to the earth are at rest. Vertical lines often communicate a sense of height because they are perpendicular to the earth, extending upwards toward the sky.

Horizontal and vertical lines used in combination communicate stability and solidity. Diagonal lines convey a feeling of movement. The curve of a line can convey energy. Shape and form Shape and form define objects in space. Shape has only height and width. Form has depth as well as width and height. Space Real space is three-dimensional. Color Texture.