#EachForEqual: 10 Empowering Feminist Quotes To Mark International Women's Day. While the road to gender equality is still being paved, women around the world stand united against inequality, whether in the workplace or at home. 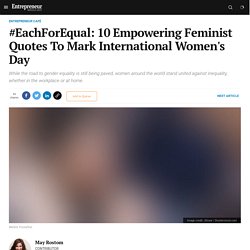 March 8, 2020 3 min read Opinions expressed by Entrepreneur contributors are their own. You're reading Entrepreneur Middle East, an international franchise of Entrepreneur Media. Feminism, while still one of the the most frowned upon F-words on the internet today, has come a long way since its inception. While the road to gender equality is still being paved, women around the world stand united against inequality, whether in the workplace or at home. International Women's Day News & Topics - Entrepreneur. Netflix And UN Women Launch ‘Because She Watched’ Collection This International Women’s Day 2020.

It’s International Women’s Day today March 8 and to celebrate Netflix has collaborated with UN Women to launch “Because She Watched,” a special collection of films, series and documentaries. 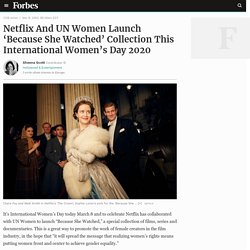 This is a great way to promote the work of female creators in the film industry, in the hope that “it will spread the message that realizing women’s rights means putting women front and center to achieve gender equality.” From peer to maternity - Why the pay gap in Germany is so large. “REVOLUTIONARY” IS not a word that often escapes Angela Merkel’s lips. 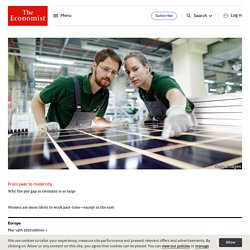 Yet on March 8th, international women’s day, that was how Germany’s chancellor described the change she had observed in men’s attitudes to balancing work and family. This matters in a country that can still deride Rabenmütter (“Raven mothers”), women who supposedly neglect children for career. International Women's Day Facts. Every year on April 1, when jokesters pull out their best pranks and hoaxes, you may have asked yourself: How did this weird tradition start, anyway? 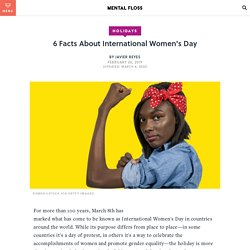 The answer is ... no one really knows. In fact, the origins of April Fools’ Day have long been caught up in myth and legend. The Many Origins of April Fools' Day Some have taken the origin back to Noah sending out the dove before the flood was over, or the Roman festival Saturnalia. One popular 19th-century hypothesis traces it to the French term poisson d’avril, literally meaning “fish of April” but figuratively meaning April Fools. Then, in 1983, an intrepid AP reporter interviewed a professor at Boston University about the history of the day. According to the professor, Constantine was told by his court jesters that they would make better rulers than him, and rather than immediately feeding everyone to the lions, Constantine allowed his jesters to rule for a day. Daniela Moreira: I'm Always Trying To Make Things Better. 5 Steps To Turn Passion Into Profit. In Oprah Winfrey’s words, “Passion is energy. 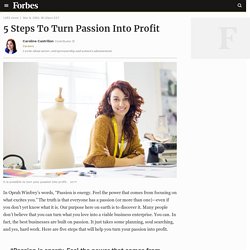 Feel the power that comes from focusing on what excites you.” The truth is that everyone has a passion (or more than one)—even if you don’t yet know what it is. Our purpose here on earth is to discover it. Many people don’t believe that you can turn what you love into a viable business enterprise. You can. “Passion is energy. 1.) Trying to turn passion into profit is inherently risky. 2019 G&WS: Clarissa Cortland Flash Talk: “Stereotype Threat’s Silver Lining" Ladies: You’re Never Going To Achieve Work-Life Balance—It’s All A Sham. Currently women make up almost half of the workforce, with that number expected to decline in upcoming years. 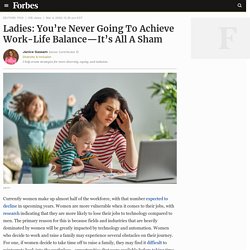 Women are more vulnerable when it comes to their jobs, with research indicating that they are more likely to lose their jobs to technology compared to men. The primary reason for this is because fields and industries that are heavily dominated by women will be greatly impacted by technology and automation. Women who decide to work and raise a family may experience several obstacles on their journey. For one, if women decide to take time off to raise a family, they may find it difficult to reintegrate back into the workplace—opportunities that were available before taking time off may vanish upon a woman’s return. Working mothers may experience the motherhood penalty, where they are discriminated against simply based on the fact that they are mothers. The girl who asked questions - Katherine Johnson died on February 24th. AS SHE RAN her eyes over the flight-test calculation sheets the engineer had given her, Katherine Goble (as she then was) could see there was something wrong with them. 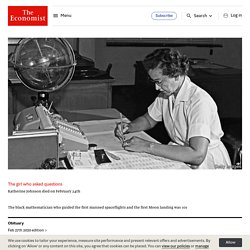 The engineer had made an error with a square root. And it was going to be tricky to tell him so. It was her first day on this assignment, when she and another girl had been picked out of the computing pool at the Langley aeronautical laboratory, later part of NASA, to help the all-male Flight Research Unit. Thermax's Anu Aga: Separating the Roles of Executives and Board Members. 5 Ways That Travel Empowers Women. Travel is transformative and changes us in many ways. 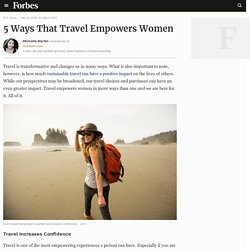 What is also important to note, however, is how much sustainable travel can have a positive impact on the lives of others. While our perspectives may be broadened, our travel choices and purchases can have an even greater impact. Why Women Don’t Delegate As Much As Men. 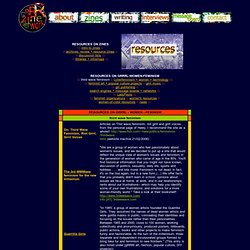 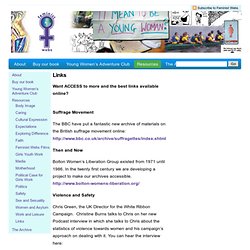 Suffrage Movement The BBC have put a fantastic new archive of materials on the British suffrage movement online: Then and Now. When Women or Minorities Check in as CEOs, White Men Check out. Introducing Forbes 50 Over 50: Highlighting Women Shattering Age And Gender Norms. Cholera is on the rise in the Democratic Republic of the Congo. Here’s how you can help UNICEF protect the lives of children at risk.

Soccer Federation, with previously unpublished depositions along with collective bargaining agreements of the men’s and women’s teams appearing in a Thursday court filing. The Best Podcasts For Female Entrepreneurs. Being a female entrepreneur can be both daunting and exhilarating. We can go from feeling on top of the world after a successful meeting to feeling panicked and overwhelmed when a client sale falls through. Whatever stage your business is at and however you might be feeling about it, having a strong team around you that helps you stay aligned with your vision and motivated to make consistent progress is vital.

Securing effective mentors is necessary for business success—so much so that, according to this Forbes article, founders are three times more likely to become highly successful if they themselves are mentored by a top-performing entrepreneur. There’s Still A $189 Billion Gender Gap In Startup Funding—But Efforts To Move The Needle Are Stronger Than Ever. Female-owned businesses are having a breakthrough: A historic 21 women-led companies, including Guild Education, Rent The Runway and Tala, were unicorns in 2019, earning valuations of $1 billion or more—the highest-ever in a one-year period, and businesses founded by women are delivering higher revenue than male-founded businesses. Yet female-founded companies continue to receive less funding at all rounds, according to new data by Crunchbase.

The report found that while male-only founders raised $195 billion in 2019, female-only founded companies raised just $6 billion. Female founders with a male cofounder were at a much higher advantage: They raised $20.9 billion in 2019. The silver lining? Female founders are receiving more funding across almost every funding stage, gaining the most progress at the seed level, the first funding step in a startup’s journey. Inside Serena Williams’ Plan To Ace Venture Investing. On Serena Williams’ calendar—which is to calendars what Jackson Pollock paintings are to art—Saturdays are designated family time. The Saturday I’m with her in Rome (she was in New York earlier in the week and will be in Paris the following one) carries extra significance. Exactly four years ago, in exactly that Eternal City, she met her husband, Alexis Ohanian, cofounder of online community Reddit.

The two celebrate, in part, with the kind of outing anyone who’s not the most famous woman athlete in the world takes for granted: a stroll in a hotel garden with their joint venture, 22-month-old Olympia, in tow. It’s more romantic than it sounds: The Rome Cavalieri goes so far as to call its 15-acre garden a “private park,” littered with marble and bronze, lions and unicorns. The regal surroundings befit a historic figure of American sport, who has 23 Grand Slam titles and has blown away any number of barriers and stereotypes. Daily chart - Iceland leads the way to women’s equality in the workplace. IN 1920 America granted women the constitutional right to vote. A century on, women still face frustrating barriers to equality. To mark International Women’s Day on March 8th, The Economist has updated its glass-ceiling index, which ranks 29 countries on ten indicators of equality for women in the workplace: educational attainment, labour-force participation, pay, child-care costs, maternity and paternity rights, business-school applications, and representation in senior jobs (in management positions, on company boards and in parliament).

This year Iceland tops our ranking, overtaking both Norway and Sweden. Like its Nordic neighbours, Iceland is particularly good at helping women excel in the classroom (more than half earn a university degree) and guaranteeing access to corporate boards (women hold nearly half of the country’s board seats, thanks to a mandatory quota of 40% which came into effect in 2013). At the bottom of our ranking is South Korea, with Japan not far above. NYU Preshow 2019: Beespect.