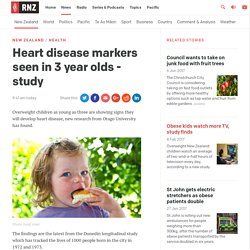 Photo: food, child The findings are the latest from the Dunedin longitudinal study which has tracked the lives of 1000 people born in the city in 1972 and 1973. Health outlook for obese children grim - researcher. Three quarters of obese children are at greater risk of long-term heart disease, a new study shows. 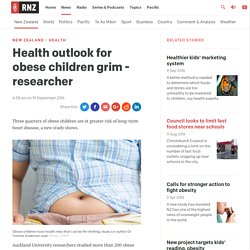 Obese children have health risks that can be life-limiting, study co-author Dr Yvonne Anderson said. Photo: 123RF Auckland University researchers studied more than 200 obese children between the ages of four and 16 and found 40 percent showed signs of being at high risk for Type 2 diabetes. The study found 75 percent showed signs of inflammation, increasing the risk of heart disease, 47 percent had at least one abnormal liver function test, while half snore four or more times a week - one of the symptoms suggestive of obstructive sleep apnoea.

Busting the fat myths: How new research will revolutionise Māori and Pacific health. Bigger not fatter Another variant, known as CREBRF, which is found in about 30% of Māori and Pacific people but not in Europeans, is associated with higher BMI – usually a measure of obesity and associated ill-health. 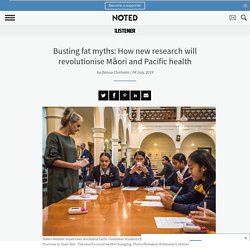 However, the variant is remarkably protective against diabetes, and recent unpublished research from the MWC indicates that the higher BMI is the result of more muscle, not fat. 'It has occurred across the country': NZ's preschool obesity rates are unique worldwide. Obesity linked to cycle of poverty. Last updated 05:00, February 24 2015 Obese people are more likely to be stuck in a "vicious cycle" of poverty because they perform poorly in school and miss out on jobs, researchers say. 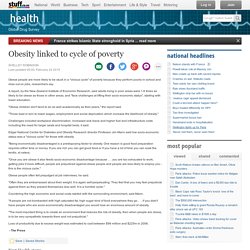 A report, by the New Zealand Institute of Economic Research, said adults living in poor areas were 1.6 times as likely to be obese as those in other areas, and "face challenges at lifting their socio-economic status", starting with lower education. "Obese children don't tend to do as well academically as their peers," the report said. "Those lead in turn to lower wages, employment and social deprivation which increase the likelihood of obesity. " Education not poverty behind kids' obesity. Last updated 05:00, October 12 2015 Childhood obesity looks to be driven more by mums' and dads' level of education not how much money they have. 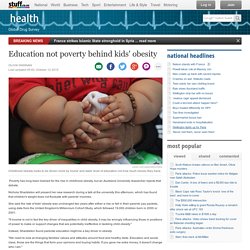 Poverty has long been blamed for the rise in childhood obesity, but an Auckland University researcher rejects that debate. Nichola Shackleton will present her new research during a talk at the university this afternoon, which has found that children's weight does not fluctuate with parents' incomes. Obesity epidemic at 'crisis' point. Last updated 05:00 09/06/2014 ROSS GIBLIN/Fairfax NZ FIGHTING THE FAMILY CURSE: Lloma Nicholas and daughters Jody, 12, left, and Charlotte, 14, are tackling obesity by taking part in the Active Families programme. 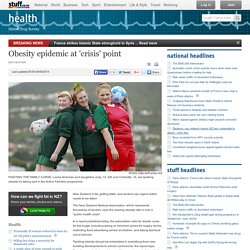 Obesity. Most recent dataThe graphs below are interactive. 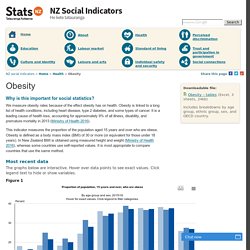 Hover over data points to see exact values. Click legend text to hide or show variables.Figure 1 See information about this data.Figure 2See information about this data.Figure 3Note: Chile, Hungary, and Poland are as at 2009. The Czech Republic is at 2010. Environmental obesity, Profiles, University of Otago, New Zealand. Dr Louise Signal (centre) with students Moira Smith and Mat Walton "Over the last four years we've investigated whether or not our children live in an 'obesogenic' environment. 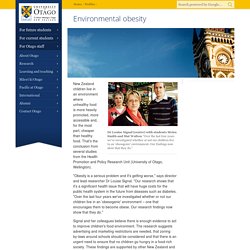 Our findings now show that they do. " New Zealand children live in an environment where unhealthy food is more heavily promoted, more accessible and, for the most part, cheaper than healthy food. That's the conclusion from several studies from the Health Promotion and Policy Research Unit (University of Otago, Wellington). "Obesity is a serious problem and it's getting worse," says director and lead researcher Dr Louise Signal. "Our research shows that it's a significant health issue that will have huge costs for the public health system in the future from diseases such as diabetes. Signal and her colleagues believe there is enough evidence to act to improve children's food environment. On the same channels only five per cent of advertisements favour improved nutrition. 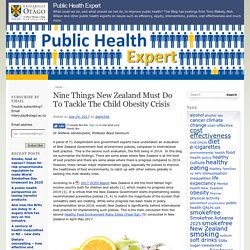 This is the second such evaluation, the first being in 2014. In this blog we summarise the findings. There are some areas where New Zealand is at the level of best practice and there are some areas where there is progress compared to 2014. However, there remain major implementation gaps, especially for policies to improve the healthiness of food environments, to catch up with other nations globally in tackling the child obesity crisis. New Zealand battles obesity epidemic as third fattest country in the world. Weighing in at over 120kg Neil Coleman’s goal to retire and enjoy travelling around New Zealand was unlikely. 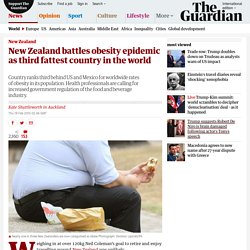 The long-term foodie, school counsellor and writer was only in his early 60s but suffered from diabetes, high blood pressure, sleep apnoea and relied on a continuous positive airways pressure machine to keep breathing. “The doctor was clear, he told me I would not be collecting my pension at 65,” he said. Coleman decided to take drastic measures. He underwent a gastric bypass which he paid NZ$18,000 for because he didn’t qualify for state help. Two years later, as he prepares to retire, he weighs about 77kg. But this is not the case for a growing proportion of his country. Fight the Obesity Epidemic » Health risks. Obesity leads to very serious health problems, on a par with smoking. It substantially reduces life expectancy. New Zealand food policies need to change to tackle obesity.

New Zealand's food policies need major improvement in order to see any change to the country's obesity epidemic, a new report says. The second Auckland University Health Food Environment Policy Index, published today, saw the country score poorly on about half of the food policy indicators used to measure the policy changes needed to tackle the problem. The 2017 report asked a panel of 71 independent and government public health experts to rate the extent of implementation of Government policies on food environments and infrastructure against international best practice. The first version was published in 2014. New Zealand retains bronze in OECD obesity stakes. Last updated 13:39, October 12 2017 A new OECD report has revealed New Zealand's obesity rates are worsening. New Zealand is fat and getting fatter – officially.

A new OECD "obesity update" shows that nearly one-in-three Kiwis is obese and the only fatter nations are the United States and Mexico. New Zealand has been in third place since at least 2007, but then 26.5 per cent of adults were obese. Ministry of Health NZ.