Ditcted2012d3 en. YouTube. FALSE ALARM: Why Almost Everything We’ve Been Told About Global Warming is Misleading, Exaggerated, or Plain Wrong. How To Win Every Argument. How to Never Get Angry: 3 New Secrets From Neuroscience. Dogs give food to their 'friends' in first-of-its-kind study. Voluntary acts of kindness and positive outward gestures without thought of reward are two of the more redeeming aspects of human society, but to what extent do these prosocial behaviours exist in other animals? 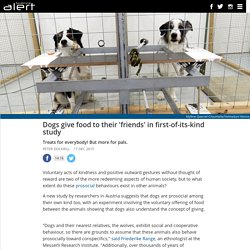 A new study by researchers in Austria suggests that dogs are prosocial among their own kind too, with an experiment involving the voluntary offering of food between the animals showing that dogs also understand the concept of giving. "Dogs and their nearest relatives, the wolves, exhibit social and cooperative behaviour, so there are grounds to assume that these animals also behave prosocially toward conspecifics," said Friederike Range, an ethnologist at the Messerli Research Institute. "Additionally, over thousands of years of domestication, dogs were selected for special social skills. " But measuring prosocial behaviour in dogs isn't easy, says Range, because they're so very social with humans. Santa and the ‘Shrooms: The Real Story Behind the “Design” of Christmas. Most people think of Santa Claus and the cheery red and white we decorate with at Christmas as little more than lighthearted fun and pretty colors. 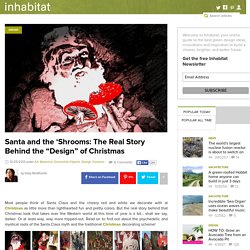 But the real story behind that Christmas look that takes over the Western world at this time of year is a bit… shall we say, darker. What You Lose When You Sign That Organ-Donor Card. Corrections & Amplifications The article below quotes Robert Truog, professor of medical ethics, anesthesia and pediatrics at Harvard Medical School, about the possible pain felt by an organ donor who has been declared brain dead. 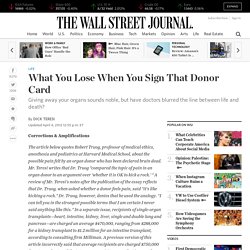 Mr. Teresi writes that Dr. Just Watch These 10 TED Talks. The Real Reason America Used Nuclear Weapons Against Japan. It Was Not To End the War Or Save Lives. Like all Americans, I was taught that the U.S. dropped nuclear bombs on Hiroshima and Nagasaki in order to end WWII and save both American and Japanese lives. 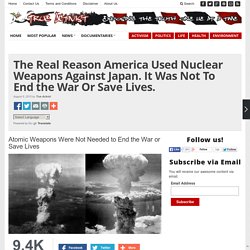 But most of the top American military officials at the time said otherwise. The U.S. Strategic Bombing Survey group, assigned by President Truman to study the air attacks on Japan, produced a report in July of 1946 that concluded (52-56): Based on a detailed investigation of all the facts and supported by the testimony of the surviving Japanese leaders involved, it is the Survey’s opinion that certainly prior to 31 December 1945 and in all probability prior to 1 November 1945, Japan would have surrendered even if the atomic bombs had not been dropped, even if Russia had not entered the war, and even if no invasion had been planned or contemplated. General (and later president) Dwight Eisenhower – then Supreme Commander of all Allied Forces, and the officer who created most of America’s WWII military plans for Europe and Japan – said: Mother & Child Are Linked At The Cellular Level. Fetal cells remain to heal a mother throughout her life. shortgreenpigg.deviantart.com. 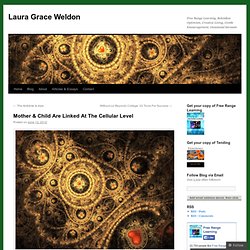 Anglo-Saxon remedy kills hospital superbug MRSA - health - 30 March 2015. If You’re Bad At Math, It’s Because You Never Learned These Simple TricksREALfarmacy.com. If you ever tried to split a bill with friends at dinner, you probably realized many people are somewhat lacking in math skills. 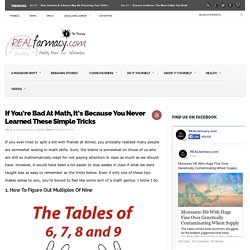 Sure, the blame is somewhat on those of us who are still so mathematically inept for not paying attention in class as much as we should have. However, it would have been a lot easier to stay awake in class if what we were taught was as easy to remember as the tricks below. Even if only one of these tips makes sense to you, you’re bound to feel like some sort of a math genius. Try This 5,000 Year Old Buddhist Health Elixir For Improved Longevity.

Epigenetics Of Being Without Electricity For A Few Days. Epigenetics has been used and abused in many ways - can it tell researchers that an expectant mother had no electricity for a few days? 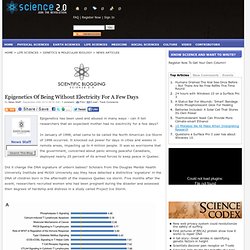 In January of 1998, what came to be called the North American Ice Storm of 1998 occurred. It knocked out power for days in cities and weeks in remote areas, impacting up to 4 million people. It was so worrisome that the government, concerned about panic among peaceful Canadians, deployed nearly 25 percent of its armed forces to keep peace in Quebec. Did it change the DNA signature of unborn babies? Scholars from the Douglas Mental Health University Institute and McGill University say they have detected a distinctive 'signature' in the DNA of children born in the aftermath of the massive Quebec ice storm.

The molecular and cellular functions of the 957 genes analyzed with IPA. 13 years later, the researchers found that DNA within the T cells - a type of immune system cell - of 36 children showed distinctive patterns in DNA methylation. Nonconformity and Freethinking Now Considered Mental Illnesses. Is nonconformity and freethinking a mental illness? 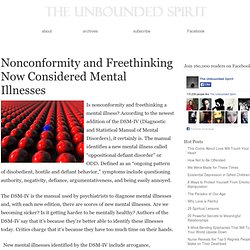 According to the newest addition of the DSM-IV (Diagnostic and Statistical Manual of Mental Disorders), it certainly is. The manual identifies a new mental illness called “oppositional defiant disorder” or ODD. Everything We Have Been Taught About Our Origins Is A Lie. By GRAHAM PICK. 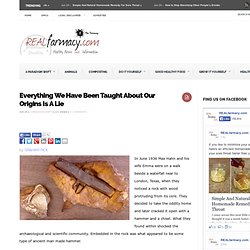