How to Install Android App Not Available in Your Country. Have you ever tried to download an app you were very excited about only to get the notice that the app is not available in your country? 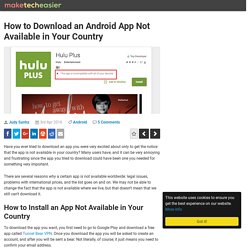 Many users have, and it can be very annoying and frustrating since the app you tried to download could have been one you needed for something very important. There are several reasons why a certain app is not available worldwide: legal issues, problems with international prices, and the list goes on and on. We may not be able to change the fact that the app is not available where we live, but that doesn’t mean that we still can’t download it. 5 Best Android Shortcut Apps for Quick Access to Everything. Smartphones are in a rut. 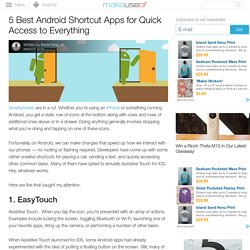 Whether you’re using an iPhone or something running Android, you get a static row of icons at the bottom along with rows and rows of additional ones above or in a drawer. Doing anything generally involves stopping what you’re doing and tapping on one of these icons. Fortunately, on Android, we can make changes that speed up how we interact with our phones — no rooting or flashing required. Developers have come up with some rather creative shortcuts for placing a call, sending a text, and quickly accessing other common tasks. Many of them have opted to emulate Assistive Touch for iOS. Here are five that caught my attention. 11 best photo editing apps on Android. Adobe Photoshop Express: the fast and easy Adobe Photoshop Express is a great all-around photoshopping app for Android. 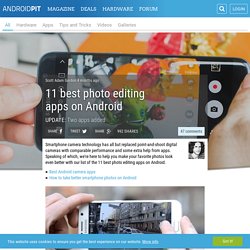 Photos on your smartphone are easily modified with just a few swipes on a simple interface. It gives you the feel of the PC Adobe Photoshop on your mobile device. The absolute basics like rotation, cropping, red-eye removal and flipping are very easy to perform within the app. There is easy blemish-removal that rids your photos of pesky spots of dirt or dust. Top alternatives to Facebook app for Android. Fast for Facebook Fast for Facebook lets you choose a design layout upon installing, rather than having one thrust upon you. 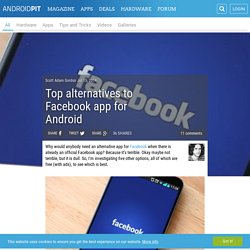 It lets you choose interface size (essentially the amount of "stuff" you can see on screen) and color scheme. It has a dizzying amount of options which are intimidating at a glance, but upon closer inspection make a lot of sense. It also employs some really nice gesture controls. Usually, I’m the first to complain about poorly implemented or gimmicky software, but swiping from the right side of the screen to bring photos into view is a wonderfully convenient feature. Download the Fast for Facebook app here. Friendcaster This is very popular Facebook app alternative. It may be a little too similar to Facebook's own app for me to really appreciate it, but it does have some really interesting options like news feed filters, which can be used to only view posts which contains links or pictures, for example.

Download the Friendcaster app here. Seesmic (Facebook, Twitter) Best GPS and navigation apps for Android. Waze Social GPS Maps & Traffic Waze is a free Navigation app that relies on its community for its traffic information, so it's just as well that it's one of the most popular apps of its kind on the Play Store. 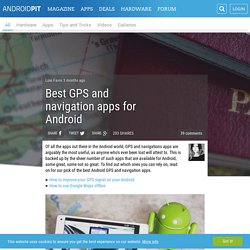 As a member of the Waze community, you can report accidents, police traps and road closures, which then get cross-referenced with other users' input and broadcast for other users. It also has a very nice interface and a few other nifty features, such as showing you the cheapest gas stations en route, and a points-based system, where being an active member of the community sees you climb the Waze ranks. Waze - GPS, Maps & Traffic Maps.Me - Offline Map & Routing Maps.Me was well worth the US$4.99 price tag it used to have on the Play Store, so imagine our delight when the app was made absolutely free. MAPS.ME - GPS Navigation & Map. 11 best weather apps and widgets for Android. YoWindow Free Weather: best looking “Watch weather with pleasure” says YoWindow when you first load it and it truthfully lives up to this promise: this is a great looking Android weather app.

Instead of using simple icons to represent clouds, sunshine and rain, YoWindow displays a cartoon landscape which reflects the real-time weather in your current location. The light level and conditions are accurately represented in the app and you can scroll through the hours – as if scrolling through an online video – to see changes over time. It’s a unique and well-realized weather app, which not only looks good, but is also incredibly easy to use.

Available for free with ads or paid without, check it out in the Play Store via the link below. YoWindow Free Weather. Best Android apps of 2016: 27 apps you must try. Best weather app for Android There are plenty of weather apps available that are more accurate and better looking than the ones that come pre-installed on your Android device. 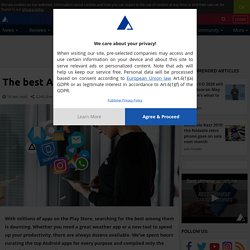 MORECAST is our current favorite weather app here at AndroidPIT because it has one of the best-looking interfaces, with a clear and sensible layout. It's also one of the most advanced apps of its kind, featuring such options as side-by-side weather comparisons for two cities, and accurate weather information for a particular route or journey. MORECAST is the right way to make a smartphone weather app, and best of all, it's free. How to stream movies and TV shows for free on Android.

Best music player apps for Android. Shuttle Music Player Probably the best-looking music app on Android, Shuttle has a good line-up of features, including a six-band equalizer, and automatic downloads for artwork and lyrics. 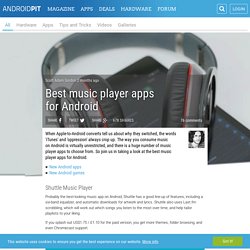 Shuttle also uses Last.fm scrobbling, which will work out which songs you listen to the most over time, and help tailor playlists to your liking. If you splash out US$1.75 / £1.10 for the paid version, you get more themes, folder browsing, and even Chromecast support. Shuttle Music Player Musixmatch Musixmatch offers something a little different. Best Google Play Store alternative app stores. To install these apps you must first go into your settings menu, then to security, and finally tick the unknown sources box. 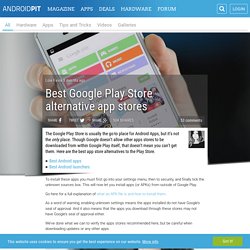 This will now let you install apps (or APKs) from outside of Google Play. Go here for a full explanation of what an APK file is and how to install them. As a word of warning, enabling unknown settings means the apps installed do not have Google’s seal of approval. And it also means that the apps you download through these stores may not have Google’s seal of approval either. We’ve done what we can to verify the apps stores recommended here, but be careful when downloading updates or any other apps. 1. When looking beyond Google Play, the Amazon App Store is the place to start. Amazon gives away a paid app for free every day and using Amazon's dedicated app store is the only way to access them.

Aside from great free titles, the Amazon app store has a huge selection books, movies and songs -- often at lower prices than on Google Play. 2. 3. 4. Best offline Android apps: helping you survive without the internet. Best offline news app: FeedMe If you're like me, you read a ton of news from many different sources. 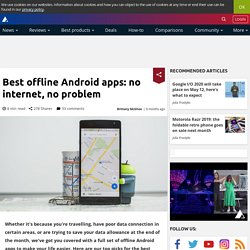 The FeedMe RSS reader app gives you everything you need to digest all the latest events and analysis while offline. This app lets you pull from many sources from Feedly, InoReader, Bazqux, The Older Reader, Feedbin and is currently expanding to more. If you pull up Feedly from the FeedMe app, you'll get a streamlined version of the normal Feedly app with an important component: offline capabilities. Best offline Android apps: helping you survive without the internet. 12 best Android lock screen apps and widgets to reinvent your phone. 1. LokLok: Draw on a lock screen LokLok is a fun idea, but your friends need to get involved too if you want to get the most out of it. 7 best free texting apps for Android. 1. Google Messenger – best for simplicity We're not fans of Hangouts, which complicates the simple process of sending texts, but Google Messenger is another story.

It makes use of many of Hangouts' finer qualities while cutting out the clutter. Messenger has an eye-soothing interface and, as well as sending texts, you can take photos and record audio messages from within the app. Best instant messenger apps for Android. Best for expanding your network: WeChat There are few options for expanding your network. You could try Meetups but those are for specific venues. Social media sites like Facebook and Linkedin specifically forbid adding contacts you don't know personally. There are dating apps but those are for, well, dating. WeChat works like other messenger apps, in fact it works quite well. You can use the 'Friend Radar' to find friends who are nearby so you can meet up with them.

WeChat. Best cloud storage apps: 8 to back up your Android device. Best for unlimited storage: Amazon Cloud Drive The Amazon Cloud Drive service comes in two flavors: Unlimited Photos and Unlimited Everything. Unlimited Photos can be accessed for free with Amazon Prime, or you can pick it up for US$11.99 per year as a standalone product. It's not a particularly expensive and it lets you upload unlimited photos, plus you get an additional 5 GB for videos and other files.

The trouble is, it does little to separate itself from the free Google Drive / Google Photos service. However, Amazon's Unlimited Everything offer is far, far more interesting. It's secure, supports automatic backup, and is accessible on all your devices. Best cloud storage apps: 8 to back up your Android device. Best unknown Android apps you need to check out.

Unified Remote Unified Remote turns your Android phone into a remote control for your PC or laptop, allowing you to use it as a mouse, keyboard, screen mirror and more. It offers a number of presets for popular programs such as Spotify, Netflix and VLC media player, meaning you can remotely skip a song, or turn a movie's volume down without going near your computer. To unlock all the functionality of Unified Remote you'll need to upgrade to the full version, which costs US$3.99, but there is a well-regarded and frequently updated free version available too. For control-freaks like me, it's essential. Unified Remote. Best Android antivirus and mobile security apps 2016. 1. Best Android video players: 5 to ways to watch. There are hundreds of video player apps clogging the Play Store, but we've done the hard work digging them up so you don't have to. Best camera apps for Android: 7 to snap great shots.

Open Camera. Best music player apps for Android. Stop Android Apps From Running In the Background. Organize Your Unread WhatsApp Messages with Chat Helper. Use Android Device as a Microphone For Your Computer. How to Open All Links Directly in Chrome in All Android Apps. 8 Apps Only Android Users Can Use. 4 Ways To Get Paid Android Apps for Free (Legally) 7 of the Best Android Applications for Students. It has become the norm for students to possess smartphones and tablets, but how many are using them to enhance productivity at school or college?

Here are seven superb Android applications that can make learning significantly easier and fun. If you don’t have Wolfram Alpha, you’re definitely missing out. It’s an app that can solve difficult math problems and even show you how to work out the answer for yourself. You also get access to expert knowledge on a wide range of topics such as Statistics, Engineering, Science, Astronomy, Physics, and Chemistry. Price: $2.99.