Sepsis: Antibiotics 'not working' 20 August 2014Last updated at 11:54 ET Sepsis is a potentially fatal condition caused by the body's immune system overreacting to infection Patients are dying from sepsis because of a lack of effective antibiotics, an expert is warning. Mark Bellamy, president of the Intensive Care Society, told the BBC the problem of resistance would get worse unless new and effective antibiotics were developed. 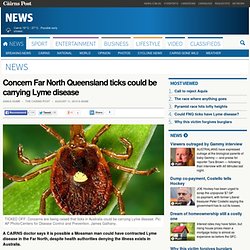 Pic: AP Photo/Centers for Disease Control and Prevention, James Gathany. Source: AP A CAIRNS doctor says it is possible a Mossman man could have contracted Lyme disease in the Far North, despite health authorities denying the illness exists in Australia. Cairns general practitioner Alan McMahon said the tropical habitat and residents living on the edge of the bush made the area a prime place to host ticks bearing Lyme disease, in turn making the region a “logical” location for Lyme disease testing facilities. Inside Colorado’s flourishing, segregated black market for pot. DENVER — In these, the curious, infant days of the state’s legalization of recreational marijuana, of shiny dispensaries and touch-screen ordering and suburban parties where joints are passed like appetizers over granite countertops, no one would notice the duplex. 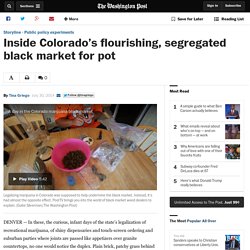 Plain brick, patchy grass behind chain link, it appears weary, resigned to what the tenant calls “the ‘hood” and others might call left-behind Denver, untouched by the frenzy of investment that has returned to downtown. The front door of the duplex stays closed. Sheer white curtains cover the living room window. Can Caffeine Cause Chest Pains? Chest pains may occur in some people after drinking caffeine. 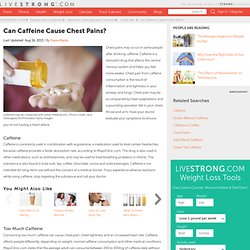 Caffeine is a stimulant drug that affects the central nervous system and helps you feel more awake. Chest pain from caffeine consumption is the result of inflammation and tightness in your airways and lungs. Chest pain may be accompanied by heart palpitations and a pounding sensation felt in your chest, throat and arm. Have your doctor evaluate your symptoms to ensure you’re not having a heart attack. Caffeine is commonly used in combination with ergotamine, a medication used to treat certain headaches, because caffeine provides a faster absorption rate, according to MayoClinic.com.

Consuming too much caffeine can cause chest pain, chest tightness and an increased heart rate. What It Feels Like to Get Bitten by a Black Widow Spider - Megan Garber.

Get bitten by mozzies? Some smells are tastier than others. Far North cancer cure set for human trials. Painful initiation for first victim of suspected irukandji jellyfish in stinger season at Low Isles near Port Douglas. THAT STINGING FEELING: Adelaide man Dennis Hayles is lucky to be alive after being stung by a suspected irukandji jellyfish at Low Isles on Wednesday. 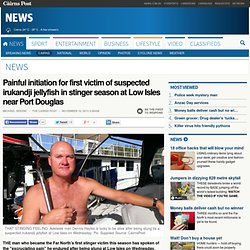 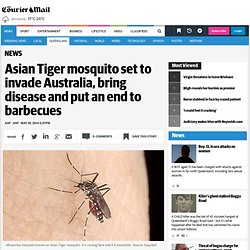 It’s coming here and it is insatiable. Source: Supplied. Consciousness on-off switch discovered deep in brain - life - 02 July 2014. Read full article Continue reading page |1|2 ONE moment you're conscious, the next you're not. 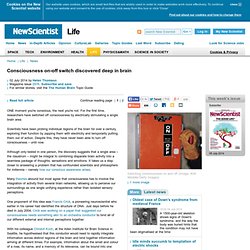 For the first time, researchers have switched off consciousness by electrically stimulating a single brain area. Scientists have been probing individual regions of the brain for over a century, exploring their function by zapping them with electricity and temporarily putting them out of action. Your Sunscreen Is Really Out of Date. Here's What Congress Is Doing About It. The U.S. may finally catch up to other countries in sunscreen technology. 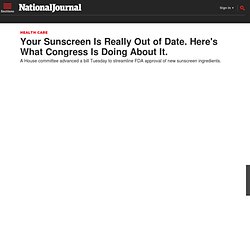 The ingredients that make their sunscreen superior have been awaiting approval—or any sort of decision—from the Food and Drug Administration for at least 12 years, with the last over-the-counter sunscreen ingredient approved by the agency in the 1990s. There are currently eight such ingredients stuck in the system. Meanwhile, these technologies have been available in Europe, Asia, and Central and South America, sometimes for more than 15 years.

As a result of the backlog, American consumers have been unable to buy the sunscreens that provide the most effective protections against harmful rays. What’s behind your blood type? When my parents informed me that my blood type was A+, I felt a strange sense of pride. 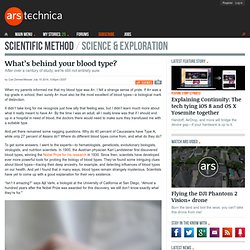 If A+ was a top grade in school, then surely A+ must also be the most excellent of blood types—a biological mark of distinction. It didn’t take long for me recognize just how silly that feeling was, but I didn’t learn much more about what it really meant to have A+. By the time I was an adult, all I really knew was that if I should end up in a hospital in need of blood, the doctors there would need to make sure they transfused me with a suitable type. And yet there remained some nagging questions. Why do 40 percent of Caucasians have Type A, while only 27 percent of Asians do? Daily aspirin 'cuts bowel and stomach cancer deaths' 5 August 2014Last updated at 19:50 ET By Smitha Mundasad Health reporter, BBC News Aspirin seems to offer most protection against cancers of the digestive system Taking aspirin every day can reduce the chance of developing or dying from bowel and stomach cancers, a review of all available evidence suggests. 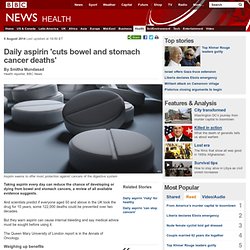 And scientists predict if everyone aged 50 and above in the UK took the drug for 10 years, some 122,000 deaths could be prevented over two decades. But they warn aspirin can cause internal bleeding and say medical advice must be sought before using it. The Queen Mary University of London report is in the Annals of Oncology. Continue reading the main story. Harnessing depression: One Ars writer’s journey. Symptoms of coccydynia, tail bone pain. Sitting Too Long? Columbia Neurosurgery. The spinal cord begins at the base of the brain and continues through the bony canal of the cervical (neck) and thoracic (chest) portions of the spine to end in the upper region of the lumbar (lower) spine as a bundle of individual nerve fibers. 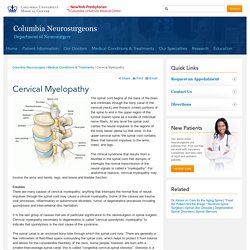 At any level the spinal cord carries the neural impulses to the regions of the body below (distal to) that level. In the upper cervical spine, the spinal cord contains fibers that transmit impulses to the arms, chest, and legs. The clinical syndrome that results from a disorder in the spinal cord that disrupts or interrupts the normal transmission of the neural signals is called a “myelopathy”. For anatomical reasons, cervical myelopathy may involve the arms and hands, legs, and bowel and bladder function.