Create your free Blog. Report: U.S. trained terror group. When the U.S. wants to fund, train, arm or otherwise align itself with a Terrorist group or state sponsor of Terror — as it often does — it at least usually has the tact to first remove them from its formal terrorist list (as the U.S. did when it wanted to support Saddam in 1982 and work with Libya in 2006), or it just keeps them off the list altogether despite what former Council on Foreign Relations writer Lionel Beehner described as “mounds of evidence that [they] at one time or another abetted terrorists” (as it has done with close U.S. allies in Saudi Arabia and Pakistan, along with the El Salvadoran death squads and Nicaraguan contras armed and funded in the 1980s by the Reagan administration). 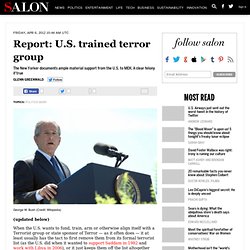 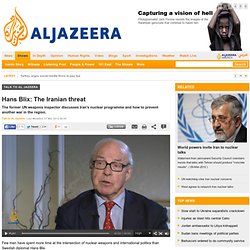 As the former head of the International Atomic Energy Agency (IAEA) and then chief United Nations weapons inspector, Blix was at the centre of events when he publicly contradicted claims from the administration of former US president George W Bush that Iraq had weapons of mass destruction (WMD). It was an assessment the US pushed aside. Blix also accused the British government of dramatising the threat of weapons in Iraq in order to strengthen its case for joining the 2003 war against Saddam Hussein. No stockpiles of weapons of mass destruction were ever found. In his 2004 book Disarming Iraq, Blix gives an account of the events and inspections before the coalition began its invasion. The View from Nowhere: Questions and Answers. Nov.10 “American journalism is dumber than most journalists, who often share my sense of absurdity about these practices. 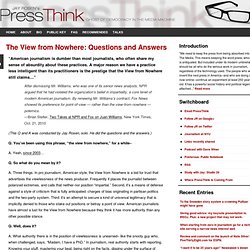 A major reason we have a practice less intelligent than its practitioners is the prestige that the View from Nowhere still claims…” After dismissing Mr. Williams, who was one of its senior news analysts, NPR argued that he had violated the organization’s belief in impartiality, a core tenet of modern American journalism. By renewing Mr. Howard Zinn: "On Human Nature and Aggression." Ahmadinejad I Am Not Anti Semitic. Iran’s President Ahmadinezhad Holds New York News Conference 21 SepNews conference by Iran’s President Mahmud Ahmadinezhad at UN headquarters in New York — correspondents’ questions in English simultaneously translated into Persian — liveIslamic Republic of Iran News Network Television (IRINN)Friday, September 22, 2006 Regarding the issue of the invasion of Lebanon, you saw that everyone – of all religions, of all faiths – condemned it. 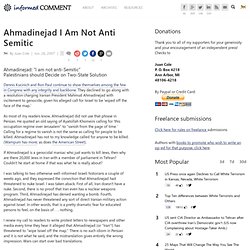 Because the nations have awakened. The nations hate aggression. . . Some people think that if they level accusations at Ahmadinezhad – saying: He is a terrorist, he is a murderer, he is anti-Semitic – the issue would be resolved. Left I on the News. The standard meme, repeated in the article I'm about to cite here, is that Iranian President Ahmadinejad has called for Israel "to be wiped off the map. 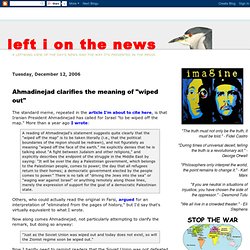 " More than a year ago I wrote: McChrystal: We've Shot 'An Amazing Number' Of Innocent Afghans. As reported in the New York Times last week, a significant number of innocent Afghans continue to be killed by US and NATO forces despite new rules issued by Gen. 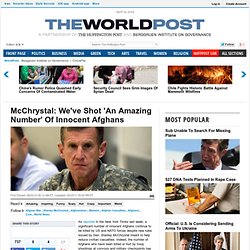 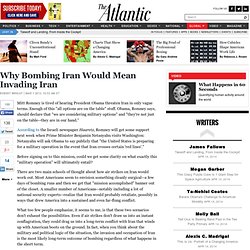 Enough of this "all options are on the table" stuff. Obama, Romney says, should declare that "we are considering military options" and "they're not just on the table--they are in our hand. " According to the Israeli newspaper Haaretz, Romney will get some support next week when Prime Minister Benjamin Netanyahu visits Washington: Netanyahu will ask Obama to say publicly that "the United States is preparing for a military operation in the event that Iran crosses certain 'red lines'. " Before signing on to this mission, could we get some clarity on what exactly this "military operation" will ultimately entail? There are two main schools of thought about how air strikes on Iran would work out.

Inbox. Slanting the Case on Iran’s Nukes. From the Archive: As the International Atomic Energy Agency clashes with Iran over access to a military site, the U.S. government and mainstream news media are denouncing Iran. 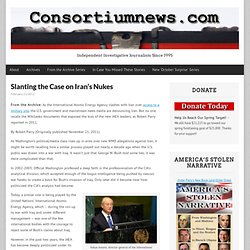 But no one recalls the WikiLeaks documents that exposed the bias of the new IAEA leaders, as Robert Parry reported in 2011. By Robert Parry (Originally published November 21, 2011) As Washington’s political/media class rises up in arms over new WMD allegations against Iran, it might be worth recalling how a similar process played out nearly a decade ago when the U.S. public was drawn into a war with Iraq. It wasn’t just that George W. How the Media got the Parchin Access Story Wrong. News media reported last week that Iran had flatly refused the International Atomic Energy Agency (IAEA) access to its Parchin military test facility, based on a statement to reporters by IAEA Deputy Director General, Herman Nackaerts, that “We could not get access”. 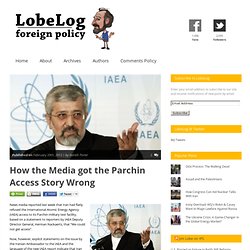 Now, however, explicit statements on the issue by the Iranian Ambassador to the IAEA and the language of the new IAEA report indicate that Iran did not reject an IAEA visit to the base per se but was only refusing access as long as no agreement had been reached with the IAEA governing the modalities of cooperation. That new and clarifying information confirms what I reported February 23. 23 incredible new technologies you’ll see by 2021. Free Web Development Tools for Windows. The Energy Lie (Suppression of Technological Evolution) - Home - StumbleUpon. How to Write a Novel Using the Snowflake Method. Congo research - Red rubber : the story of the rubber slave trad... Congo research - Helvette på Utøya (utoyahelvete) Congo research - "The West Is Terrified of Arabic Democracies", Noam Chomsky interviewed by Qantara. 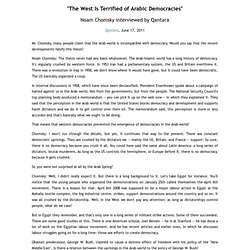 Congo research - Sci-Fi-Superfan-Reference-Manual.jpg from geektyrant.com - StumbleUpon. Congo research - The Missing Value in British Politics. In this taster of his forthcoming book, Why Voice Matters: Culture and Politics After Neoliberalism, Nick Couldry argues for the importance of voice in challenging the dominance market values hold over political and social life. With an approaching general election, we will get used to dissecting the rival claims of political parties. Congo research - Nick Couldry. The wealth of responses to the horrific events of 11 September in openDemocracy is only one index of their global impact. Among the contributors, Brendan O’Leary and Tom Nairn each underline the significance of the ‘silence’ that surrounded them, the absence of any expression of wider purpose from their perpetrators.

Brendan O’Leary suggests one explanation for this chilling silence. If those responsible considered their actions ‘self-evidently right’, the latter would be ‘value rational’ rather than ‘instrumentally rational’. A religious motive, rather than (for example) a political or territorial one, is a matter for true believers, beyond rational discussion; for them, it needs no wider justification. Congo research - The Skyrim Marathon [Pic]

Congo research - 8 Things Everybody Ought to Know About Concentrating. “Music helps me concentrate,” Mike said to me glancing briefly over his shoulder. Mike was in his room writing a paper for his U.S. History class.

Technology. Occupations around the world - the live streams. This page is updated continuously - please leave a comment below if you know of any occupations that are not listed here. You can also reach me here or email me at occupy@fredrikwalloe.com. If you're looking for a particular live stream, it's easier to search the site. In Firefox you press Ctrl+F to do this. If you're looking for, say, Moscow, you type in 'Moscow', or #OccupyMoscow. When you've found a stream you want to watch it's best to click the video and watch it on that website, as this page is quite resource-heavy.