Replanting oil palm may be driving a second wave of biodiversity loss. The environmental impact of palm oil production has been well publicised. 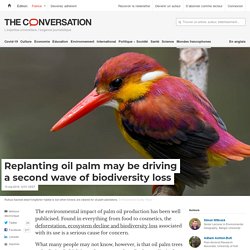 Found in everything from food to cosmetics, the deforestation, ecosystem decline and biodiversity loss associated with its use is a serious cause for concern. Palm oil and biodiversity. The Conversation. Power lines may mess with honeybee learning and behavior. Power lines could be messing with honeybees by emitting electromagnetic fields that can alter the insects’ behavior and ability to learn. 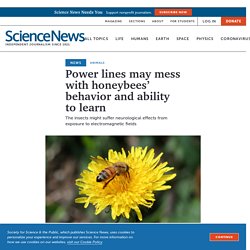 In the lab, honeybees (Apis mellifera) were more aggressive toward other bees after being exposed to electromagnetic fields, or EMFs, at strengths similar to what they might experience at ground level under electricity transmission lines, researchers report October 10 in PLOS ONE. The mystery of vanishing honeybees is still not definitively solved. U.S. honeybees had the worst winter die-off in more than a decade. Increased aggression and reduced aversive learning in honey bees exposed to extremely low frequency electromagnetic fields.

Abstract Honey bees, Apis mellifera, are a globally significant pollinator species and are currently in decline, with losses attributed to an array of interacting environmental stressors. 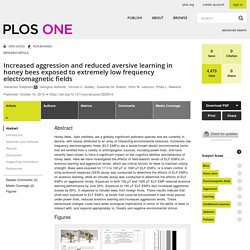 Extremely low frequency electromagnetic fields (ELF EMFs) are a lesser-known abiotic environmental factor that are emitted from a variety of anthropogenic sources, including power lines, and have recently been shown to have a significant impact on the cognitive abilities and behaviour of honey bees. Here we have investigated the effects of field-realistic levels of ELF EMFs on aversive learning and aggression levels, which are critical factors for bees to maintain colony strength. Power lines may mess with honeybee learning and behavior. Replanting oil palm may be driving a second wave of biodiversity loss. "Healing Crystals" Bring Bad Vibes For The Environment And Local Communities. Crystals are the new must-have accessory for those seeking "well-being" and “positive energies”. 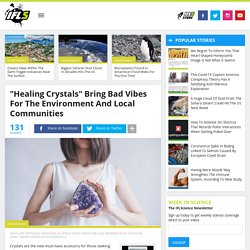 Off the back of big celebrity endorsements, these pretty (although ultimately useless) semiprecious gemstones have seen an unlikely comeback over the past few years. Needless to say, any supposed health benefit from these stones is currently pure pseudoscience. However, even beyond their promises of “good vibes” straight from Mother Nature, these gemstones could be having a negative effect on the environment and local communities. As reported by The Guardian, many “healing crystals” – whether it's opals or quartz, tourmaline or amethyst – originate from a murky supply chain that starts in conflict-struck countries with lax labor laws and environmental regulations. The industry is largely unregulated in impoverished areas, riddled with violent military groups, and bolstered up by underpaid miners working in dangerous conditions. Then comes the environmental impact. Do You Know Where Your Healing Crystals Come From?

Are crystals the new blood diamonds? Crystallisation is a transition from chaos to perfection; the evolution of the crystal industry has been less simple. 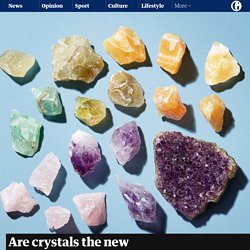 Millions of years ago liquid rock inside the earth cooled and hardened, and this is how crystals formed at the twinkling centre of the earth. Kindle Daily Deals: Kindle Store. Conservation in crisis: ecotourism collapse threatens communities and wildlife. From the vast plains of the Masai Mara in Kenya to the delicate corals of the Aldabra atoll in the Seychelles, conservation work to protect some of the world’s most important ecosystems is facing crisis following a collapse in ecotourism during the Covid-19 pandemic. 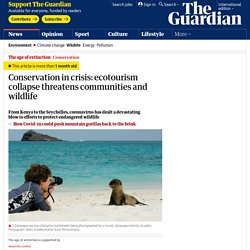 Organisations that depend on visitors to fund projects for critically endangered species and rare habitats could be forced to close, according to wildlife NGOs, after border closures and worldwide travel restrictions abruptly halted millions of pounds of income from tourism. Conservation in crisis: why Covid-19 could push mountain gorillas back to the brink. Insect numbers down 25% since 1990, global study finds. The biggest assessment of global insect abundances to date shows a worrying drop of almost 25% in the last 30 years, with accelerating declines in Europe that shocked scientists. 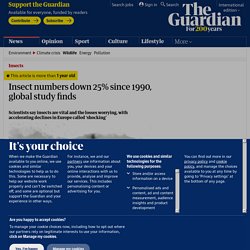 The analysis combined 166 long-term surveys from almost 1,700 sites and found that some species were bucking the overall downward trend. In particular, freshwater insects have been increasing by 11% each decade following action to clean up polluted rivers and lakes. Critically endangered herb thriving on Macquarie Island after seven-year feral animal eradication program. A critically-endangered herb once thought extinct on sub-Antarctic Macquarie Island has been found growing at a new location as the world-heritage site continues its rabbit-free recovery. 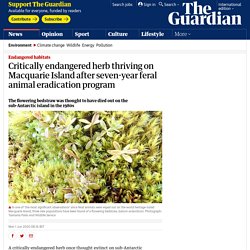 The remote island was declared free of pests in 2014, following a seven-year feral animal eradication project. Galium antarcticum, a type of flowering bedstraw, was thought to have died out in the early 1980s until 500 plants were discovered in 2013 at Skua Lake near the island’s west coast. Scientists Thought This Creature Was Extinct For 30 Years. Then It Returned. Wildlife conservationists are celebrating this week as the silver-backed chevrotain — a diminutive deer-like species thought to be extinct for 30 years — has been spotted in Vietnam. 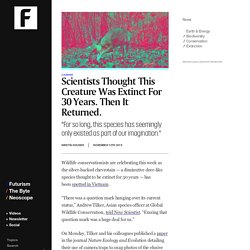 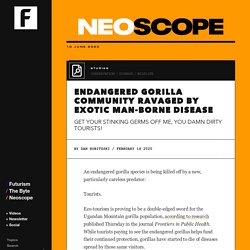 Study: More Than 500 Vertebrates Poised To Go Extinct. Mass Extinction Over 500 land-based vertebrates — animals with spines — are on the brink of extinction. New research suggests that rates of animal extinction, explicitly caused by human activity, is accelerating to unsustainable levels. And by focusing on mammals, birds, amphibians, and reptiles, Earther reports that the scientists behind the study hope people will take note of the dire problem.

Falling Dominoes The problem of mass extinction goes far beyond the 515 vertebrates identified as being “one the brink of extinction” in the study, which was published Monday in the journal PNAS. “We are no longer looking at the loss of obscure species that most people aren’t interested in,” Tierra Curry, a senior scientist at the Center for Biological Diversity, who’s unaffiliated with the new study, told Earther. Close To Home The researchers behind the study warned that each time an animal goes extinct, it also threatens humanity’s continued survival. Scientists Fight Plan to Release Gene-Hacked Mosquitoes in TX, FL. Fly, Pretties! Over the next two years, the biotech company Oxitec plans to release millions of genetically modified mosquitoes in Florida and Texas in an attempt to stop the spread of diseases like dengue and Zika. The U.S. Tesla Supplier: New Battery Will Last a Shocking 1.2 Million Miles.

Million Mile Tesla’s Chinese battery supplier, Contemporary Amperex Technology Co., claims it’s created a power pack that lasts for 2 million kilometers (1.24 million miles), Bloomberg reports. If true, it would represent a massive leap in the longevity of an electric car battery. 'Tip of the iceberg': is our destruction of nature responsible for Covid-19? Dark crystals: the brutal reality behind a booming wellness craze.