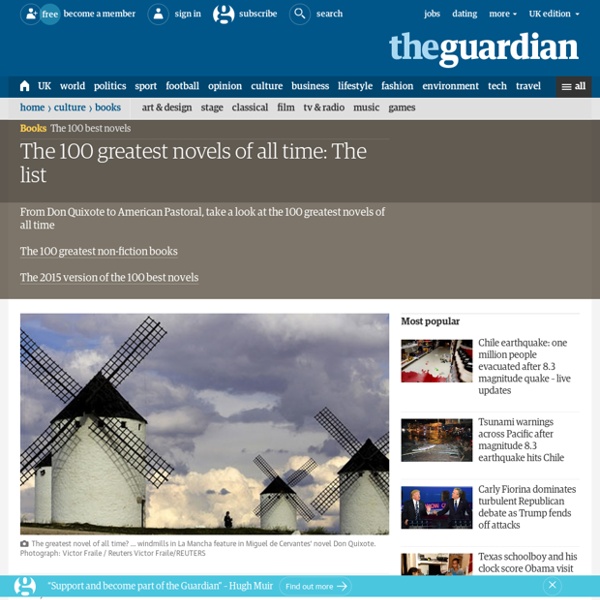 100 Best Novels « Modern Library ULYSSES by James Joyce Written as an homage to Homer’s epic poem The Odyssey, Ulysses follows its hero, Leopold Bloom, through the streets of Dublin. Overflowing with puns, references to classical literature, and stream-of-consciousness writing, this is a complex, multilayered novel about one day in the life of an ordinary man. Initially banned in the United States but overturned by a legal challenge by Random House’s Bennett Cerf, Ulysses was called “a memorable catastrophe” (Virginia Woolf), “a book to which we are all indebted” (T. S. Eliot), and “the most faithful X-ray ever taken of the ordinary human consciousness” (Edmund Wilson). Click here to read more about ULYSSES THE GREAT GATSBY by F. Set in the Jazz Age, The Great Gatsby tells the story of the mysterious millionaire Jay Gatsby, his decadent parties, and his love for the alluring Daisy Buchanan. A PORTRAIT OF THE ARTIST AS A YOUNG MAN by James Joyce Click here to read more about A PORTRAIT OF THE ARTIST AS A YOUNG MAN U.S.A.

The 100 greatest non-fiction books Art The Shock of the New by Robert Hughes (1980)Hughes charts the story of modern art, from cubism to the avant garde The Story of Art by Ernst Gombrich (1950)The most popular art book in history. Gombrich examines the technical and aesthetic problems confronted by artists since the dawn of time Ways of Seeing by John Berger (1972)A study of the ways in which we look at art, which changed the terms of a generation's engagement with visual culture Biography Lives of the Most Excellent Painters, Sculptors, and Architects by Giorgio Vasari (1550)Biography mixes with anecdote in this Florentine-inflected portrait of the painters and sculptors who shaped the Renaissance The Life of Samuel Johnson by James Boswell (1791)Boswell draws on his journals to create an affectionate portrait of the great lexicographer The Diaries of Samuel Pepys by Samuel Pepys (1825)"Blessed be God, at the end of the last year I was in very good health," begins this extraordinarily vivid diary of the Restoration period

Guardian Books podcast: Reading the Arab spring As Egypt celebrates the first anniversary of the Tahrir Square demonstrations, we look to the literature coming out of the Arab world. Ahdaf Soueif explains what it is like to live in Tahrir Square, while the Guardian's Ian Black – just back from in Syria – finds the books that offer the most nuanced picture of the Arab spring. Samir El-Youssef, co-founder of the new online literary magazine The Arab-Israeli Book Review, joins the distinguished translator Peter Clark to discuss the most exciting new writers in Arabic, and the kinds of books they are writing. And the American graphic novelist Craig Thompson comes to the studio to tell us about the inspiration for his Middle-Eastern epic, Habibi. Reading listThe Invisible Arab by Marwan Bishwara (Nation Books)Cairo: My City, Our Revoluion by Ahdaf Soueif (Bloomsbury)Karama!

Top 25 Best Fantasy Books This one is full to the brim with gritty, amoral, cynical dark humor. A different sort of fantasy, but one that's extremely refreshing, disturbing, and entertaining -- one of the best fantasy reads to come out the past couple years. Even as we near 2015, The Prince of Thorns still stands tall among other strong fantasy books. For a dark, gritty, anti-hero driven fantasy, I felt strong Abercrombie vibes. This is the brutal story of Prince Jorg, a teenage princeling who abandoned his father's castle after witnessing the murder of his mother and brother. The narration is first person and well done at that -- I haven't been so entertained by first person narration in ages. Lawrence has managed to do well what few authors ever do: create a compelling anti-hero -- arguably one of the most complex and interesting in the whole fantasy genre. Well Lawrence does not fall into these trappings. I highly recommend this book, especially if you are looking for a darker sort of tale.

The 11 Best Psychology and Philosophy Books of 2011 by Maria Popova What it means to be human, how pronouns are secretly shaping our lives, and why we believe. After the year’s best children’s books, art and design books, photography books, science books, history books, and food books, the 2011 best-of series continues with the most compelling, provocative and thought-provoking psychology and philosophy books featured here this year. We spend most of our lives going around believing we are rational, logical beings who make carefully weighted decisions based on objective facts in stable circumstances. Of course, as both a growing body of research and our own retrospective experience demonstrate, this couldn’t be further from the truth. For the past three years, David McRaney’s cheekily titled yet infinitely intelligent You Are Not So Smart has been one of my favorite smart blogs, tirelessly debunking the many ways in which our minds play tricks on us and the false interpretations we have of those trickeries. Originally featured in November.

Rory Gilmore Reading Challenge | It's Time to Read! - Book reviews and news Thank you for all the comments on this page! This is a collection of books mentioned or read on Gilmore Girls! Some of them might have been films instead of the books themselves but I see no problem in reading them either! Your Picks: Top 100 Science-Fiction, Fantasy Books More than 5,000 of you nominated. More than 60,000 of you voted. And now the results are in. The winners of NPR's Top 100 Science-Fiction and Fantasy survey are an intriguing mix of classic and contemporary titles. Over on NPR's pop culture blog, Monkey See, you can find one fan's thoughts on how the list shaped up, get our experts' take, and have the chance to share your own. A quick word about what's here, and what's not: Our panel of experts reviewed hundreds of the most popular nominations and tossed out those that didn't fit the survey's criteria (after — we assure you — much passionate, thoughtful, gleefully nerdy discussion). So, at last, here are your favorite science-fiction and fantasy novels. More than 5,000 of you nominated. So, at last, here are your favorite science-fiction and fantasy novels.

The Project Gutenberg eBook of Bouvard and Pécuchet, by Gustave Flaubert.