That's Not Me: How Our Thriving British Music Scene is Reclaiming Its Identity. Illustration by Marta Parszeniew Britain’s greatest export is music. 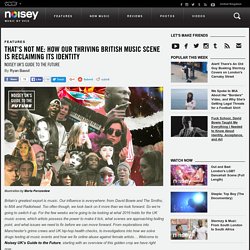 Our influence is everywhere: from David Bowie and The Smiths, to MIA and Radiohead. Facial Recognition Security Cameras : Family Eye. The 'Kazoku Mesen' or Family Eye is an extremely high-tech -- and remarkably cute-looking -- home security camera. 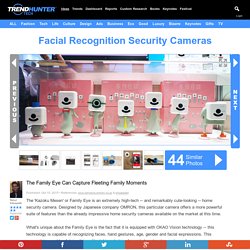 Designed by Japanese company OMRON, this particular camera offers a more powerful suite of features than the already impressive home security cameras available on the market at this time. What's unique about the Family Eye is the fact that it is equipped with OKAO Vision technology -- this technology is capable of recognizing faces, hand gestures, age, gender and facial expressions. Biometric Identification Platforms : verifyme. By: Laura McQuarrie - Published: Oct 22, 2015 • References: verifyme & nasdaq VerifyMe is an ID services platform that promises you can "forget your passwords" and businesses can still feel at ease about protecting identities, fraud and counterfeiting. 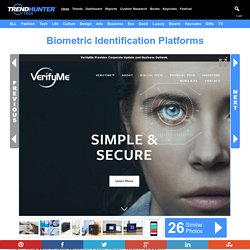 The service implements a number of physical, cyber and biometric technology in order ensure a high level of security for all its end users. Most recently, VerifyMe announced that it will be introducing advanced biometric security technology from KeyLemon into its newest version of the platform. Digital security solutions from VerifyMe replace passwords and pins with simple multi-factor authentications like facial, voice and fingerprint recognition, as well as personal color selection and GPS location detection. Selfie Payment Systems : selfie pay. By: Laura McQuarrie - Published: Oct 22, 2015 • References: cnbc In place of passwords, which are easily forgotten or compromised, MasterCard is now testing out 'Selfie Pay' as a way for people to securely authorize online transactions. 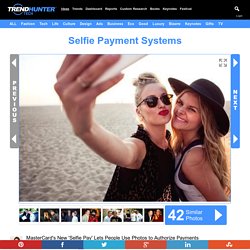 Testing for the new payment system is going on with over 200 employees from the First Tech Federal Credit Union in the United States over the course of two months. Rather than typing in a password to finalize a purchase, people will be able to scan a fingerprint or as a more fun option, take a selfie. To make full use of the Selfie Pay system, users are required to download the brand's Identity Check app.

3D-Printed Blood Vessels Could Be Used for Transplants. Using 3D-printing methods, researchers have created artificial blood vessels in a lab. 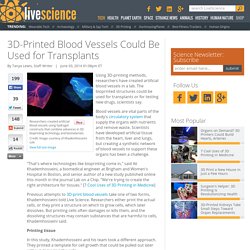 The bioprinted structures could be used for transplants or for testing new drugs, scientists say. Blood vessels are vital parts of the body's circulatory system that supply the organs with nutrients and remove waste. Scientists have developed artificial tissue from the heart, liver and lungs, but creating a synthetic network of blood vessels to support these organs has been a challenge. 3D Printing Can Improve Face Transplants. Surgeons are using new, highly accurate 3D printers to guide face transplantation operations, making the procedures faster and improving outcomes, according to a new report. 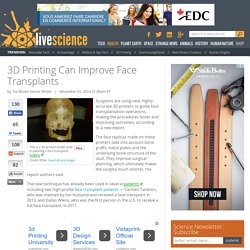 The face replicas made on these printers take into account bone grafts, metal plates and the underlying bone structure of the skull. They improve surgical planning, which ultimately makes the surgery much shorter, the report authors said. The new technique has already been used in several patients. Doctors Could 3D-Print Micro-Organs with New Technique. Gone are the days when 3D printers merely built plastic trinkets — scientists say 3D-printed structures loaded with embryonic stem cells could one day help doctors print out micro-organs for transplant patients. 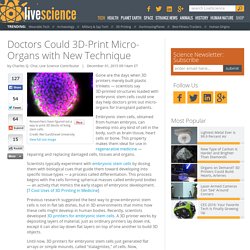 Embryonic stem cells, obtained from human embryos, can develop into any kind of cell in the body, such as brain tissue, heart cells or bone. This property makes them ideal for use in regenerative medicine — repairing and replacing damaged cells, tissues and organs. Scientists typically experiment with embryonic stem cells by dosing them with biological cues that guide them toward developing into specific tissue types — a process called differentiation. 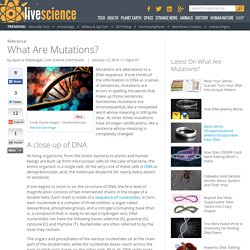 A close-up of DNA All living organisms, from the tiniest bacteria to plants and human beings are built up from microscopic cells (in the case of bacteria, the entire organism is a single cell). NHS DNA scheme to fight cancer and genetic diseases. A new genetics project could help "unlock a series of secrets about devastating diseases", the NHS says. 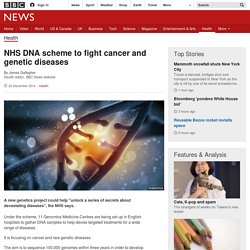 Under the scheme, 11 Genomics Medicine Centres are being set up in English hospitals to gather DNA samples to help devise targeted treatments for a wide range of diseases. It is focusing on cancer and rare genetic diseases. The aim is to sequence 100,000 genomes within three years in order to develop new tests and drugs. Doctors will offer suitable patients the opportunity to take part in the scheme. Exposure to 'good bacteria' as a baby could prevent asthma and allergies. Bacteria get a lot of bad press when they make our lives harder, but all the good that they do for us mostly goes unnoticed. 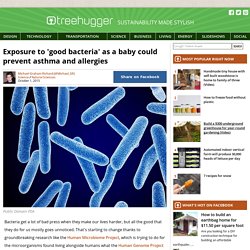 DNA sequencing reveals that parasite is actually a tiny jellyfish. Using genome sequencing, researchers have discovered that parasites called myxozoans are actually microscopic jellyfish. Human Feelings as Drugs. Pirate Manu | On October 22, 2013. Icelandic DNA Sheds Light on Disease. B i o p l a s t i c _ F a n t a s t i c - JOHANNA SCHMEER. BIOPLASTIC FANTASTIC — Between products and organisms As interactive products are growing closer and closer to the body, and scientists are making advances in the use of biological matter in materials suitable for product design, it feasible that soon biochemical processes will be taking place in and on our technological devices. Bioplastic Fantastic investigates new types of products and interactions which might emerge from these material innovations in the fields of bio- and nanotechnology.

It speculates about the future design and use of domestic products made from enzyme-enhanced bioplastics. The concept is based on a recent scientific breakthrough in the synthesis of functioning “biological” cells made from polymers and enzymes. Halfway between products and organisms, seven “biological devices” produce all food and energy needed for humans to survive simply by being exposed to light (through artificial photosynthesis).

The seven products: Dolce & Gabbana launches luxury hijab collection. Dolce & Gabbana is to launch a collection of hijabs and abayas targeting wealthy Muslim women in the Middle East. The debut line by the Italian luxury fashion house features headscarves and the loose, full-length outer garment favoured by some Muslim women. The hijabs come in sheer georgette and satin weave charmeuse fabrics, with D&G signature lace detailing on the hems. 3D-Printed Facial Accessories : Facial Accessories. Why Prosthetic Eyes, Made From Acrylic, Are Works of Art. Babies With Three Genetic Sources. Holiday Gift Guide 2015: Pins and Patches. Conventional Wisdom: BronyCon. How DIY Culture Is Thriving In The U.K. Guggenheim Bilbao: The future of design is Africa.

SLMMSK Anti-Selfie App. Alma Haser’s “Cosmic Surgery” Pop-Up Book. Why Facebook has become so important to the sign language community. Sign language users once had to meet at local deaf clubs to have conversations and share their views. An Identity Crisis of Generational Proportions - Millennial EvangelicalMillennial Evangelical. Blurred Lines: Why Gender-Neutral Fashion Is the New Normal.