14 Steps That Will Evolve Your Views On Gay Marriage. Ian Usher has sold his life, what is he doing next? CINEMETRICS — film data visualization. Relationships - Yahoo! Lifestyle UK. An atheist at Christmas: Oh come all ye faithless. Christmas is inevitably a rather problematic time for atheists. 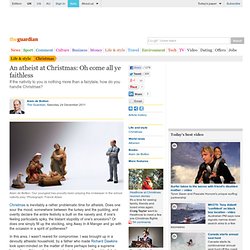 Does one sour the mood, somewhere between the turkey and the pudding, and overtly declare the entire festivity is built on the naivety and, if one's feeling particularly spiky, the blatant stupidity of one's ancestors? Or does one simply fill up the stocking, sing Away In A Manger and go with the occasion in a spirit of politeness? In this area, I wasn't reared for compromise. I was brought up in a devoutly atheistic household, by a father who made Richard Dawkins look open-minded on the matter of there perhaps being a supreme being. I recall him reducing my sister to tears in an attempt to dislodge her notion that a reclusive god might dwell somewhere in the universe. Graphene BBC. Click's Dan Simmons looks at graphene's chances for 1bn euros of funding The material graphene was touted as "the next big thing" even before its pioneers were handed the Nobel Prize last year. 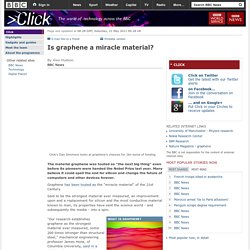 Many believe it could spell the end for silicon and change the future of computers and other devices forever. Graphene has been touted as the "miracle material" of the 21st Century. Said to be the strongest material ever measured, an improvement upon and a replacement for silicon and the most conductive material known to man, its properties have sent the science world - and subsequently the media - into a spin. "Our research establishes graphene as the strongest material ever measured, some 200 times stronger than structural steel," mechanical engineering professor James Hone, of Columbia University, said in a statement. 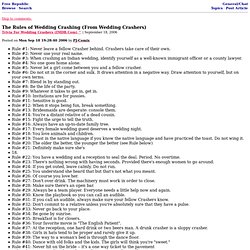 The Rules of Wedding Crashing (From Wedding Crashers) Trivia For Wedding Crashers (IMDB.Com) ^ | September 18, 2006 Posted on Mon Sep 18 19:28:40 2006 by PJ-Comix Rule #1: Never leave a fellow Crasher behind. Crashers take care of their own.Rule #2: Never use your real name.Rule #3: When crashing an Indian wedding, identify yourself as a well-known immigrant officer or a county lawyer.Rule #4: No one goes home alone.Rule #5: Never let a girl come between you and a fellow crasher.Rule #6: Do not sit in the corner and sulk.

It draws attention in a negative way. TOPICS: Humor; Music/Entertainment; TV/MoviesKEYWORDS: weddingcrashers I saw "Wedding Crashers" on the tube for the first time last night and I laughed so hard that I ached. BTW, how common is wedding crashing? 1 posted on Mon Sep 18 19:28:42 2006 by PJ-Comix. Ha! Funny Quotes about Life, Funny Life Quotes See the Lighter Side of Life. Feeling low? Geek Brothers Talking, MARSHGAMMON RULES. The 50 Most Brilliant, Obnoxious, Or Delightfully Sociopathic Facebook Posts Of 2011. After spending a good chunk of this year gathering Facebook posts entertaining enough for public consumption and/or ridicule, it felt less like we were putting together a humor website and more like we were preparing our PhD dissertation in sociology. 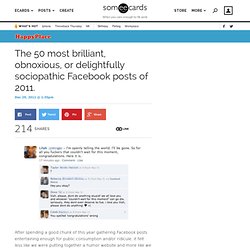 These 50 posts were selected out of the hundreds we've shared with you throughout the year. They reflect all of the wit, self-absorption, shamelessness, and astounding unfamiliarity with basic grammar that makes Facebook such a wonderland of human frailty and woefully regrettable over-sharing. We hope you enjoy them as much as we did, and we thank you for being quick-fingered enough to screenshot your friends' more embarrassing status updates before they could click delete.

Consider this list a year-end toast to everyone who makes Facebook the wonderful nightmare that it is... SquareMile. Best of Normal Day. TV Licensing needs YOU — Money — The Boar. In an exercise of propaganda that hasn’t been seen since the days of conscription, the people at TV Licensing have been threatening innocent students all over campus with letters and posters reminding us of the law, insisting that we all do need a licence, especially if you think you don’t. 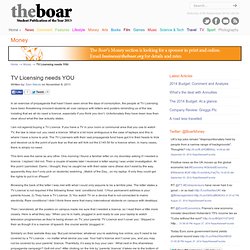 Unfortunately they have been less than clear about what the law actually states. I am not against buying a TV Licence. If you have a TV in your room or communal area that you use to watch TV, the law is clear-cut: you need a licence. Consumer Laws. If they've delayed your flight by hours, the airline must look after you To mark National Consumer Week, here are five laws the canny shopper should be using in their battle to get stuff that actually works. 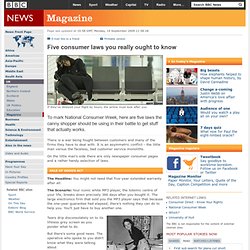 There is a war being fought between customers and many of the firms they have to deal with. It is an asymmetric conflict - the little man versus the faceless, bad customer service monoliths. On the little man's side there are only newspaper consumer pages and a rather handy selection of laws. The Headline: You might not need that five-year extended warranty after all.