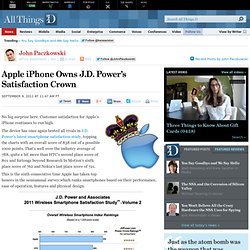 Customer satisfaction for Apple’s iPhone continues to run high. The device has once again bested all rivals in J.D. Power’s latest smartphone satisfaction study, topping the charts with an overall score of 838 out of a possible 1000 points. How Samsung Is Affected by Its Patent Legal War with Apple. Updated: Sept. 12, 2011 at 2:50 a.m. 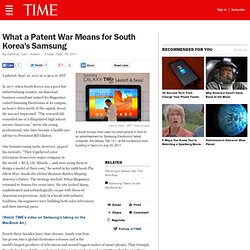 EST In 1977, when South Korea was a poor but industrializing country, an American business consultant named Ira Magaziner visited Samsung Electronics at its campus, an hour's drive north of the capital, Seoul. He was not impressed. "The research lab reminded me of a dilapidated high school science classroom," wrote the young professional, who later became a health care adviser to President Bill Clinton. One brainstorming tactic, however, piqued his curiosity. Y Combinator Challenged By Growing Seedcamp. IT and life lessons from the South Tower. Bob Eisenhardt was an IT pro employed in the South Tower on 9/11. 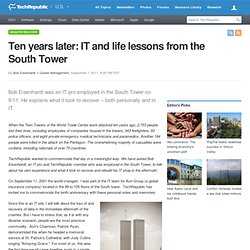 He explains what it took to recover -- both personally and in IT. When the Twin Towers of the World Trade Center were attacked ten years ago, 2,753 people lost their lives, including employees of companies housed in the towers, 343 firefighters, 60 police officers, and eight private emergency medical technicians and paramedics. Another 184 people were killed in the attack on the Pentagon. The Logged Out User. I brought this subject up a while back. 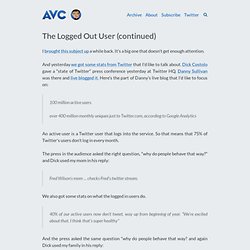 It's a big one that doesn't get enough attention. And yesterday we got some stats from Twitter that I'd like to talk about. The Logged Out User (continued) How Project Gutenberg Changed Literature. Teaching Strategies BoingBoing Project Gutenberg founder Michael Hart. 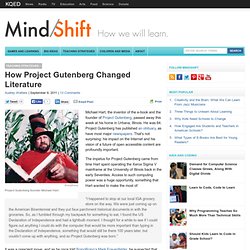 Michael Hart, the inventor of the e-book and the founder of Project Gutenberg, passed away this week at his home in Urbana, Illinois. The Tech World Deserves Better Than TechCrunch. The books business: Great digital expectations. Microsoft online services hit by major failure. 9 September 2011Last updated at 13:19 Microsoft's cloud computing suite Office 365 went offline briefly, along with Hotmail and Skydrive Millions of Microsoft users were left unable to access some online services overnight because of a major service failure.

Hotmail, Office 365 and Skydrive were among the services affected. Microsoft was still analysing the cause of the problem on Friday morning, but said it appeared to be related to the internet's DNS address system. Such a major problem is likely to raise questions about the reliability of cloud computing versus local storage. Windows 8 Boot Time. When it comes to talking about "fundamentals" we want to start with boot time – no feature gets talked about and measured more. 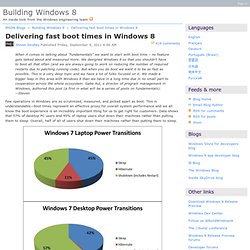 We designed Windows 8 so that you shouldn't have to boot all that often (and we are always going to work on reducing the number of required restarts due to patching running code). But when you do boot we want it to be as fast as possible.