NATURAL BORN CYBORGS? My body is an electronic virgin. 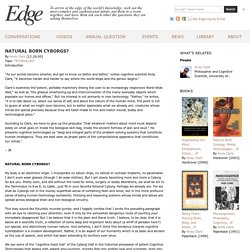 I incorporate no silicon chips, no retinal or cochlear implants, no pacemaker. I don't even wear glasses (though I do wear clothes). But I am slowly becoming more and more a Cyborg. So are you. Pretty soon, and still without the need for wires, surgery or bodily alterations, we shall be kin to the Terminator, to Eve 8, to Cable...just fill in your favorite fictional Cyborg. Carl Sagan - 'A Glorious Dawn' ft Stephen Hawking (Symphony of Science) Zombies. 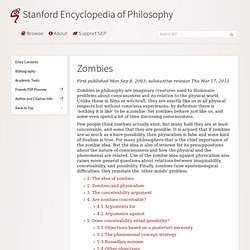 Unlike those in films or witchraft, they are exactly like us in all physical respects but without conscious experiences: by definition there is ‘nothing it is like’ to be a zombie. Yet zombies behave just like us, and some even spend a lot of time discussing consciousness. Few people think zombies actually exist. Qualia. 1. 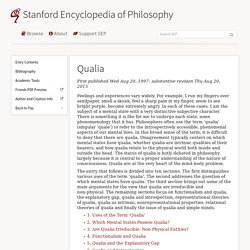 Jill Bolte Taylor: My stroke of insight. Dan Dennett: The illusion of consciousness. Antonio Damasio: The quest to understand consciousness. China brain. China brain In the philosophy of mind, the China brain thought experiment (also known as the Chinese Nation or Chinese Gym) considers what would happen if each member of the Chinese nation were asked to simulate the action of one neuron in the brain, using telephones or walkie-talkies to simulate the axons and dendrites that connect neurons. 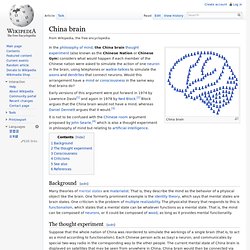 Would this arrangement have a mind or consciousness in the same way that brains do? Early versions of this argument were put forward in 1974 by Lawrence Davis[1] and again in 1978 by Ned Block.[2] Block argues that the China brain would not have a mind, whereas Daniel Dennett argues that it would.[3] It is not to be confused with the Chinese room argument proposed by John Searle,[4] which is also a thought experiment in philosophy of mind but relating to artificial intelligence. Background[edit] The thought experiment[edit] Consciousness[edit] The China brain argues that consciousness is a problem for functionalism. 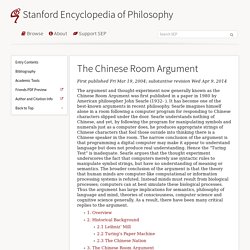 Overview Work in Artificial Intelligence (AI) has produced computer programs that can beat the world chess champion and defeat the best human players on the television quiz show Jeopardy. AI has also produced programs with which one can converse in natural language, including Apple's Siri. Our experience shows that playing chess or Jeopardy, and carrying on a conversation, are activities that require understanding and intelligence. Does computer prowess at challenging games and conversation then show that computers can understand and be intelligent? Dualism. First published Tue Aug 19, 2003; substantive revision Thu Nov 3, 2011. Functionalism. First published Tue Aug 24, 2004; substantive revision Wed Jul 3, 2013 Functionalism in the philosophy of mind is the doctrine that what makes something a mental state of a particular type does not depend on its internal constitution, but rather on the way it functions, or the role it plays, in the system of which it is a part. 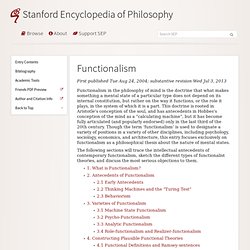 This doctrine is rooted in Aristotle's conception of the soul, and has antecedents in Hobbes's conception of the mind as a “calculating machine”, but it has become fully articulated (and popularly endorsed) only in the last third of the 20th century. Though the term ‘functionalism’ is used to designate a variety of positions in a variety of other disciplines, including psychology, sociology, economics, and architecture, this entry focuses exclusively on functionalism as a philosophical thesis about the nature of mental states. The Mind/Brain Identity Theory. 1. 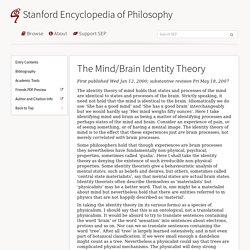 Historical Antecedents The identity theory as I understand it here goes back to U.T. Place and Herbert Feigl in the 1950s. Historically philosophers and scientists, for example Leucippus, Hobbes, La Mettrie, and d'Holbach, as well as Karl Vogt who, following Pierre-Jean-Georges Cabanis, made the preposterous remark (perhaps not meant to be taken too seriously) that the brain secretes thought as the liver secretes bile, have embraced materialism. Behaviorism. First published Fri May 26, 2000; substantive revision Tue Jul 27, 2010 It has sometimes been said that “behave is what organisms do.” 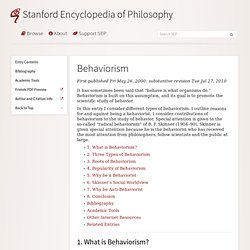