Abhiaiyer91/How-We-Redux-Todos. Building React Applications with Idiomatic Redux - Course by @dan_abramov. How we Redux — Part 5 (Components) — Modern User Interfaces. What is this connection? 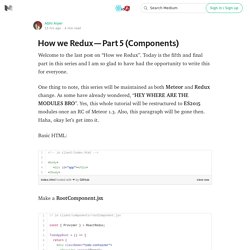 We’ll get into the “connect” function shortly… but first let’s set up the TodoApp component and finish our component tree. Okay, so we have our basic component tree setup! It’s time to get real. We have every piece we need now to finish up this app up! Let’s go through it one by one. Add Todos We have an input field and we are using a ref to grab the value. Connect Revisited Alright, let’s look at “connect” a little closer. React Made Reactive: Components as Observables. React Made Reactive: Components as Observables Over the past year of developing applications using React (both at work and at home), I have had the opportunity to see a steady progression of how I like to architect my projects: from each component having local state (and managing that mess to the best of my ability), to using Flux, and now on to experimenting with Redux and other libraries to try to fill in the limitations and pain points of Flux’s original idea. 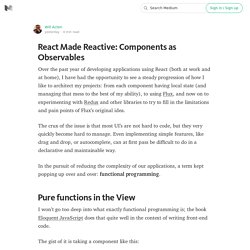 The crux of the issue is that most UI’s are not hard to code, but they very quickly become hard to manage. Even implementing simple features, like drag and drop, or autocomplete, can at first pass be difficult to do in a declarative and maintainable way. In the pursuit of reducing the complexity of our applications, a term kept popping up over and over: functional programming. Pure functions in the View The gist of it is taking a component like this: In fact, this can now be further refactored into a stateless function component:

Redux nowadays : From actions creators to sagas. There's this expression I say each time I stumble on something (some technology) that's going to change my habits in development .... 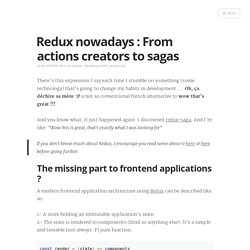 Oh, ça déchire sa mère :P a not so conventional french alternative to wow that's great !!!. And you know what, It just happened again. I discovered redux-saga, And I'm like: "Wow this is great, that's exactly what I was looking for" If you don't know much about Redux, I encourage you read some about it here or here before going further.

The missing part to frontend applications ? A modern frontend application architecture using Redux can be described like so: 1- A store holding an immutable application's state. 2- The state is rendered to components (html or anything else). Const render = (state) => components 3- Components can dispatch actions to the store. 4- The state is mutated using reducers which are very simple pure functions. const reducer = (oldState, action) => newState 5- Go back to 1. No it's not, even if it seems to. Trigger a saga Combining sagas. Redux: Store Methods: getState(), dispatch(), and subscribe() - JavaScript Video Tutorial #free. I added Redux to our application as a script act from CDNGS. 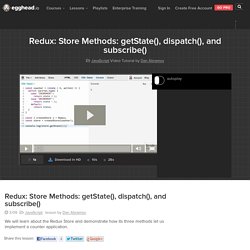 This is the UMG build, so it exports a single global variable called Redux, with a capital R. In real applications, I suggest you to use NPM instead and a module bundler like webpack or Browserify, but the UMG build will suffice for our example. I'm going to need just a single function from Redux called create chore. I'm using ES6 destruction syntax here. It's equivalent to writing, "var creates chore equals Redux.creates chore" or, if you use NPM and something like Babel to transpile your ES6, you can write, "import creates chore," notice the parenthesis, "from Redux. " This chore binds together the three principles of Redux. In this example, we're calling creates chore with counter as the reducer that manages the state updates. The first method of this chore is called get state. The second and the most commonly used chore method is called dispatch. 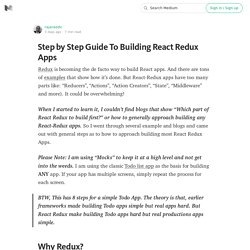 And there are tons of examples that show how it’s done. But React-Redux apps have too many parts like: “Reducers”, “Actions”, “Action Creators”, “State”, “Middleware” and more). It could be overwhelming! When I started to learn it, I couldn’t find blogs that show “Which part of React Redux to build first?” Please Note: I am using “Mocks” to keep it at a high level and not get into the weeds. BTW, This has 8 steps for a simple Todo App. Why Redux? React — A JS library that helps us to divide up our app into multiple components but doesn’t clearly specify how to keep track of the data(aka State) and how to deal with all the events(aka Actions) properly.