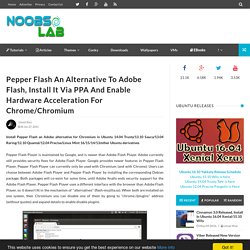 Adobe currently still provides security fixes for Adobe Flash Player. Google provides newer features in Pepper Flash Player. FirefoxNewVersion. When a new version of Firefox comes out, there is some delay until it can be downloaded and run. 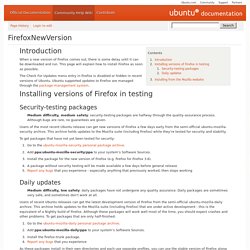 This page will explain how to install Firefox as soon as possible. The Check For Updates menu entry in Firefox is disabled or hidden in recent versions of Ubuntu. Ubuntu supported updates to Firefox are managed through the package-management system. Install / Troubleshoot "ttf-mscorefonts-installer" in Ubuntu  - TuxGarage. The package "ttf-mscorefonts-installer" provides an installer for Microsoft TrueType core fonts in Ubuntu. 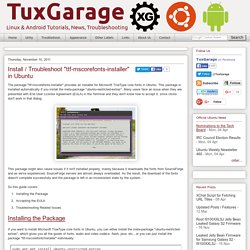 This package is installed automatically if you install the meta-package "ubuntu-restricted-extras". Many users face an issue when they are presented with End User License Agreement (EULA) in the Terminal and they don't know how to accept it, since clicks don't work in that dialog. This package might also cause issues if it isn't installed properly, mainly because it downloads the fonts from SourceForge and as we've experienced, SourceForge servers are almost always overloaded. As the result, the download of the fonts doesn't complete successfully and the package is left in an inconsistent state by the system. Ubuntu Touch 16.04 (Xenial Xerus) Daily Build. Preinstalled touch image The Preinstalled Touch Image allows you to install a preinstalled preview of Ubuntu Touch onto a target device. 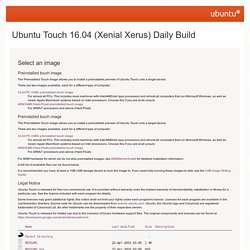 There are two images available, each for a different type of computer: 32-bit PC (i386) preinstalled touch image For almost all PCs. This includes most machines with Intel/AMD/etc type processors and almost all computers that run Microsoft Windows, as well as newer Apple Macintosh systems based on Intel processors. Touch/Emulator. Minimal System requirements for the emulator 512MB of RAM dedicated for the emulator 4GB of disk space OpenGL capable desktop drivers (due the OpenGLES 2.0 translator) Installing the pre-built emulator Instructions Install the ubuntu-emulator package Create an instance (and/or select the desired arch to use) Run the emulator. 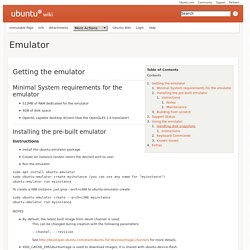 CoverGloobus Is a Customizable Desktop Album Art Widget. CoverGloobus is a desktop music widget Do you remember a Linux app called CoverGloobus? 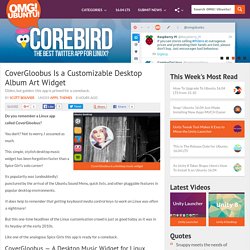 You don’t? Not to worry, I assumed as much. This simple, stylish desktop music widget has been forgotten faster than a Spice Girl’s solo career! Its popularity was (undoubtedly) punctured by the arrival of the Ubuntu Sound Menu, quick lists, and other pluggable features in popular desktop environments. Download. Wallch. What is Wallch? 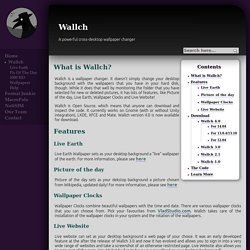 Wallch is a wallpaper changer. It doesn't simply change your desktop background with the wallpapers that you have in your hard disk, though. While it does that well by monitoring the folder that you have selected for new or deleted pictures, it has lots of features, like Picture of the day, Live Earth, Wallpaper Clocks and Live Website! Wallch is Open Source, which means that anyone can download and inspect the code. It currently works on Gnome (with or without Unity integration), LXDE, XFCE and Mate. How to Add a Splash of Color to Ubuntu's Default Look. Ambiance Flat Blue Spring Like the default Ubuntu themes but think they could do with a splash of color? 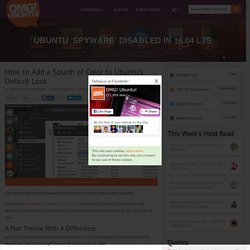 Say hello to ‘Ambiance & Radiance Flat Colors‘ by Ravefinity. This GTK theme pack adds personality to the familiar look of Ubuntu’s default desktop themes through the canny use of color. A Flat Theme With A Difference As you’ll have gathered from the name, the theme is flat, eschewing the traditional gradient step of the stock Ubuntu Light themes for a solid chunk of color. The theme is available in a choice of 13 colors: Gmusicbrowser. Puppy Linux Home.

EasyPeasy. Ubuntu-Touch Theme Updated For Ubuntu 15.10 Wily. Ubuntu Touch is a mobile version of the Ubuntu operating system which is being developed by Canonical Ltd and Ubuntu Community. 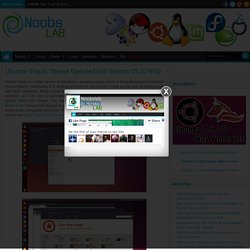 It is designed primarily for touchscreen mobile devices such as smartphones and tablet computers. Xenlism WildFire: A Perfect Icon Theme for Linux Desktops. There are plenty of awesome icons sets are available but when I first time tried Xenlism WildFire, it looks great on my Ubuntu desktop. 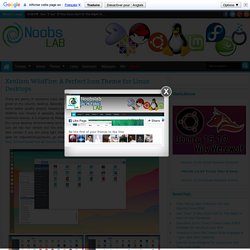 Basically Xenlism is a programming and graphics project to make and deliver some better quality project, keeping minimalism and realism, and putting material design aside. Xenlism WildFire icon theme is specially designed for Unix desktop environments and released under Creative Common license, it is inspired by Meego and iOS icons. The good thing is that it is compatible with most of the Linux desktop environments such as Unity, KDE, Gnome, Xfce, Cinnamon, Mate, and others too.

This icon set has four variant but the only difference between these variants is panel icons, you can choose dark version if you are using light theme and so on. Eyecandy for your GNOME-Desktop - GNOME-Look.org. Nautilus, Nemo And Caja Extension `Folder Color` Sees New Release. Folder Color is a file manager extension available for Nautilus, Nemo and Caja, which until recently could only be used to change individual folder colors.

The tool was updated yesterday with a new feature: you can now use it to easily change all the folders colors with a click: Also, until now, Folder Color only worked with Ubuntu's (default) Humanity icon theme (and other icon themes based on it) however, the latest Folder Color brings support for another icon theme: Numix. For now, Folder Color will only work with the latest Numix icon theme from GIT because it's still work in progress: Since we last wrote about Folder Color, the tool added yet another feature: the ability to set folder emblems. There are just 4 emblems that you can set using Folder Color (Favorite, Finished, Important, In Progress), but that should be enough for most users: Folder Color is available in a PPA, for Ubuntu 15.04, 14.10, 14.04 and 12.04.

Numix - Not just yet another theme suite. RAVEfinity: GTK 3 And 2 Icon Themes. <--- Back To Theme Hub Home GTK 3 And 2 Icon Themes GTK Icon themes change some or all the icons displayed on screen for apps, panels, actions and many other things. They are installed in usr/share/icons or .icons in your home directory. And can be activated with Unity Tweak, Gnome Tweak, Or Appearance In Cinnamon, MATE, LXDE and XFCE. Ubuntu Themes - Get the best themes for Ubuntu. Untitled. There are 5 different themes you can adjust in Xfce: the window decorations, the GTK+ interfaces, the cursors, the notifications, and the icons.

You can find themes on various website, here are some of them: Xfce-Look: Everything, but mixed with other desktop environmentsGnome Art: GTK-themes for the GNOME desktop environments Wallpaper websites with good quality and high resolution images: Window decorations. The 5 Best Cinnamon Desktop Themes (As Chosen By You) We asked and you replied Last week we asked you to send in the best Cinnamon desktop themes you could find. And you did just that. So, one week, hundreds of nominations later, and a hearty helping of opinion later, we can finally share the five themes that received the most nominations. For more details on the desktop environment check out the Cinnamon article on Wikipedia. Been watching a few @Twitch streams in the GNOME Twitch desktop app. It's pretty decent! Command for editing hosts.

Pulseaudio - How to change the default audio in Wine to Alsa only. Use Pushbullet in Ubuntu 14.04 with Indicator & Nautilus Extension. You know Pushbullet? Well, it’s a service that allows you to send links, files and more to your Android or iOS devices from desktop. Most Liked Linux Software. AlternativeTo. Software. Linux Twitter App Corebird Sees New Release, Big Changes. In just a few short years native Twitter clients for the Linux desktop have become an endangered species. Corebird is one of the few remaining desktop Twitter apps still in active development for Linux, making its latest release all the more special. Distributed as source, and focused solely on the GNOME 3 stack, Corebird isn’t the easiest app to find in the aviary. But as its latest release shows, it is fast becoming one of the best. 4 Key Improvements in Corebird 0.9. Corebird. Raspberry Pi - Teach, Learn, and Make with Raspberry Pi. V2 - Software for Ubuntu Linux - Welcome.

Download spotify free (ubuntu) How to Install Spotify in Ubuntu  ·  How to Ubuntu. While Spotify has no supported release for Linux as such, their is, hidden away a little bit, a nice little "Preview" release that runs reasonably well, even if it is not the most native of applications. Spotify. Vivaldi Web Browser Makes Multitasking Online Easier. The team behind the Vivaldi web browser have made a new development snapshot available for download. Vivialdi 1.0.2.249.12 features a number of “nice improvements and bug fixes“, including better extensions support and a new look progress animation. How To Install RuneScape Linux Game Client In Ubuntu. Pidgin – a Twitter client? Since making the switch to Linux I’ve had to find a new Twitter client.

If your on the computer, you can't see my phone symbols. I'm saying I heart Ubuntu. – floridabel