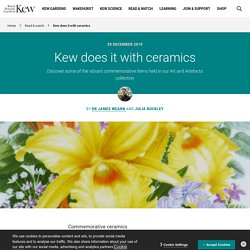 It is crafted from pale blue jasperware (a type of unglazed stoneware) with white relief decoration, producing a cameo effect. The medallion was made by the famous firm of Josiah Wedgwood and Sons – chosen for their quality and perhaps, not so coincidentally, their shared year of establishment, 1759. Although the Kew piece is slightly damaged, similar examples are held by the British Museum, UK, and Birmingham Museum of Art, USA. Anne Allen: Making Art Out of Ideal Flowers. Jay A. 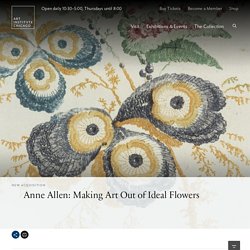 Clarke July 16, 2019 The Art Institute recently acquired a series of color prints by the artist Anne Allen (English, active 1790s). Comprising a title page and four floral designs, the prints were made after drawings by Allen’s husband Jean-Baptiste Pillement (French, 1728–1808). The title of the series—New Series of Notebooks of Ideal Flowers for Use by Draftsmen and Painters—suggests that the flowers depicted were both real and ideal, made for use by other artists in their drawings or paintings. Such printed pattern books were common in the 18th century and included images that ranged from floral designs to furniture and the human body. Prints à la poupée by Anne Allen. 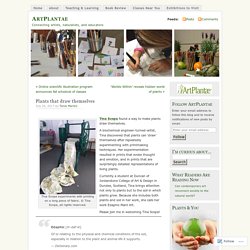 Tina Scopa found a way to make plants draw themselves. A biochemical engineer-turned-artist, Tina discovered that plants can ‘draw’ themselves after repeatedly experimenting with printmaking techniques. Her experimentation resulted in prints that evoke thought and emotion, and in prints that are surprisingly detailed representations of living plants. Currently a student at Duncan of Jordanstone College of Art & Design in Dundee, Scotland, Tina brings attention not only to plants but to the soil in which plants grow. 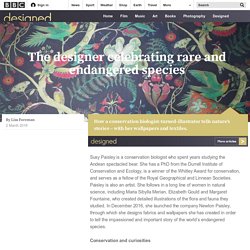 She has a PhD from the Durrell Institute of Conservation and Ecology, is a winner of the Whitley Award for conservation, and serves as a fellow of the Royal Geographical and Linnean Societies. Paisley is also an artist. She follows in a long line of women in natural science, including Maria Sibylla Merian, Elizabeth Gould and Margaret Fountaine, who created detailed illustrations of the flora and fauna they studied. In December 2016, she launched the company Newton Paisley, through which she designs fabrics and wallpapers she has created in order to tell the impassioned and important story of the world’s endangered species. Second nature: five designers inspired by plants. Botanical illustration isn’t anything new but it is becoming increasingly popular as part of a wider greenery trend. 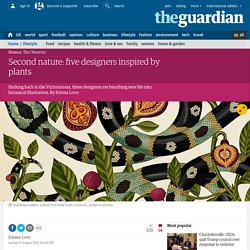 The current Tradescant’s Orchard: A Celebration of Botanical Art exhibition at the Garden Museum in London is showing watercolours by 50 artists and there’s a botany theme at next month’s London Design Fair. Pteridomania in Britain. Creating Botanical Windows for the Flower Show. For the Royal Horticultural Society’s Flower Show in Cardiff this year, we decided to build on previous experience of creating real botanical windows. 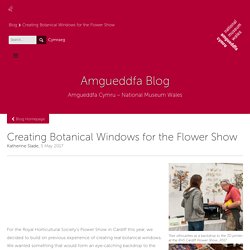 We wanted something that would form an eye-catching backdrop to the collections on display within Amgueddfa Cymru's woodland-themed marquee. The botanical windows began in 2015 with our Museum in a House exhibit for the Made in Roath festival. We wanted a display that would reflect aspects of our Museum work as well as to represent the herbarium itself.

We pressed plants following the standard method for creating herbarium specimens as shown below. 1754 Botanical TV Cover. Mark Catesby Natural History. UW-Milwaukee Special Collections — Plates from Modelli D'arte Decorativa... Grasset La plante et ses applications ornementales. Plants and Their Application to Ornament (1896) In addition to being one of the most in-demand graphic artists of the late nineteenth century, the Franco-Swiss decorative artist Eugène Grasset was also a teacher and theorist. After years of expounding his influential theories at various art and design schools of Paris, in 1896 he published his Plants and Their Application to Ornament, a wonderful pictorial summation of his key idea concerning the use of natural forms as the basis for developing decorative motifs.

From his introduction: An artisan is above all one who has learnt the nature of the vehicle he works in. The next step in his education is the study of natural forms: the step after that is to study and understand the limitations imposed by art principles upon these natural forms when he comes to employ them pictorially or in ornamentation. The book is structured around a visual analysis of twenty-four common plant forms. 'Shepherd's Purse'. Painted signs to promote knowledge of our flora. Today: Marsh Pennywort. Species are more environmentally sensitive than we often think. When it's grown in a pot, this semi aquatic plant can die from being over watered.