Collaborative Intelligence Games. Of World Game Buckminster Fuller wrote: “I review planetary resources in terms of today’s gained know-how, to see whether there’s any way we might be able to do much more with much less, to be able to take care of everybody. 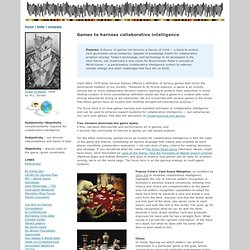 All political systems and wars based on scarcity would become obsolete. World Gaming is played, not like checkers against an enemy but against ignorance, inertia, and fear. The World Game proves that John Von Neumann’s theory of war gaming, which holds that one side or the other must ultimately die, either by war or starvation, is invalid and offers a heretofore unconsidered alternative way to play the war game in which, as in mountain climbing, the object is to find all the moves by which the whole field of climbers would win as each helped the other so that everyone reached the mountaintop successfully.

How did he propose to implement a vision so ambitious? The Tower of Babel speaks to the fundamental requirement of games. References Abt, C. 1970. Taylor, Tim. 6) Critique of Fuller's Dymaxion Map compared to B.J.S. Cahill's Octahedral. Foresight Game Development Workshop » MP CyberBriefing. Catalysts for Change Online Foresight Game April 3-5 - INCO-Wiki. From INCO-Wiki "Catalysts for Change", online foresight game, April 3-5 2012 A new way to think about the future Can games change the way we think about the future? 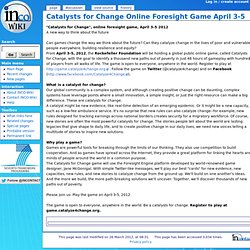 Can they catalyze change in the lives of poor and vulnerable people everywhere, building resilience and equity? From April 3-5, 2012, the Rockefeller Foundation will be holding a global public online game, called Catalysts for Change, with the goal to identify a thousand new paths out of poverty in just 48 hours of gameplay with hundreds of players from all walks of life. The game is open to everyone, anywhere in the world. What is a catalyst for change? Why play a game? Please join us: Play the game on April 3-5, 2012 The game is open to everyone, anywhere in the world. Bringing Bucky Fuller’s World Game into the 21st Century. Foresight Engine. Catalysts for Change: Play the Game. Massive Multiplayer Online Wargame Leveraging the Internet. MP Virtual – MP Futures. This is a peek at the new 3D web campus technology that we are using. 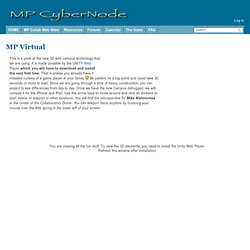 It is made possible by the UNITY Web Player which you will have to download and install the very first time. That is unless you already have it installed curtesy of a game player in your family Be patient, its a big world and could take 30 seconds or more to load. Since we are going through a time of heavy construction, you can expect to see differences from day to day. Once we have the new Campus debugged, we will compile it for the iPhone and iPad. The Millennium Project. Our Story What does your planet look like Is a unique game in several ways. 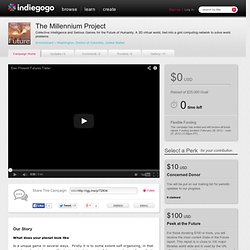 Firstly it is to some extent self organizing, in that people and projects are self selecting into being part of the game design. Secondly it is using a browser based virtual world which does not require special clients or browsers. It is much more intuitive and easy to use have almost zero learning curve. The goal of this campaign is to initiate the next steps in an ongoing effort to bring Collective Intelligence and Serious Games to the world.